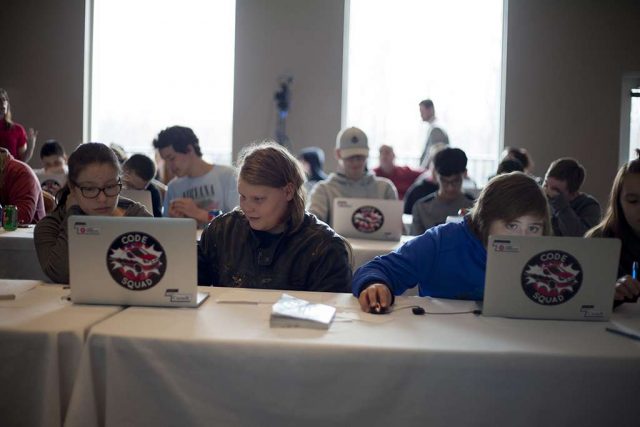 Kahnawake students had the opportunity to dive into the tech world last Friday when they were introduced to the world of artificial intelligence. (William Riley, The Eastern Door)

“The event was to get an introduction for the youth because we’re going to have a training facility in the future for Indigenous people on AI (artificial intelligence technology),” said council grand chief Joe Norton.

“Tewatohnhi’sáktha will be spearheading the programs, so we have to be prepared for this… AI is starting to peak, it’s not just with Indigenous people but it’s all over and I see us as a pioneer in this industry.”

The event was attended by over 30 youth from Kahnawake, Akwesasne, and Montreal with many learning how to handle and use new technology.

Norton has had a history with working alongside the three companies that helped organize the event.

“It started with the main contact three years ago. I was invited to Toronto for an economic summit, and I did a presentation on the MIT (Mohawk Internet Technologies) information that is in Kahnawake. We explained our data,” said Norton.

After the presentation the father/son duo of Murray Rowe Jr. and Sr. approached Norton and introduced their company: Forrest Green.

“They’ve worked alongside Indigenous people and were amazed and wanted to focus on this further,” said Norton. “They brought in Blackberry and Microsoft and another company on software development SAS.”

Norton explained that the event was the beginning of something big, and was pleased to hold the game alongside Nuzio Ruffolo and Murray Rowe at the Host Hotel.

Ruffolo works at Microsoft as a National transformation and AI officer.

“When we think of the great things that we can do with AI, we need to get the youth involved with hands-on experience,” said Ruffolo. “I’ve seen a lot of positive things, energy, and responses and we’re excited to be with them and I think this evolved rapidly considering we started talking with MCK a few months ago on things we can do with data.”

“There are some exciting things happening such as Bill C-92 (An Act respecting First Nations, Inuit and Metis children, youth and families), which was passed in parliament last week. What’s important about that is it’s an important first step on First Nations having more control over their children and handling Indigenous data sovereignty,” said Rowe.

When asked if Indigenous people will be working in this industry of server farms, Rowe said, “The Canadian council surveyed that the lowest employment is in the IT industry, so this is unacceptable. We want to start encouraging the Indigenous youth to work in this field. It’s one of the fastest growing workforces and they can be as skilled as any other group,”

Norton explained that in over a decade he would like to see many Indigenous youths working hard in this field.

“Now what we’re looking at is a national Indigenous data centre, and in there we will take all information from different nations across the country that wish to house their educational information,” said Norton.

“Every nation has information and sensitive information that they want to be protected, so we said that we have a facility that has been in existence for 22 years (Mohawk Internet Technologies), and has a record of protecting information from hackers or outside police force. This is not a money laundering operation. It has nothing to do with cash, just with everyone’s personal information. We have an overwhelming reaction from all over the country, and at some point, we want to look at the United States side of it.”

Norton explained that MCK chief Gina Deer attended a conference in Arizona this week to discuss a business development commission and that she’s bringing the information gathered there to see where it can take them.

“There’s no place else in North America on what we’re calling a sovereign territory data facility,” said Norton.

Norton mentioned that he invited the Anishinaabe nation to Kahnawake to look at the MIT facility itself and have a meeting on the final stages on an agreement to have their information housed here. As of now, no other details have been released on their potential visit.