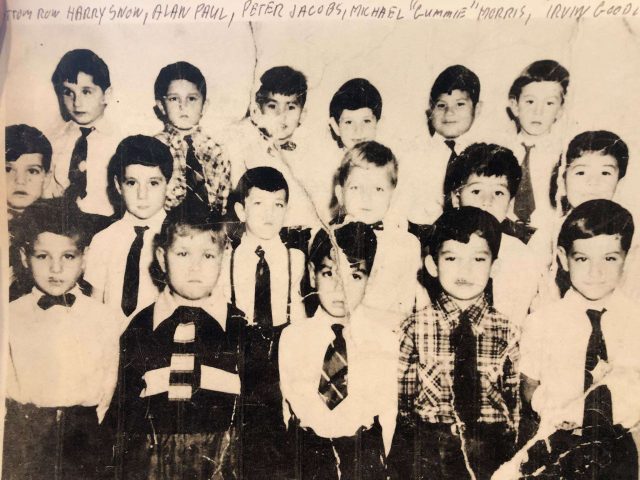 During the Indian Day School era, many elders remember with mixed feelings what life was like when the nuns and priests were in charge of education.

At Kateri School, the bunch of misfits featured in this week’s Blast From the Past did have some good times despite the ongoing abuse and negativity from the school system. Those The Eastern Door spoke to this week took us back to the early 1950s and discussed what life was like in the dictatorship-like order of Indian day schools.

“I’ll tell you what though, out of the entire world, this class was the toughest and craziest class ever. They would cause all kind of mayhem,” said Lionel Deer.

“They would fight with the teacher, but that class was something. I was one of the quiet ones compared to some of these guys. Some of the kids would cause trouble, and one time I went to the grocery store and bought garlic, and we all started eating it, and our principal came in and almost threw up! That school must’ve stunk for a month,” Deer joked.

The sad part of this photo is that more than half of these men are no longer with us, with only a handful left.

“When we were in school, I had this photo all of my life, and I gave it to a friend one year, and years later they gave it back to me sometime in the 1970s,” said Alan Paul.

Paul spoke about what life was like for school children in Kahnawake at the time.

“In kindergarten, we started with boys and girls mixed, but in Grade 4 they separated us. When you went out to the playground, there was a boys and girls side, and the nuns at the time controlled everything. We used to call them the black crows due to their appearance; not many people remember that,” he joked.

“They were very strict, and they had a low tolerance for anything. We got punished all the time from an infraction. All the abuse you realize later, you’re brainwashed into it, so you didn’t have no say in anything, and neither did our parents. They controlled our lives,” said Paul.

Deer and Paul mentioned that one thing they will never forget is that they had their culture and language stripped away from them.

“In all the bad and negativity, we did learn things in school. They taught us math, English, reading, etc.,” said Paul.

“They took our language because when I started school I mostly spoke Mohawk, so I had to learn English, but I remember going to school a lot and getting into trouble because we didn’t want to follow their system,” said Deer.

“We always got the belt. It depended on the punishment how many hits we got. There was always abuse, and we laughed at it. One of our classmates was acting up one day, and they grabbed him, and they threw him on the blackboard and we laughed, but we didn’t know any better,” said Deer.

Paul also explained how in the mornings the students had to lineup, and, if they acted up, they got the clappers. They also had to go to church forcefully and do their prayers, which is why most of the children moved away from the Catholic church.

“I really do wish we were brought up in our culture like the younger generation does now. It would’ve made us into better people,” said Paul.