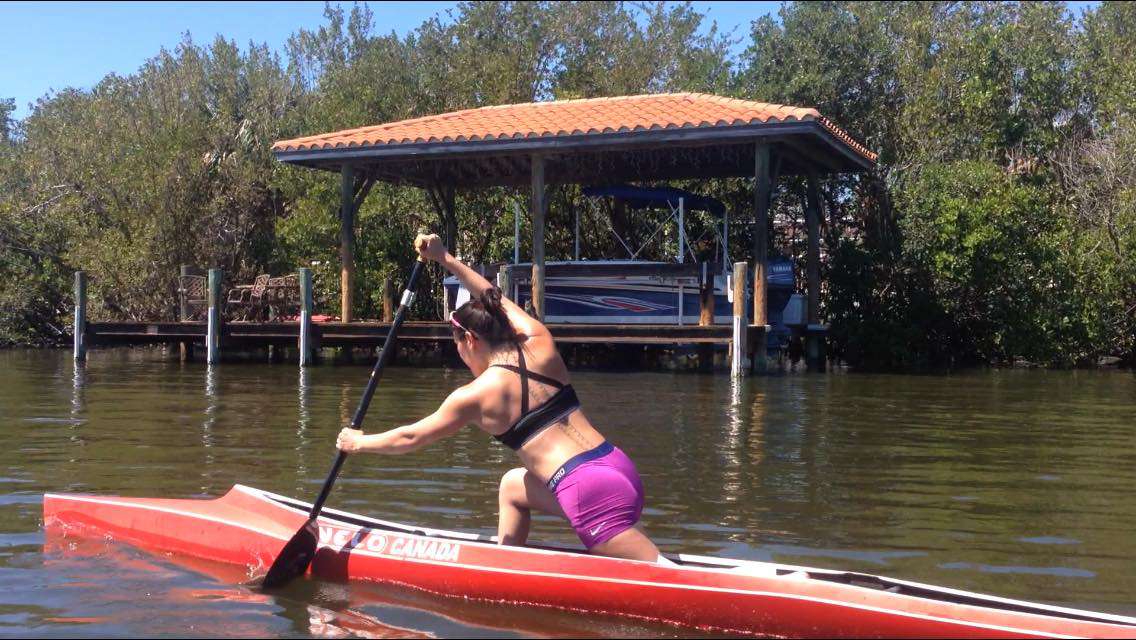 Placing at nationals remains the goal for the year for Konwanakeren Diabo, who is in Florida this week on the water training with the elite paddlers in Quebec. (Courtesy Danny Hallé)

It’s no surprise to anyone that has ever seen the work she puts in on the water that Konwanakeren Diabo was chosen to paddle alongside the Quebec team currently training in Melbourne, Florida this week.

Diabo placed fifth at the nationals last year in the C1 (one-person canoe) category and was put in the Relève category for the team racing out of the Lachine Canoe Club.

“It’s a very intensive program,” said Diabo. “We’ve had at least four workouts a day every day for six days a week.”

It’s the first time for Diabo training with other C1 paddlers at her level.

For those who’ve seen her work ethic and skill, Diabo being chosen came as no surprise.

“I see the work she puts in and the proof is in the results we see improving every summer,” said Onake Paddling Club coach Maris Jacobs, who’s seen Diabo grow from an elementary school paddler to an adult national competitor.

Diabo’s success, Jacobs said, is partly due to her fearlessness at attacking challenges head on, alone if necessary.

“Aside from her training on and off the water, she has a lot of courage and determination in her that I think matters just as much,” said Jacobs.

“A lot of what she has been doing these last few years as a C1 paddler she’s been doing on her own, and she’s never wanted to give it up.”

Diabo is typically the lone paddler in the canoe among the kayakers at Onake.

In between sessions on the water Diabo spoke to The Eastern Door about her goals for year.

“There’s been talk of trying out for the national team, and if I do it, making the team is definitely a huge goal of mine,” she said.

“However, I’m not 100 per cent sure if I’m ready. As for right now, my bigger goal for the season would be to place at the nationals. The current world champion is a racer from Quebec (Sophia Jensen), and trying to catch her time is a huge motivation.”

Jacobs said Diabo’s example has inspired young paddlers at Onake to try out the canoe along with the more popular kayaks.

“It’s really amazing to watch that come to life in the summer,” said Jacobs. “I think what makes her such a good athlete is her hard work in training, but also that she’s such a great person and role model.”

Diabo is ready to bring home the skills she’s learned in Florida and pass them down to the young paddlers this summer.

“Now that I’m being coached (by Danny Hallé), I have a lot of great pointers I can pass on to the others, so I’m excited to see how the girls will do this summer,” she said.

With rising printing costs, large overhead and inflation, small community newspapers like The Eastern Door are finding it increasingly more difficult to keep afloat. But here’s a way you can help:

Also, please consider subscribing to our e-edition, which comes out Thursday night, at www.ed.quanglo.ca today, or pick up your copy Friday morning in Kahnawake, Kanesatake, Akwesasne or Chateauguay.

We exercise real freedom of the press every single day. Without our reporters fighting for the truth our communities would be missing something.

E-transfer donations are accepted at: news@ed.quanglo.ca.

Time to go hard or go home for the Blues

Survival opens season with big win and lots of potential