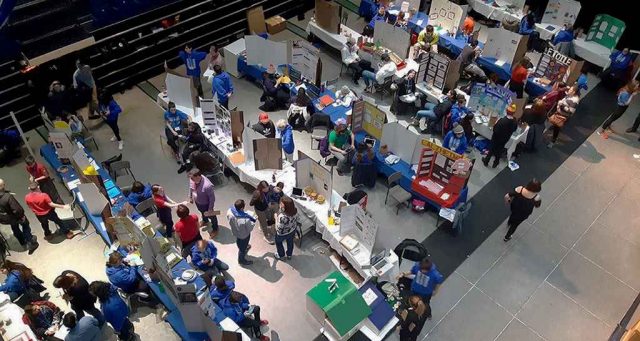 Students from Kahnawake and one from Kanesatake scienced their way to the Inuit community of Kuujjuaq for a youth science fair and made their communities proud by bringing home some sweet prizes. Catch them proudly nerding out over their top-notch science experiments.

Kahnawake science geeks traveled far and wide to the Inuit community of Kuujjuaq to attend the Quebec Aboriginal Science Fair last Tuesday-Thursday, and three local schools got in on the action.

Kahnawake Survival School, Karonhianónhnha School, and Kateri School all sent out students to represent them at the contest.

Also sent to Kuujjuaq was Karihohetstha Cupples, a student from Kanesatake who took home the win with her project on the healing properties of cedar.

The event was filled with projects focusing on modern science, along with the science behind traditional practices.

Representing Karonhianónhnha was Tekaweientehtahkwen Diabo, whose project ‘This is lit’ focused on the idea of heating a room using household items. Teacher Edina Potvin accompanied her and was proud of Diabo’s achievements at the contest.

“She was inspired from the ice storm of 1998, and she wanted to create something in case of another catastrophic event,” said Potvin.

“She created a little heater and tested out the project by raising the temperature by five degrees. She showed and proved this in her presentation, which received positive notes from the judges.”

Although Diabo didn’t win any prize from the science fair, she was asked to do an interview on CBC radio regarding her experience and history behind her project.

The power duo that represented Kateri School was Daisy Paul and Jordyn McComber, with their project on a homemade water drum ‘What’s that sound?’

Accompanying the duo was teacher Dale Rice, who was also proud to see the talent Kahnawake brought to the science fair.

“They were great. They were open to talking to the judges, and they practiced a lot. They both won and received a trophy and a money prize, which was split evenly amongst the two girls,” said Rice.

The duo participated in two judging competitions, one for the main prize and another for side prizes. Both girls were happy to have traveled far to represent their school with their amazing traditional project.

“It was fun, and we enjoyed it, but the food wasn’t the best,” the girls joked.

“Our breakfast every day was a hard muffin and yogurt, which wasn’t the greatest, but we got to try different caribou meat,” said McComber.

“I think our presentation went well, the judges were confused with the project at first, but after we further explained the idea, they got an idea of what we were talking about,” said Paul.

The duo got to experience a new community and didn’t expect to see such a vast difference between Kuujjuaq and Kahnawake.

“There were fewer houses but a lot more land, there was mountains and snow everywhere,” said McComber.

On the final day that there was a massive blizzard that caused their bus to slow down due to the heavy winds.

Unfortunately, the participants from each school were limited this year.

“This was because of the organizing committee in charge,” said Rice.

“They put together a committee to organize and run the fair and the team felt they could only handle so many people, which is why there was so few.”

There was a record total amount of traditional science projects involving a bow and arrow, cedar tea, sleigh rides, water drums, among others.

The concept of traditional plans has jumped in recent years, with the teachers being proud to see how much the students care about their culture.

Representing Kahnawake Survival School (KSS) was Mya McGregor, Akwirahron:ken Bordeaux and Tharonhienhawitha Cross as they showcased their projects of a perfect soccer ball, restoration of Recreation Bay and which wood is best for a bow.

McGregor, who represented grade 8-9 received a second place at the science fair and was also chosen to participate in the Canada-wide Science Fair, which will be a weekend-long event held in Fredericton, New Brunswick from May 15-17.

“My project is on how a certain amount of pressure in a soccer ball can effect the speed it goes, if one ball has a large amount of pressure, the ball will travel far, whereas if one doesn’t, it wont go far,” said McGregor.

McGregor is excited to attend the science fair in May to experience all the projects and to meet new friends.

Bordeaux, who represented Grade 7, also received second place for his restoration of Recreation Bay. Cross won the Cultural Heritage Special Prize for his project on ‘Which wood is best for a bow.’

Tagging along with the students was science teacher Meghan Mueller, who was very proud of her student’s accomplishments in the fields of science.

“We didn’t get to see the community as we were stuck at the science fair, but some of the people were wearing the traditional clothing, so it was nice to see,” said Mueller.

An estimated 50-60 students and projects ranged from grade 5-11.

All of the students from KSS won an award for their projects.

Along with her win, she was chosen to attend the Canada-wide science fair in Fredericton to present her project on cedar tea.

“I came up with this on my own; I had some help from my science teacher. My school doesn’t have science classes for grade 11 students, so I was on my own most of the time,” said Cupples.

“I usually never win science fairs, so it came as a shock that I won. I thought that the other project would’ve won and that I didn’t stand a chance.

‘The process of this project was going out and getting the leaves and boiling it as concentrated as possible. From then on I diluted the leaves, and I surveyed with people from the community to see which one had the best response.”

She is currently in talks with professors to use their labs to test this project further. She is planning on looking into the chemical components to see if it has any antibacterial properties.