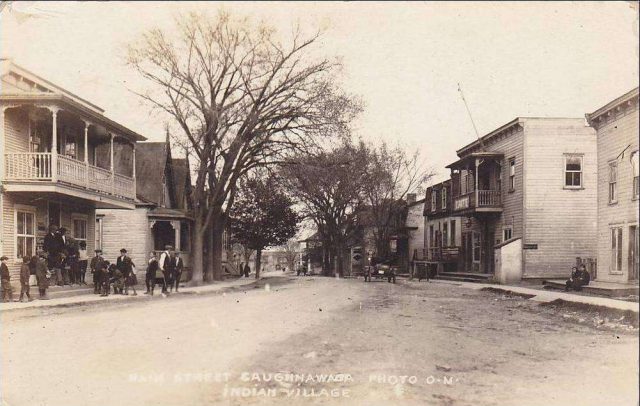 Very few people are still around who remember times like this, when Kahnawake was a different place in a bygone era. (Photo Courtesy Towanna Miller-Johnson)

Home is where the heart is, a place where you feel welcomed and loved. That’s what Kahnawake is supposed to be. It’s a place where friends, family, and memories are made.

No matter the situation, we are the community that will push aside differences and hatred to come together and help one another in times of need.

This photo shows an old Kahnawake, nearly 110 years ago in the year 1910. The photo was taken by the old village, near the church and down by River Road.

After contacting some elders, The Eastern Door interviewed Arlene Standup to get an elder’s perspective on a period that not many remember.

“At one point you would see traffic passing by, you would always see the tourists and non-Natives come to pass through. It was exciting; my grandfather used to sit on the side and watch all the strangers come through town.”

Standup described the weekdays as dull and quiet until the weekend came with all the tourists passing through, observing the small community.

After looking at the photo, Standup was happy reminiscing on what Kahnawake, used to be like.

“The clothes were amazing; I remember everyone had a similar style of clothes. When I was younger people started to stop dressing in the old fashioned way and started to adjust to the modern times,” she said.

Standing out the most is the trees, the trees are no longer there, and it makes many wonders what life was like over 100 years ago. The photo also has a description on the bottom that says ‘main street Caughnawaga.’

“All of these trees are cut down because of the houses being built. Before it had an old country look and when they cut these down, it just made a change of life in our community,” Standup said.

She explained a situation when she was 16, and noticed that the trees were now cut down.

“It was a huge eyesore,” said Standup.

“The trees remained for a long time, and I can remember we were always so used to seeing them. A part of our history was gone that day.”

Kahnawake was more peaceful and quiet during this period, considering there were no cars, no cellphones, and no television.

The photo shows the harsh lifestyle that our people had to live through with the urbanized city at our doorstep. Clothes, food, transportation, and people were different; money was also scarce, with some barely having enough to feed their families.

Many elders have explained that during their childhood, their families were farmers and that some lived off the land.

By the looks of the children and adults (left side), they seem to either have a store or a little hangout with maybe a dozen or so people there. On the opposite side, there appears to be two people sitting down and facing the camera.

“By the looks of it, it looks like some of the older men are tourists, possibly visiting our little community. The general store was once called Porky’s Pool Hall, and most people would stand around and use the area as a hangout.”

Although the photo only shows the small portion of Kahnawake, one would love to see an aerial view of the small community with the vast amount of wildlife in and around the town.

“We were very peaceful back then; it shows how far we’ve come as a people within 100 years. This photo helps bring back memories and stories told by my parents and grandparents,” she said.