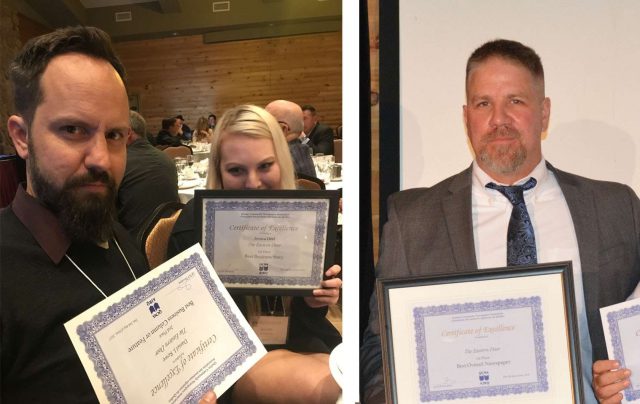 For the ninth time in 10 years, The Eastern Door is vying for top spot in the Quebec Community Newspapers Association, an award TED has won the past two years. (File Photo)

The list is in and the wait is on, as The Eastern Door once again fights two other English-language newspapers for best in Quebec.

“I say this every time and it never gets old: I’m so proud of my staff, from the talented writers, to the ad sales people to our graphic designer and support staff – everyone works so hard to push us to the top,” said Eastern Door editor/publisher Steve Bonspiel.

In fact, TED has been up for best overall QCNA newspaper for nine of the last 10 years – a pretty sweet mark of consistency we’re all very proud of – and a remarkable run never seen before in TED’s 27-year history, only equaled by one other QCNA paper over that long span – the Suburban. We have also one Best Overall Newspaper two years running.

TED will be battling Cree magazine The Nation for supremacy, as well as perennial powerhouse the Low Down to Hull and Back News.

To add to the overall nominations, it was also another solid year from TED journalists.

“I’m grateful to be recognized for my work, and to everyone who has taken the time to speak with me in order for me to write these types of stories,” said Deer. “Stories like this demonstrate the diverse perspectives and complexities to environmental issues in our community.”

Bonspiel picked up two noms in both editorial categories – Best Local Editorial for a piece on blood quantum, and the Bob Phillips award for Best General Editorial for an op-ed on the Canadian government’s apology 10 years later.

“I try to write about things that are relevant to everyone in the community, and I think these two topics hit that point,” he said.

“I also try to challenge people in my editorials – to be better, to want more, to be honest and kind, to question things around them – even my opinions. It doesn’t always work out that way but a good editorial gets people thinking, even if they disagree.”

He also picked up a nomination in one of the toughest categories, Best Investigative Reporting, for dogged reporting on the housing fiasco, which resulted in two separate investigations.

Rowe’s three nominations were quite diverse – a rough piece on the near-fatal shooting in the community last year; a wonderful series on lacrosse, a la President’s Cup; and a gorgeous photo essay on Remembrance Day, which was also credited to graphic designer Dana Marquis, who laid it out.

TED is a member of the QCNA, an association with 30 community newspapers in the province, and will find out who finishes first, second and third at the awards gala and AGM on June 8 in Carling Lake.