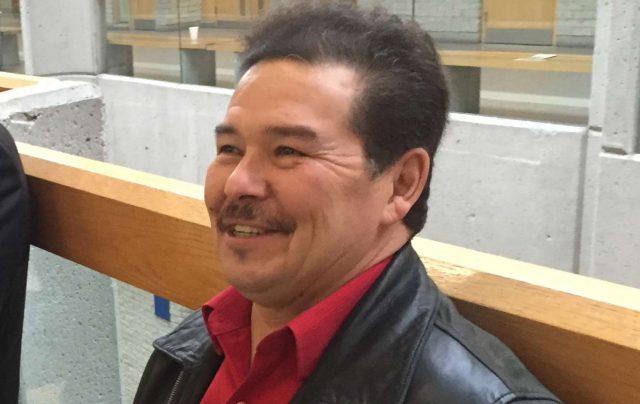 Johnny Jacobs’ case is officially closed and he is happy to move on. (Daniel J. Rowe The Eastern Door)

The Quebec Court of Appeals sided with ironworker Johnny Jacobs in his case against the Mohawk Bridge Consortium, closing the controversial case.

MBC lawyer Pierre Rivard argued that superior court justice Marie Claude Armstrong erred when she found in favour of Jacobs. The appeal, the Court of Appeals judgement reads in French, is based on the argument that Jacobs’ work for Mohawk Painting does not apply to the Fair Wage Agreement (FWA) between the Mohawk Council of Kahnawake and MBC, stipulating certain wages must be paid.

Richard Letendre represented Jacobs, as he had in the original trial.

MBC lawyers told The Eastern Door that they would recommend appealing Armstrong’s August 22 decision in Superior Court after her ruling found Jacobs was owed $133,141.69 for work he did while working in Sterling Deer’s Mohawk Painting fabrication shop, at a lower wage than the one given to those working on the bridge itself.

MBC lawyers argued that work not physically done on the bridge, such as fabrication work in the Mohawk Painting shop, did not fall under the Fair Wage Agreement, and that Mohawk Painting and not MBC, was Jacobs’ employer.

Jacobs’ lawyer argued that MBC was the only company on Jacobs’ pay stubs, and thus he should fall under the fair wage.

Superior court judges Jacques Dufresne, Dominique Belanger, and Suzann Gagne agreed with Armstrong’s decision that MBC was the employer, and Jacobs’ wage discrepancy was owed for work between 2008 and 2011.

“The judge concludes, with reason, that the agreement is not ambiguous,” reads the translated QCC ruling. “That being established, the factual finding of the judge that the appellant is the employer of the respondent is well supported by the evidence, as evidenced by the judgement.

“The judge does not make any error that could justify the intervention of the court when deciding on the scope of the agreement,” the ruling reads.

Jacobs was short on words, though happy his case is finally closed, and the court found in his favour.

“Justice has been served,” he told The Eastern Door.