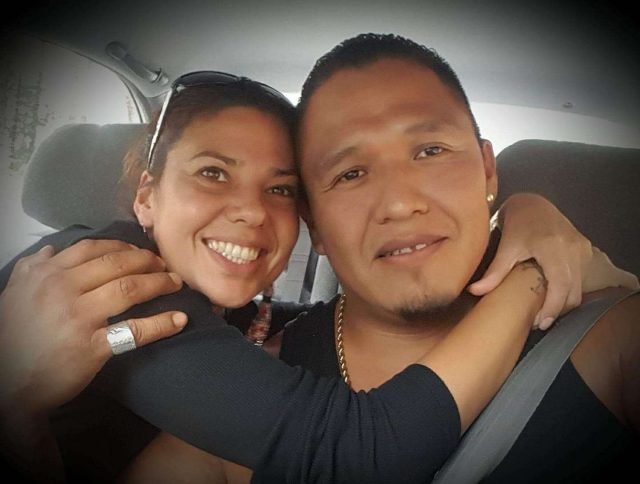 Kahnawake is well-known for coming together in times of need and helping one another, and the most recent time is no different.

Lindsay Delaronde and her family have been struck with news that her partner Guy Louie Jr. has been diagnosed with cancer. Louie has testicular cancer and a large tumour growing in his stomach.

Delaronde’s family, who lives in Kahnawake, has created a fundraiser to help the family out in these rough times. The family also has a newborn baby named Destiny.

Guy is a member of Ahousaht First Nation and is described as very active with his culture, and according to his family, he’s a singer and is known as Elvis.

“This all began with my family, the families on both sides came together after my partner was diagnosed at the beginning of February,” said Lindsay Delaronde.

“The idea came up at a birthday dinner. A lot of the family was together. We were thinking of ways we could help being so far away from where Lindsay is living and the idea of a raffle came up,” said her sister Jillian Delaronde.

The recent raffle-fundraiser has handmade prizes such as baskets, ribbon shirts, paddles, cradleboards and many more.

The news broke out soon after Delaronde had finished an artist residency in Victoria.

“I recently finished my last production, after 18 projects in two years, I planned to relax. Guy was also planning on going back to work and then the diagnosis happen and changed everything,” said Lindsay Delaronde.

The recent news took the family by storm but they have been in good hands with constant support from friends and families.

“My family is so far away from our home in Victoria and they had gotten together to think of ideas on ways to contribute. The fundraiser is an action of support to contribute with our rent cost, bills, and medical costs,” said Lindsay.

Louie Jr. started his chemotherapy treatment on March 4 and is now prepared for the next step in this long journey.

“The body is going to respond differently through the various stages. He’s taking it well, he’s very strong, for 38 years old he’s got his strength,” said Lindsay.

Before the news of his cancer broke, Delaronde brought him and their baby over in December and they met the whole family.

“The gofundme page was released, which made things go public. Some people keep things private, but in our case, we both have huge families that want to help. The more family support, the less stress we have with work and the baby,” said Lindsay.

The family is going through a rough time, but they are keeping their heads up with the constant support Guy’s mom, Pamela Webster, created the go fund me page to help the family with this battle.

“We started to see the donations coming in, it started to release the financial burden. It’s been extremely helpful and we have enough rent to get through his chemo process said,” Lindsay. “After he’s done his chemo, he has a major surgery to go through, and then we recover through that process. Everybody is willing to move with us as we go through this, the doctor mentioned that he has a really good chance of recovering.”

The Kahnawake Cancer Support Group pitched in, as well as many other individuals from both communities and beyond.

Delaronde explained Louie Jr. is going though a very aggressive type of chemotherapy due to the large tumour in his stomach. The plan is to shrink it and remove the debris.

Many people come to see the couple to either visit or to bring good energy to them, including elders.

“We have a lot of cultural people with us, a lot of elders and traditional medicines. The handmade items are all focused on good health and good wellness,” she said.

“We will draw the winners on the Facebook page dedicated to the cause and we will go live in April 1,” said Jillian. “Lindsay and Guy are humbled by the overwhelming support the community has contributed so far.

“They have expressed much gratitude for the monetary support of the raffle but are completely appreciative of the emotional support that they have and are receiving from both West Coast and East Coast family and friends.”

The event on Facebook is titled ‘Fund-raising raffle for Lindsay Delaronde and Family’ with all the information on how to help the family further.

Tickets for raffle items can be purchased from multiple people and places in town.