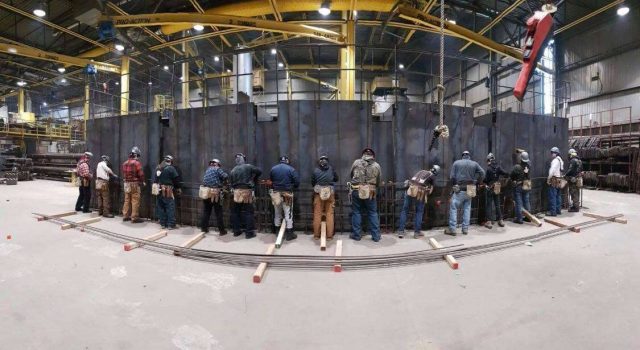 Those studying the fine art of rod busting are almost guaranteed to find work once they finish their program in June, as construction contractors are looking for workers from the community. (Courtesy Konwawennenhawi Diabo)

For the past few years Konwawennenhawi Diabo has been working part-time jobs as she raises her son.

Her uncle told her about a new rod busting course being offered to Kahnawa’kehró:non in English that would set her up in a booming industry with concrete (pun intended) employment.

“I wasn’t sure I was ready to be back in school, but he reminded me I have nothing to lose,” said Diabo.

Shortly following the discussion with her uncle, Lafleur’s Dining Room, where Diabo worked, had a minor kitchen fire, meaning the server would be out of work for over a month.

“It made me realize that my job could be gone in an instant,” she said.

Diabo and 12 others from Kahnawake signed up and began training at the CFMA (Centre de formation des metiers de l’acier) north of Highway 40 at the beginning of January.

The seeds of the course began at a funeral in Brossard that Kahnawake Labor Office certification and competency officer Oliver Montour happened to be at.

“I was speaking with one of the business agents (Marc Cousineau) that represents the rod busters’ sector of Ironworkers 711, it was actually at the district council president’s mother’s funeral,” said Montour.

“We were talking and he was saying there was going to be a high demand, and that’s basically how it started, a conversation at a funeral home on a Saturday afternoon.”

Tewatohnhi’saktha and the Kahnawake Labor Office helped get the students from the community in the program.

The two combined with the CFMA and the First Nations Regional Adult Education Centre to ensure students had all pre-requisites before entering the program.

Students did a site visit before entering, and also swung by the Local 711 hall for more information.

“We all combined forces to make the program happen for them,” said Emily Rice, client support clerk at Tewatohnhi’saktha.

Students will finish mid-June, and, as anyone in the industry will tell you, work will not be in short supply.

“There’s going to be a huge, huge demand,” said Montour. “There are billions of dollars worth of projects in Montreal on the books, contracts ready to go. They were practically begging us for workers.”

Montour said even when the structural work is slow, rod busters are always in demand throughout North America.

“If you’re a rod buster, you’re not going to be out of work,” said Montour.

Centre des formations l’ateliers courses run from 7 a.m. to 2 p.m. Monday to Friday, and students have just finished tying, measurement and handling training and are currently learning to install rebar and footings.

Later they will learn to install rebar in columns, beams, walls and slabs, in addition to some post-tensioning and welding work.

“Any building you see, even if it’s structural steel, it needs to have a footing and in the footing, there’s rebar,” said St. Laurent. “Right now, Champlain, the full slabs and stuff like that are very high in demand, and you have the AMT project for the train that’s going to go all the way to the airport, all those stations, all the rails, everything that’s involved that is in concrete. If there’s concrete, there’s rebar in it.”

Reports back from the program have been positive about the students’ performance in the program.

“I monitor their attendance and they’re all going,” said Rice. “They all seem really eager and ready to learn.”

“So far the course is going great,” said Diabo. “We’re mostly done with the classroom stuff now, so we’re in the shop a lot more often, which is what I like the most, the physical work.”

Being able to offer the course is a great benefit to those looking to get into the construction trade, but who may not want to enroll in a long training program.

“It’s a great opportunity,” said Montour. “There’s tons and tons of work coming up, and the rod buster course itself is a shorter course, so you can get into the field faster. Things like these are one of those opportunities you just have to jump on.”

Montour added 711 is eager to hire locals, and those interested should expect courses to continue being offered.

“They’re actually chasing us to get people,” he said. “They’re begging to get workers, so it’s nice. We have a really, really good relationship with these guys, and hopefully, every year, we’ll do another course because there is work coming up.”