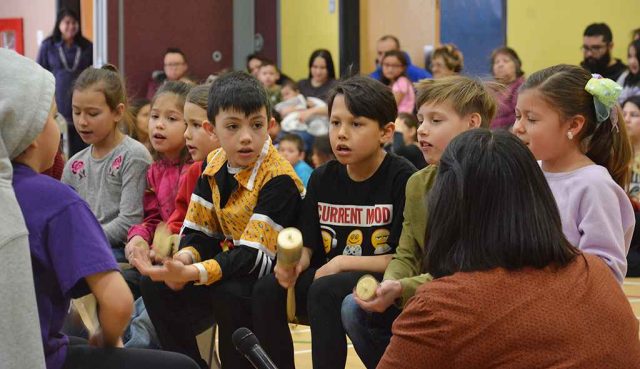 Rotehrhatá:se Lahache (ribbon shirt) is learning Kanien’kéha with the rest of his studies, but is also working on Cayuga, Spanish and French. (Daniel J. Rowe, The Eastern Door)

While many eight-year-olds are bugging their parents for more time to play Fortnite, Minecraft, or road hockey, third grader Rotehrhatá:se Lahache wants to learn languages.

The Karonhianónhnha tsi Ionterihwaienstáhkhwa student is already developing into a fluent Kanien’kéha speaker, while taking steps to develop skill in three others (besides English).

“I’m starting to pick it (Kanien’kéha) up now, and getting better,” he said. “I’m trying to learn as much as I can.”

His talent for dialect goes beyond the Eastern Door, however, as, when he found out his teacher Tehahswthe:tha Doreen could speak some Cayuga, Rotehrhatá:se decided to start learning a second Haudenosaunee language.

“My teacher is from Six Nations and he knows some,” said Rotehrhatá:se. “I saw him talking it once, and I just wanted to try it.”

His teacher is impressed by his student’s desire to learn and excel in the language and other subjects.

“He’s something else, that’s for sure,” said Doreen. “He’s pretty well off in all of his subjects even though I have to get him to do his work sometimes, he can do it really, really well.”

Rotehrhatá:se uses available tools beyond the classroom to practice and build vocabulary.

“I showed him this Cayuga app, and he downloaded it and learned to count in Cayuga,” said Doreen. “He’s better than me now. I’ll get him to do it so that we can practice together.”

Doreen takes his lunch with a fluent Kanien’kéha speaker to improve his abilities, and Rotehrhatá:se, knowing the value of conversing with first language speakers, tags along.

“Most every day, he comes up with us, and he eats with us because he wants to hear it,” said Doreen.

Rotehrhatá:se is intrigued by the similarities and differences between Cayuga and Kanien’kéha.

“You can hear the resemblance, but there is a pretty big difference,” said Rotehrhatá:se. “There’s different letters in it and some of the letters make different noises.”

The son of Kahente Leborgne and Kanonwata:se Lahache knows full well how important the language is to his culture. He speaks regularly with his great-great grandmother Konwaronhia:wi Deer, 82, in Kanien’kéha whenever possible.

“She knows a lot and talks about it a lot,” he said. “She teaches me too. Every time that I get a chance to see her, I try to speak with her.”

Rotehrhatá:se is also working on developing his French conversation skills.

“I just started playing hockey out of town and the coach speaks French, so most of the other players do to,” he said.

Seeing her son’s ability to absorb languages like a sponge excites Kahente, but is also something she was told would happen.

Kahente’s father (Dennis Leborgne) met with a seer when Rotehrhatá:se was around two, who told Dennis that Rotehrhatá:se would have a gift for language.

“He’s like an old soul,” said Kahente. “They always said stuff about him when he was younger. He learned to talk at a really young age.

“This guy (the seer) told him that he’s going to be a speaker and he’s going to carry the language. He told him a lot about him and he was just a baby at the time.”

Seeing her son eager to learn not just one but four languages is an incredible experience for Kahente.

Rotehrhatá:se is far from done at five languages. He wants to continue learning with a goal of speaking with people from the different cultures he’s introduced to on his favourite TV series: Anthony Bourdain: Parts Unknown.

“It’s interesting to learn different languages and know more than one,” he said. “I hope one day, when I get older, I can know that language and go away there and know that I’ll be able to talk to people and do speeches over there.”

He left with a tip for those struggling but wanting to learn Kanien’kéha or any other language. It’s something UNESCO might consider broadcasting globally as it promotes the International Year of Indigenous Languages.

“Have patience and don’t give up and try your best to learn,” said Rotehrhatá:se. “You can’t just learn it in one night.”