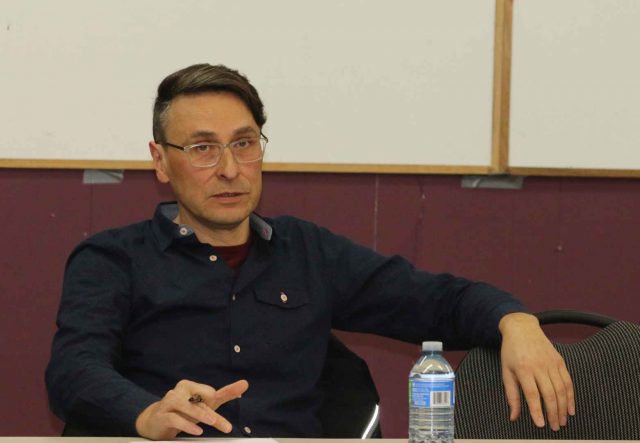 Sylvain “Syd” Gaspé said the main mission of the RKR project is to promote the language and culture. (Natalia Fedosieieva The Eastern Door)

The third meeting of the Reviving Kanehsatà:ke Radio (RKR) group was held in the United Church hall in Kanehsatake last Tuesday, to provide some updates and to discuss current results of the process.

“We’ve discussed with Kahnawake’s radio station more in detail the agreement to re-broadcast and to provide our own programming from Kahnawake,” he said.

“We have retained a lawyer and we are in the process of incorporating, we’ve worked on our mission and vision statements and also on our by-laws and constitution,” Gaspé said.

He said fundraising was one of the discussed topics at the meeting.

“We have an established fundraiser in Kanehsatake, which is willing to help out. It involves youth and recreational activities, which is also going to be a big objective of the station in promoting, so we just need to get some more interested people to help with this fundraiser,” he said.

Gaspé said they also have some other opportunities for fundraising and some ideas to be developed.

RKR has an employee to take care of all administrative aspects, such as taking minutes of the meetings, organizing gatherings, getting in touch with community members and organizations; all from human resources in Kanehsatake.

A space to host a studio is still a challenge, but they already have two options for it, said Gaspé.

“The best option is the lowest cost location. With a temporary studio, we will be able to produce at least a recorded program, that can be re-broadcast from Kahnawake,” he said.

Gaspé said there are some electrical problems, as he actively works to get the power to transmit from an antenna that exists already at the old location.

“As soon as this problem gets solved, we can start re-broadcasting K103.7 in Kanehsatake. We are also actively looking for an ideal new location for an antenna as we need to be high. It is very difficult to expand to reach our audience, because the walls of mountains between us and other communities are really high, and FM signals won’t go over it,” he said.

Gaspé said they need more funds and they’ve applied to different departments, and think they have a chance to get that funding.

“We had submitted a proposal; the council approved that project for us, but the money still has to come from the Ministry of Culture and Communications,” he said.

Gaspé explained the job to digitize material means people will be listening to the language through modern technology, and they are waiting for news on that.

They also talked about the potential US State Department grant that was possible, but it didn’t go through due to a short deadline and they didn’t meet certain criteria.