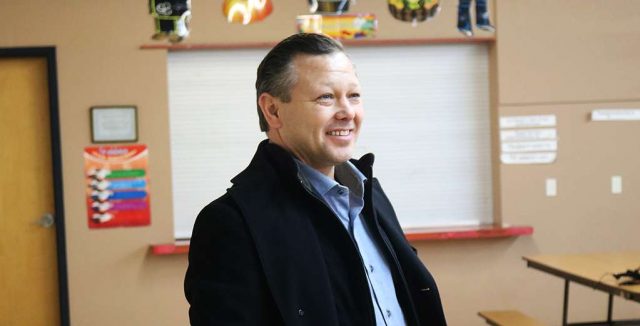 Frank “Fafa” McComber took his seat at the council table Monday after winning Saturday’s election. It is the first time McComber threw his hat in the ring to stand for election, as the JFK Quarry owner replaces Lloyd Phillips who resigned his seat at the beginning of February. (Tehosterihens Deer The Eastern Door)

The Mohawk Council of Kahnawake by-election took place on Saturday, and Frankie (Fafa) McComber took home the win with a total of 155 votes.

Coming in a close second was former MCK chief Christine Zachary-Deom, who retired before the summer’s election, with 131 votes.

A total of 410 votes were cast with one ballot being spoiled.

“It went well, considering there went as many voters as I thought there would be. It could be because of the small number of candidates,” said electoral officer Angus Montour.

“There was a lower turnout for attendance, but during the 2009 elections we had a similar by-election, which resulted in more voters and, so I anticipated a bigger turnout,” said Montour.

The voting process took place at Karonhianónhnha Tsi Ionterihwaienstáhkhwa from 9 a.m. to 6 p.m.

McComber was grateful for the win and was excited to pursue this new journey.

“I feel overwhelmed, I don’t put my expectations too high,” he said.

“They never came around for us who wish to vote. In the previous election, they came around and asked us, but this time no one ever came for me,” said Two Rivers.

“In the previous election, I had to make a point of it for them and ask people if they wanted to vote or not. I waited patiently, and nobody came to see other patients, or me.

“It was a sad oversight on their end. They haven’t approached us, and I believed I had been denied my rights.”

Kateri Hospital executive director Susan Horne did not want to comment directly on that specific matter, but she did confirm procedure.

“We get a letter from the electoral officer and he’ll tell us they’re doing an advanced polling,” she said. “We get a deadline date and before that date we have to speak with our patients and ask them who wants to vote. We put them on a pre-registration list, and x, y, z vote, and they have a certain date to send it back to the electoral officer.

“On the day of the advance polling, Angus’ people will come to the hospital and they will be escorted to the patients who wanted to vote. That’s the process and we designate an individual who handles the pre-registry, and for someone to be here on the day of advance polling.”

“I sent a letter to the hospital, and I asked them (Kateri Hospital) to prepare a list of anyone who is capable of voting in an election.”