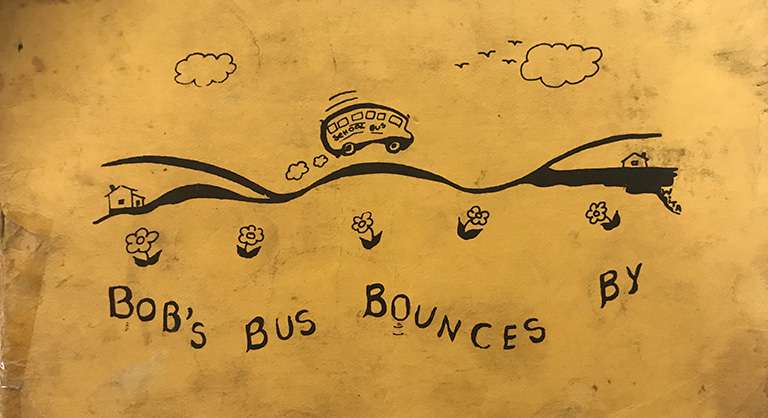 Bob the bus driver was a legend behind the wheel taking the community’s children with care to and from school. He was so famous, a book was made about him. (CourtesyWahsontí:io Kirby)

Kahnawake lost a ray of school bus yellow sunshine on the weekend when the man who gave hundreds of the community’s children a lift to school with care and kindness passed away after a battle with cancer.

Bob Phillips died Sunday with his family nearby. He was 78.

Bob was one of 16 children to Charlotte Jacobs and John Phillips. Bob joins Linda, Thomas, Neuf and Melvina, who passed away before him. Kenneth, Barbara, Patsy, Hazel, Luke, Donnie, Eva, Carol, Perry, Eddie, and Rusty also grew up in a somewhat cramped house.

“They lived in a two-bedroom house, so it was almost like wall-to-wall beds,” said Bob’s granddaughter Wahsontí:io Kirby. “Because there were so many kids, the older ones would take care of the younger ones, so he had experience with babies since he was very young.”

Bob and wife Karen Cross Phillips raised daughter Melanie and son Tyson in Kahnawake, sparing nothing for their children.

“He was amazing,” said Melanie. “He was always there for me. Always made sure that I had everything I needed. We did so many fun things.”

Melanie and Tyson’s mother Karen died in November 2010 after a battle with cancer.

“He loved his cabin,” said Wahsontí:io, one of three grandchildren. “If he could have lived in his cabin, he would have.”

Drop Bob Phillips’ name anywhere in the community and his time at the helm of a Bluebird driving children to school on the bus will come up very quickly.

“He took care of all the children and they remembered him,” said Melanie. “People would always come up to me and say they loved my dad. If anybody was bothering anybody, he didn’t let that happen. Bullying did not occur on his bus and they respected him. They really respected him.”

With respect to the many talented and delightful bus drivers the community has produced, only Bob had a children’s book written about him.

Kakaionstha Deer wrote Bob’s Bus Bounces By in 1974 celebrating the local driver’s kindness and care behind the wheel. It quickly became read by many of Kahnawake’s children and parents including his grandchildren.

“I read the book in class,” said Wahsontí:io. “They brought it out, and I was looking at it, and said, ‘is this my baba?’ and they were like, ‘yep…’ All the teachers talked about my baba all the time, which was really cool. Every time he walked into Karonhianónhnha everybody would wave and smile at him.”

“Even into my adulthood, people would find out who my father is, and they’d always say, ‘he was my favourite bus driver,’ all the time,” said Tyson. “That he would bend over backwards for those kids.”

“Sometimes when you’d say, ‘Bob’s my dad,’ you would kind of get better treatment from people,” said Melanie.

No matter whom he was with, Bob always wanted to ensure the mood was light and people were happy.

“He was very funny, very sarcastic,” said Wahsontí:io. “He knew how to crack a joke in every situation. He knew how to make himself the funny man in the room when things were getting too serious.”

While driving at the bus for his day job, he also sold cars for Paul Tremblay in Laval. He was not, however, a high-pressure car salesman in any way, shape or form. His selling style is one that would baffle modern shoppers.

Bob went from driving to work to working at dispatch, and then at Lafleur’s Golf Club. It was his second stint working the links, having picked up a job at the Kanawaki Golf Club when he was eight.

“He would pick us up all the time, and we’d take the bus to his house after school, stay at his house, and he’d take care of us there,” said Wahsontí:io, whose father Daniel Kirby worked as an ironworker away for much of her childhood.

At family dinners, Bob always made sure the children ate first, and would sacrifice his own tastes for their happiness.

Just over seven years ago, Bob introduced the family to the second love of his life, Pinky White, whom he remained a loving partner to until his dying day.

“It was his birthday, at the Bayview in November 2011, he invited her,” said Tyson.

Pinky was swept away by her partner.

“He was the sweetest man you’ve ever met. The most loving, caring man you could ever meet,” she said.

He always made sure his partner felt special and on a pedestal.

“He always said, ‘the woman, that’s your queen,” said Pinky. “He spoiled me.”

Two years ago, Bob was diagnosed with multiple myeloma, a cancer of plasma cells, a type of white blood cell normally responsible for producing antibodies. His health deteriorated while he went for chemotherapy and other treatment, but Bob never, throughout all the pain, lost his sense of humour and kind disposition.

Wahsontí:io spent the summer accompanying her baba to his chemo appointments after he was first diagnosed, as Tyson and Melanie both worked fulltime.

“It was difficult, but even there, he wouldn’t stop cracking jokes,” she said. “We would speak Kanien’kéha in the hospital and when he wouldn’t understand something in English, I’d say it to him in Kanien’kéha and he’d have a clear understanding of what it was.”

He was constantly joking with the nurses at Mount Sinai Hospital in Montreal and Kateri Hospital in Kahnawake, who the family is forever grateful to for their kind and respectful care.

“They would always tell me, ‘your father is so nice,’” said Melanie.

Call him baba, father, uncle Bob, bus driver or friend, Bob Phillips’ light seems destined to shine for all those who knew him.

“People were drawn to him,” said Pinky. “There was just something about him.”

Family man and fighter for the average Joe passes

Browder Foundation gets help from Kahnawake