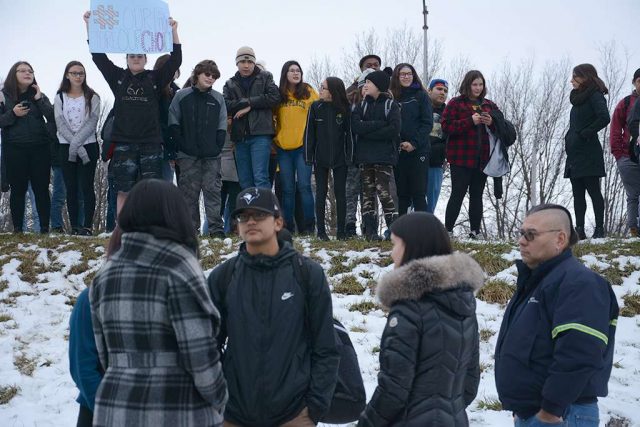 Protests in November at KSS revolved around ongoing tensions at the time, which included disciplinary actions taken against five students who were sent home that day. (file photo)

The Eastern Door asked what a recently reinstated student thought Kahnawake Survival School was all about.

“I’d say family, but I can’t say that after this,” said Thunder, who was one of five students asked to leave the school at the end of November, thinking they were expelled before being reinstated January 15.

(Thunder is not the student’s real name, which has been withheld to protect the minor, along with the names of any parents of the students).

The Kahnawake Education Center (KEC) has begun the process to investigate staff actions or inaction at KSS, and its policies and procedures related to the disciplinary actions against students for violating the school’s drug policy.

The five students’ mothers forwarded a complaint letter at the Kahnawake Combined Schools Committee meeting January 16 that, among other things, requested some in the administration to be suspended immediately while the investigation was ongoing.

“The issue that they’re bringing up will be properly reviewed in due course,” said KEC director Robin Delaronde. “I know they are concerned parents, but as the education system, we really cannot be hurried or rash in any decisions or the process that we’re going to take in terms of reviewing this because it would not be a benefit to either position… We really have to make sure that we are following the proper process and moving forward appropriately.”

According to Thunder, the students allegedly left school grounds Wednesday, November 28 at lunch and returned and met with a teacher, who saw them leave and convinced them to admit to smoking weed. Then, Thunder said said, the students confessed and were made to stand in front of the entire student body, admit what they had done, and say they were sorry.

“We all felt terrible,” said Thunder. “It was like we were being forced to do something that we knew wasn’t the right way, but we thought that it was the only way. Once, we thought, that was done, we’d just be able to leave.”

The next day, the school’s student council grilled the students on where they got the weed, admit their fault again, and said they would decide what the punishment would be.

“They said we believe that you were all telling the truth, but we didn’t decide yet,” said Thunder.

The complaint letter says that parents were not notified until Thursday evening of the previous two days’ events, and were asked to keep their children home for the day (Friday, November 30).

Thunder said the ordeal made it impossible for him and the other students to concentrate throughout the week, and it was difficult walking the halls when they returned to school last week.

“It was constantly in my mind, ‘what’s going to happen next?’” said Thunder. “Even now, a teacher approached me today (January 15) and said something to me. He came up and said, ‘what are you even doing here? Aren’t you on a contract and you’re already acting up?’ I wasn’t even doing anything.”

One student felt they should be given a second chance, with another feeling it wouldn’t be fair to other students who have been expelled in the past for drug use, if the students were allowed to stay at school.

Survival School’s student handbook dictates that a student will be expelled for the balance of the school year for “violation of the drug and alcohol policy,” and that students are not permitted to leave the school grounds without reporting to the administrator or receptionist.

Further, “Should the odour of drugs and/or alcohol be present on an individual, a parent will be called to take the individual home for the day,” reads the handbook.

Delaronde said the Kahnawake Combined Schools Committee and the KEC will look at the policies in addition to the student council’s function if such a situation reoccurs.

“Those are things that we have relayed are going to be looked and addressed and reviewed,” said Delaronde. “In terms of student council, looking at what are the guidelines, what are the processes, what is the intent and what is the structure of it, and that clearly needs to be reviewed.”

Part of the frustration for students and parents was poor communication from the administration and inconsistent actions in relation to policies and protocols.

December 7, parents were sent a letter from Delaronde saying the students were expelled for the school year for violating the drug policy, but the decision was reversed in January.

A December 4 letter from attorney Philip Schneider to the mothers reads, “it is our legal opinion that the process used did not follow the Student Handbook in this matter.

“It is our legal opinion that the “investigation” in this matter was illegally done in violation of KSS’ own Student Handbook. Further the rights of these students were violated…

“The procedures leading to this stage of the proceedings have been fundamentally flawed by the administration. The rights of these minor children have been violated,” the letter reads.

Kahnawake Combined Schools Committee KSS representative Karonhiio Curotte said the matter is a human resources issue, and that the committee’s role is solely for supporting the investigators, should the need arise.

“We just get what the findings are,” said Curotte. “With this one they’ve decided to bring in a neutral party and have it done, so that nobody can say it wasn’t fair.”

Due to the heated emotions involved, Curotte is not sure the report will satisfy everyone.

Delaronde said the KEC has begun exploring external resources for the investigation.

Mohawk Council of Kahnawake portfolio chiefs Harry Rice and Ross Montour replied to The Eastern Door’s requests for an interview with a statement via email.

“It’s a matter internal to the Kahnawake Combined Schools Committee, and, as such, we prefer not to comment at this time,” the statement read.

Though Thunder understands he and his friends made mistakes that day in November, he was more upset that his school’s council and administration didn’t seem to care to follow protocol or consider the effect of what they were having on the kids.

He, along with the parents who complained, feels protocol should have been followed.

“The whole situation could have been done if they would have just followed protocol because protocol says that if they suspect it, they call their parents, their parents come in and they search us while the parents are in the room, and if nothing is found on us, we come back to school the next day. It’s just a one-day suspension,” said Thunder.