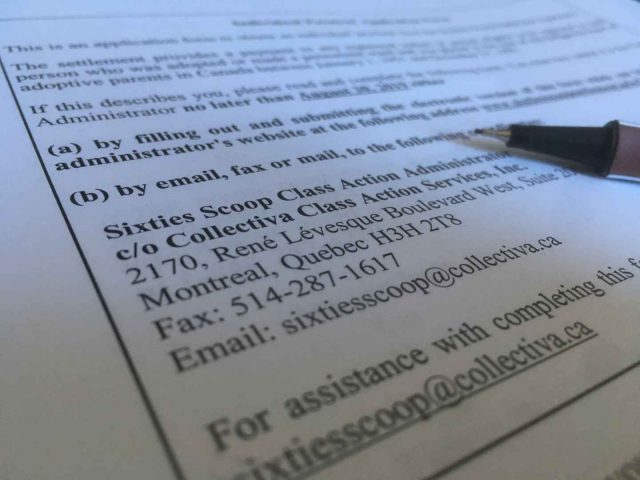 “If there’s one thing that everyone should leave here understanding, it’s that if you are uncertain, or if we’re unable to tell you if you’re eligible or not – submit your form, submit your application,” said Melanie Vincent of those ’60s Scoop survivors seeking compensation. (Lindsay Richardson, The Eastern Door)

The phone calls to Collectiva started long before formal information sessions began: survivors of the child welfare system – or Sixties Scoop – reaching out to tell their stories, and to inquire whether they were eligible for some form of compensation by the federal government.

At Tuesday’s information session, held at the Maison du Developpement Durable in downtown Montreal, Melanie Vincent – charged with relaying information about the compensation claims process to the public – wanted to make one thing clear.

“If there’s one thing that everyone should leave here understanding, it’s that if you are uncertain, or if we’re unable to tell you if you’re eligible or not – submit your form, submit your application,” she said.

“It’s very important to understand we’re not here to judge whether you’re admissible or not. What’s important is to complete the form to the best of your ability.”

Tuesday’s gathering was one of 21 information sessions to be held across Canada to inform survivors of the Sixities Scoop how to apply for compensation ahead of the August 30 deadline.

Last October, the Canadian government approved the investment of $750 million in a settlement fund for child welfare or Sixties Scoop survivors.

Upon completion of the claims process later this year, those who are eligible will receive a cheque for an amount between $25,000 and $50,000 – depending on the number of claimants – by the year 2020.

According to Vincent, 9,000 claims have been filed by Indigenous people in Canada since Collectiva began giving these information sessions in early December.

“I’ve heard stories where they’re left at the hospital, or the social worker comes and takes them out of their mother’s arms right after birth.”

“There’s so many different stories – and this is the hard part, hearing these stories and being there to comfort each other,” she added.

Normandin was thrust into the child welfare system from birth, when she was taken from the hospital, placed with a non-Native family, and later put up for adoption. She was raised in LaSalle by a single mother, within arms reach of her home community of Kahnawake.

Ahead of the public session, Normandin says her clients have expressed concern about filling out the application and are usually worried about having the proper documentation.

Collectiva outlined simple – yet firm – guidelines for potential applicants. The settlement, they were told, does not apply to Indigenous people who experienced physical, sexual, or psychological abuse; it applies only to status Indians who can prove a significant loss of cultural identity.

The amount of people applying also does not affect the amount each person could get.

Some ventured from Ontario and the United States hoping to have their questions answered, things like  “do I need a lawyer?’ or “what if my records were sealed at birth?”

According to Vincent, no legal counsel is needed to fill out an application.

In order for it to be considered “complete” by Collectiva’s standards, the application only requires a signature, an Indian status number, an address, and a phone number.

As for sealed records, the application for compensation includes a section where the claimant can give consent for federal officials to procure documents that fill in some of the figurative – and literal – blanks in the application.

Some claimants, like Nakuset – executive director of the Native Women’s Shelter and Sixties Scoop adoptee – were somewhat relieved in the moment to hear about the streamlined application process.

“It was a real relief for me to know – because I felt like I was behind the entire process,” she said. “I came there to do business. I did the application, and then I hung around because there were people trickling in that I haven’t seen.”

“It’s a really daunting process to request to have this money,” Nakuset added.

To survivors, the estimated number of applications filed so far after sessions in Vancouver, Thunder Bay, Toronto, and Prince George, seems low in the overall scheme of things.

Across Canada, it’s estimated that over 20,000 Indigenous children were targeted by the Sixties Scoop.

If a potential applicant is deceased, however, a claim can still be filed on their behalf, so long as it can be proved the person in question was alive in 2009.

At the local gathering, concerns were raised about whether the session was promoted enough, or, additionally, whether the government has a responsibility to disclose and inform claimants of any additional information that may be unearthed.

“It feels like you walk into this room, you there are all these images of you growing up – poor little Indian girl in a white family – and the government says ‘this is your life, here’s $50,000,’” Nakuset said. “It’s super surreal. It’s like, ‘this is what I get?’”

“The government is going to go through the trouble of finding these documents for people who have been searching for them their whole lives – this is our life, someone is holding our life hostage,” Normandin added. “If someone went to the trouble to find these files – then give us copies.”

In the meantime, however, activists, survivors, and outreach workers are making sure the information continues to ripple out in the Montreal area, and continue to reach the necessary people in the eight months still to come before the application period closes.

Normandin, for her part, has been carrying English and French applications in her backpack on daily outings, along with envelopes, and stamps, in case a client decides they want to make a claim.

“If I can just be with them when they fill it out, if they want to talk for an hour – I’m there to listen. I don’t have any answers for anybody, but I listen,” she said.