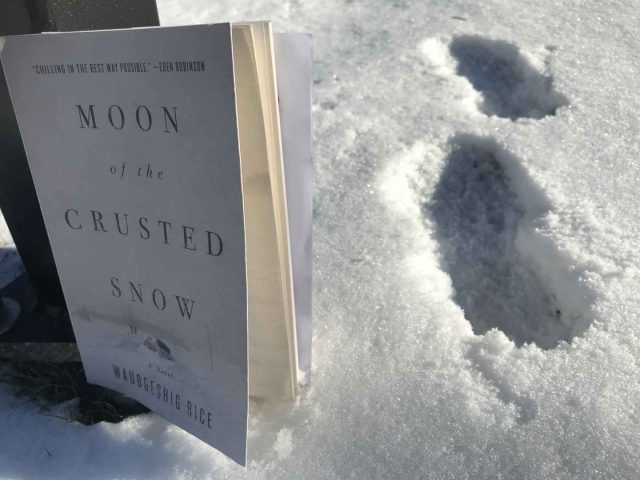 Let the snow fall outside, while you sit in a cozy chair and read an incredible thriller rooted in Anishinaabe culture, and a very real potential threat. (Daniel J. Rowe, The Eastern Door)

You need not go far to find a post-apocalyptic thriller set in a dystopian world where a group of people are cut off from the rest of the world, forced to survive without the trappings of the modern society.

Some have zombies, some have monsters with super hearing, and some don’t even explain what is causing or caused the world to become a bleak and desolate landscape.

The suspense set up that Ojibwe author Waubgeshig Rice pulls off in Moon of the Crusted Snow (ECW Press, $17.95), however, is completely unique, simple and excellently executed.

Rice cuts the power in the remote northern Anishinaabe community where the novel is set, forcing community members to fend for themselves, as the snow piles up and temperature drops.

The setting is perfect, as Rice is able to not only examine a community cut off from the modern world, but also the community’s state in the modern western world. Rice shows how the trappings of reservation life have caused disconnect between some of the community members and their traditional Anishinaabe way of life.

With the emergency raging, Rice explores how that disconnect has caused members to become overly dependant on welfare, young men unable to hunt or trap, and a band council unable to respond to outside aggression.

Protagonist Evan Whitesky guides the reader through the community as he struggles to calm his friends, feed elders and keep people sane throughout.

Things get complicated when the imposing white man Justin Scott shows up under mysterious circumstances offering to help out. Scott is a tough character to get behind as a reader, and perhaps the only gripe.

It is clear very quickly that he’s set up to be the villain, but has zero redeeming qualities, which makes him somewhat one-dimensional. While non-community member functioning as villain is fine, it makes the story more compelling if they are somewhat more complex, or a reason is given or implied for their villainy.

On the other hand, Scott’s introduction amps the tension up and creates the key point of human conflict in the story, especially as people start dying and food begins to run low.

Sticking with conflict, Rice has developed a multi-layered template of how to develop conflict. There is human against human characterized in the protagonist Evan and antagonist Justin, but also human against nature (obviously), culture against culture (internally and externally), and the protagonist against himself.

All these conflicts arise throughout to varying degrees, and they all weave together to make the book about so much more than the power going out and people having to fend for themselves.

Rice also adds words and phrases in Anishinaabemowin throughout the book, in addition to small ceremonies and other aspects of the culture, which is such a treat. It is another great lesson to those writers, artists or other creative producers wanting to promote culture and language in a way those absorbing the media can appreciate, without having to do vast amounts of background research.

I read this book, shortly after finishing the Netflix movie Bird Box, and found it interesting how similar the tone was in the two works. They both dealt with situations of panic and adaptation to stressful situations, but with a very different cause of the frustration.

This is perhaps the scariest reflection.

A power outage prompted the same type of panic and disconnect that a mythical (and unexplained) monster who forces people to commit suicide. It doesn’t speak volumes for society if all it takes to force mass panic is to turn off the lights.

There, There sets bar on Indigenous urban stories

All Our Relations a worthy follow-up from Talaga