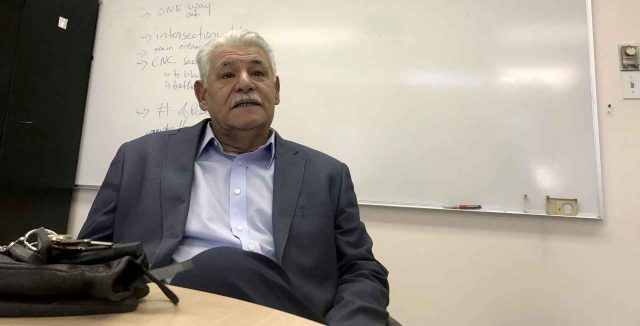 Ron Skye has more than four decades of public service in his rearview mirror, as the 62-year-old commissioner of public safety looks forward to golf courses and a good book. (Daniel J. Rowe, The Eastern Door)

Friday at 4 p.m., commissioner of the Public Safety Unit Ron Skye will leave the office for the last time after over two decades working in the justice department and over four decades of public service.

“The only plan I really have had for about 25 years is that I wanted to retire when I was 62. I’m there now,” Skye told The Eastern Door yesterday.

Skye made the decision in early spring to call it a day, and spoke with MCK executive director Alana Goodleaf-Rice about leaving in September. It took a number of months to find a suitable candidate to fill the role, which current Mohawk Council of Kahnawake chief Lloyd Phillips will take on as director of public safety.

Over his tenure, Skye has seen the community change, and he knows it will continue to change, so Phillips’ role and responsibilities will be much different from the current one.

“We’re growing. We’re evolving as a society and the demands are a little bit different,” said Skye.

“We’re no longer a small community within the heart of the community. If you take a ride around, and look at all the new buildings that are built on the outskirts, we’re expanding just like anybody else, and we have to keep up with the times.”

Skye’s path to commissioner of public safety includes a long history of public service. He became a Peacekeeper in 1976, and was let go with the rest of the force in 1979 when the department was restructured.

He came back to the force in 1982 after a stint in the ironworking industry, and worked as an investigator, then assistant PK chief, then chief of police. He left the force in 1988, and returned to public service in 1995 to fill the role known then as court administrator.

The role became director of justice, which he held until taking the commissioner of public safety post two years ago.

Skye was able to achieve his position through hands-on experience, and always striving to learn and train to be better informed.

“I guess it’s self taught. I’ve taken a lot of professional development courses, but in reality I have a grade 10 education,” he said with a laugh. “I’ve learned from the ground up, so to speak, fell down a lot, scraped my knees and learned from my mistakes. I think it’s been a benefit to me. I’ve had the opportunity to work with the community from a grassroots level.”

Skye played and coached hockey, lacrosse, football and other sports, which helped him to build networks throughout the community in addition to his work in ironworking. He has travelled around the world, always taking opportunities to learn from and about others.

“Taking that life experience from working with individuals in the community, I just kind of transposed that into what I did and used a common sense approach to dealing with conflicts and issues,” said Skye.

In retrospect, Skye said he would like to have had more patience when he first joined the police force in 1976, but that even those mistakes he made early on were important.

“Looking back, I wish I was a little bit more mellow,” said Skye. “But it was a learning experience, and I learned a lot from that. I think it’s helped me in both my personal and professional career.”

Going through the steps from policing to the justice department developed a perspective Skye found valuable in expanding the Kahnawake justice system.

In the early ’00s Skye and others looked at the system in place, and developed ways to develop laws and adjudicate them locally but separately.

Skye wrote a proposal to federal and provincial governments looking at restorative justice, which was accepted, creating the Alternative Dispute Resolution system.

The group then worked on ways to create laws outside the Indian Act that would apply to Kahnawake and can be heard by a justice of the peace.

By the middle of the decade, summary convictions (not major offences) were heard in the community, and no appeals have been made.

The next step was developing the Kahnawake Justice Act, which was approved in 2014, although a local justice system is yet to be implemented. Skye knows work remains to be done, and that the system will continue to evolve with technology and other areas.

Skye said political will is always needed from all levels to move forward on matters such as justice, and that communication is key.

“It’s about dialogue. It’s about understanding,” said Skye. “We have to understand that as much as we want to look at it from a sovereign perspective, any nation or nation-state always has to have some type of relationship, liaison, reciprocal arrangement with its surroundings, other nations. When we talk about reciprocity, it’s a two-way street.”

Walking away after so long at the job may not be easy, but it’s not something Skye is afraid of.

“It’s always hard to just walk away. People who know me know I can’t sit still, I’m not a sit at home kind of person,” he said.

The “voracious reader” and golf enthusiast is connected on national policing boards across the country that he will remain in contact with, and he said his knowledge and experience remains something that can be tapped when needed.

“I’ve made it very clear to all my counterparts within the MCK organization that if they need some corporate memory since I’ve been here so long, feel free to ask,” he said.