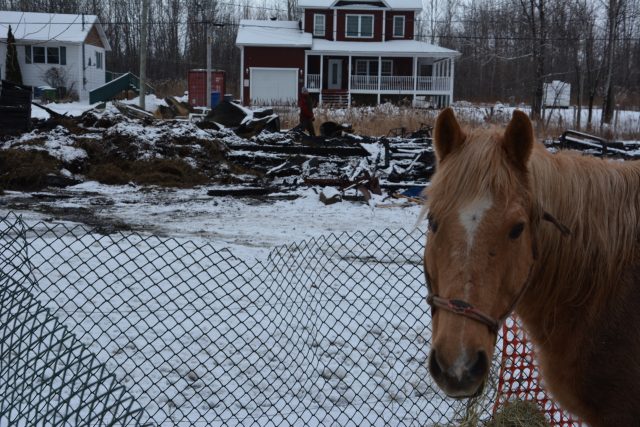 No horses were harmed in the blaze that destroyed the barn in South Texas, but two bunnies were not so lucky, despite attempts from those at the site. (Daniel J. Rowe, The Eastern Door)

Cynthia Jacobs left the ranch last Tuesday (January 8) night to get fuel for the generator that runs electricity in the barn in South Texas, where she and her fiancé Chris Homer keep three rescue horses and other animals.

Less than 20 minutes later, tragedy struck, and within the hour, the barn was beyond saving.

“He (Chris) dropped me off at home, and I see the PKs flying down South Texas, and I thought, ‘what the heck’s going on?’” said Jacobs. “I happened to look, and went ‘oh my god,’ and I just dropped. My barn. We worked so hard.”

The barn was on fire, and by the time Jacobs arrived, it was clear there was little hope of saving it.

Kahnawake Fire Brigade lieutenant Wihse Stacey lives near the barn and could see the fire from his residence.

“I was sitting down with my daughter at the time, and she came out and helped coral the horses,” said Stacey.

The horses remained in the field, and were uninjured, but Homer was unable to save the two bunnies in the barn, though he burnt his hand badly trying to do so.

According to a Peacekeeper report, a call came into the station at 6:01 p.m. about the barn on fire. Officer Donovan Fleischer responded and saw a thick cloud of smoke and flames rising out of the roof when he arrived.

Kahnawake Fire Brigade officers were on scene, but the building was fully engulfed. Homer and a friend were on scene taking tools and propane tanks away from the blaze as PKs blocked the roads.

The blaze caught quickly and grew, as the barn included about 30 to 40 bales of hay inside.

Stacey said even if fire fighters were on scene immediately, a structure with that much fuel (hay) inside would have been very difficult to save once it started.

“The structure itself was all wood, it was full of hay, we probably could have been next door and we would have had a hard time with it,” he said.

There is no definite answer to what caused the blaze, and the fire remains under investigation, but the KFB’s best guess involves the heating source of the building.

“It’s only a speculation, but we do believe it was the wood stove,” said Stacey.

The couple’s CNC ranch, owned by Watio Lazare, houses injured or abused animals – such as the three horses – which workers rehabilitate.

A gofundme campaign, CNC ranch rebuild, is currently running for those who want to help the couple rebuild. Organizers of the campaign are hoping to raise $9,000 to rebuild the barn.

It’s the second tragedy at the ranch in the last six months, as Jacobs had to put a horse named Jack down in the summer.

“Jack made his presence felt,” said Jacobs showing a photo, which seems to show the outline of a horse in the flames.

For those with similar structures that house large amounts of potential fire fuel, the KFB recommends compartmentalizing material and keeping everything dry.

“If you’re going to store hay, it’s got to be dry and it’s best to put it in some form of enclosure. It will definitely slow it down,” said Stacey.

For Jacobs, the loss of the barn cuts deep, and picking up the charred pieces of the structure will be an emotional process.

“It was always my dream to have this barn because my brother used to have it before and he never let me inside,” she said. “I was devastated… I’m an animal lover.”