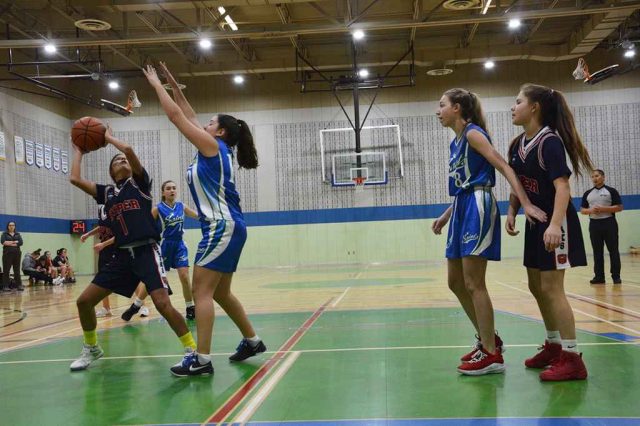 Kuper Academy’s Midget girls basketball team’s bench keeps getting shorter. Wednesday evening at Sacred Heart School of Montreal, the girls entered their first GMAA game of the new year missing key players, including Kahnawa’kehró:non hoopsters Olivia Rice and Bonnie Zachary, who were both out with concussions.

Making a tough situation worse, guard Jillian Diabo was forced to leave the game with lower back spasms in the fourth quarter, as the Sacred Heart Saints were pulling away with the lead.

Coach Kim Day said she is also missing a girl with a lung issue, one on academic probation, and two that were playing hockey Wednesday.

The team is also very young.

“We’re six short,” said Day. “Most of my bench here is Grade 7 (Bantam age), with the exception of a few, playing in a Midget division, so we’re young. That’s where it falls. A lot of our older girls are out injured.”

The Kodiaks’ roster is the result of numbers in the school’s basketball program that also has a quality Juvenile team that played last night.

“Just because of the way our girls benched out this year is that most of the better Midget girls got moved up to Juvenile, and we took the Bantam girls and the rest of the Midget,” said Day.

Regardless, the score was tied at half Wednesday, and Diabo feels Kuper could have done better.

“It was very up and down because we were winning at one point, but then we fell short and stopped working as hard as we could,” she said. “We just let them walk right in and take lucky shots and they went in.”

Diabo was forced to sit on the sideline for the fourth quarter while her mother Shelley Jacobs helped to stretch her back.

Kuper’s coach remains impressed with how her young team has been able to handle adversity and battle through lopsided odds.

The Midget Kodiak hoopsters play Herzliah High School Wednesday at home, and look to rebound with a win.