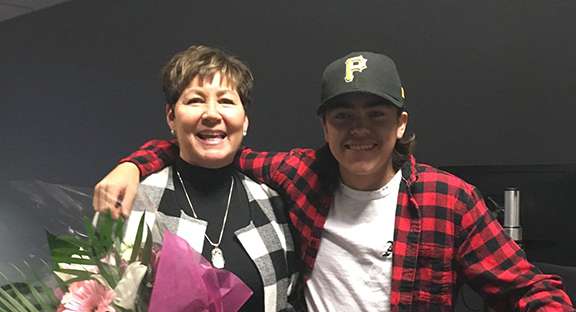 It took over a half-decade of hard work, but the dedication and determination paid off as Morgan Phillips can now affix PhD to the end of her name. (courtesy Morgan Phillips)

It’s taken seven years and right up until the last moment Morgan Phillips put everything she had into completing her doctorate. Now she can say she is a Doctor of Philosophy.

“I started in 2011, and I just finally submitted it Monday,” said Phillips.

“It’s a PhD in Philosophy in the Department of Integrated Studies in Education at McGill, and I did my dissertation on Indigenous health curriculum,” she said.

She finished a successful defense of her dissertation, which is called “A participatory approach to developing a culture based health promotion model for elementary students in Kahnawake,” on November 27 at McGill University in Montreal.

Her work is based on a health curriculum project on diabetes prevention, which was piloted at Kateri and Karonhianónhnha schools from 1994-97. There were 10 lessons a year for students from grades one to six in both schools, but they were delivered in different ways.

After the program ended, an evaluation was done a few years later, which Phillips was part of. The Kahnawake Schools Diabetes Prevention Project (KSDPP) and McGill University did the study. She used the results and recommendations to build her case study. Her thesis is based on health promotion in schools, but in a cultural and comprehensive context.

“It’s not only about diabetes prevention anymore, it’s broader. For example, fire and safety have to go into all the schools, the hospital nutritionist goes in to the schools, the dietician, and the dental hygienist all go in,” said Phillips.

“They’re all vying for the students’ time and it’s not a coordinated approach. So what I’m proposing to the education system is something that is not just about prevention of diabetes but something that is culture-based and covers all health topics.”

She used an Indigenous research framework for her thesis, which she said is participatory and consensus-based. She pointed to talking circles as an example and calls this approach “research sovereignty,” as opposed to traditional western research methodology.

She finished her thesis and had to defend it in front of a review committee and an audience.

“You have to make a 20-minute presentation and they begin a series of questions from five people and it goes three rounds. Each person will ask a question and I have to answer it to their satisfaction and then it continues to round two and three.”

Although it was intimidating she said it was like a conversation and the committee didn’t want her to fail. After, she and the audience in the room were asked to leave the room while they made their final judgment.

“When they called everybody back in they said ‘congratulations Dr. Phillips’… I’m still so emotional, it’s been so much work,” she said.

But there was still more work to be done because she had to make revisions and submit what is called an e-thesis. Phillips said it was a big process that took her a week to figure out just how to convert her document into the particular format, which she was asked to do.

“Yesterday (December 17) was the absolute deadline and if you push that button and if it’s not all done, you have to wait until April.”

Phillips had actually sent the finished work to her supervisor on Saturday, two days before her deadline, but by Monday he hadn’t received it yet. She was worried because her supervisor also had to do work on it before it was finalized.

“I was in a panic because they didn’t get it and I called the office at McGill and no answer, but I guess there was also other people submitting on the 15th because it’s a big university.”

Phillips had a brief meltdown but finally got a hold of someone in the office around 1 p.m. Her paper was due by 5 p.m. She was told there was a glitch in the system, but the system administrators were able to override it and get the work to her supervisor in time.

She’s happy to have finished after so much work and effort being put into it. She said one of the most rewarding parts of her work was a photo-voice project that she did with some grade 5 and 6 students as a part of her research, to find out what they understood about health and diabetes prevention: “for me it was hearing the voice of the youth.”

Now that she is done, Phillips isn’t sure if it will be used within the education system here but said she hasn’t taken it to the education center.

“I know that in the past few years they’ve been working on a strategic plan and that the health curriculum isn’t really in there yet, so maybe they’ll take a look at it.”

Phillips is going to take a little break now but will keep busy with her many other boards and projects she’s part of.