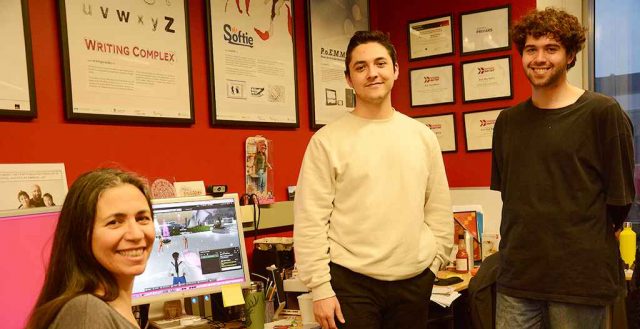 While holiday cheer was in the room at the AbTeC office, cultural exchange and winter fun was online on an island where Indigenous presence is explored. (Daniel J. Rowe The Eastern Door)

Before the holidays, The Eastern Door took the elevator to the 11th floor of Concordia University’s EV building and entered a duel reality.

In the Aboriginal Territories in Cyberspace (AbTeC) offices December 13, students and guests were sipping winter drinks and chatting, not unlike many a gathering over the holidays.

However, there was another winter party happening.

“For the first time we’re having a party that’s a mixed reality event, which we have AbTeC island set up (online) with snow and decorations for the holiday, and here, in the studio, we have hot chocolate and cookies and guests; real people,” said AbTeC co-founder Skawennati Fragnito.

AbTeC is a network of academics, artist and technologists, “whose goal is to define and share conceptual and practical tools that will allow us to create new, Indigenous-determined territories within the web pages, online games and virtual environments that we call cyberspace,” she said.

The Winter Solstice Wonderland party brought the real and virtual world together.

“It reminds me of the movie Hackers,” said Dion Smith-Dokkie from the West Moberly First Nations in Treaty 8 territory. “Where they’re at the club with the computers.”

Skawennati and her team created the online 3D virtual world AbTeC island in 2016.

“Aboriginal Territories in Cyberspace operates its own sovereign territory and land within that program. We like to call it an Aboriginally-determined territory in cyberspace.”

The AbTeC office opened in 2006 with the online space on Second Life launching about a year later.

The program has gained a good deal of positive attention, as Fragnito, Longboat and others travel and present on their work.

“A number of people have gone on a number of different trips to give workshops at different conferences and such,” said Smith-Dokkie.

The online space provides a unique opportunity to exercise sovereignty for the Onkwehón:we students at AbTeC in a unique and modern context.

“We can dictate what happens on this land, what kind of objects exist, who can come here,” said Longboat. “It’s essentially a space for Native people in a non-Native broader context.”

Walking, running or flying around AbTeC island using an avatar, you can peruse an interesting and varied collection of Onkwehón:we art, historic settings such as a longhouse, a space ship and other objects.

In addition, you can chat with other avatars, who are on the island. Anyone with a Second Life account can visit the island and be shown around by a member of AbTec.

The response to the program has been predictably positive.

“It provides so much opportunity for self-expression in a way that’s digital, and almost anything is possible,” said Longboat.

“I see a lot of appreciation for the objects we have in it, but then we’ve been having some very cool conversations with outsiders, who have come virtually and engaged some ideas about what it means to have digital versions of Indigenous cultural belongings or Indigenous identity in cyberspace.”

Fragnito explained that the workshops at Concordia teach students to make the sets for the machinimas, make cyber objects and their own machinimas, and to keep the relationship going. Once someone has an account, they can log on and visit AbTeC island at any time.

“This space is a space we use both to meet people, but also to teach the youth how to create a digital space,” said Fragnito.