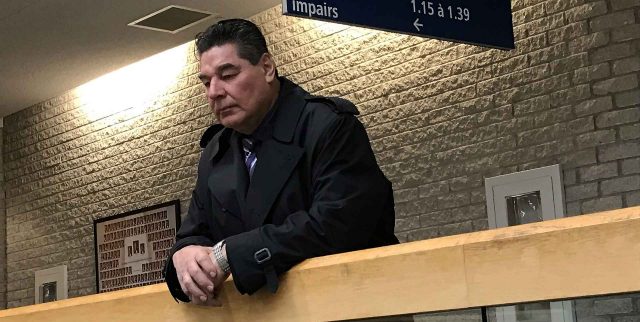 In the end, the cost of a trial was too much for former First Nations Winery owner Floyd Lahache, who left the courtroom Tuesday disappointed the Mohawk Council did not stand behind the permit they granted him. (Daniel J. Rowe, The Eastern Door)

What started as a front-page, dramatic arrest of a dozen people from Kahnawake, Quebec and Ontario, political statements, high-profile legal arguments and packed courtrooms, ended in the former First Nations Winery owner pleading guilty alongside his partner with few spectators.

Three-and-a-half years after his arrest May 12, 2015, Floyd Lahache pleaded guilty to fraud over $5,000, along with his partner Luca Gaspari last Tuesday, December 11. Both men were picked up in addition to 10 others in relation to the Surete du Quebec’s Project Malbec operation, targeting a liquor-smuggling network with the First Nations Winery at its centre.

The two men pleaded guilty to organizing and implementing a procurement scheme with a Quebec Company that had an SAQ license, and distributing wine to a company not operating under a valid Quebec license, despite being warned by the Regie des alcools des courses et des jeux that is was not permitted, according to the statement of facts presented in court.

Justice Stephane Godri agreed with crown prosecutors Karine Cordeau and Juliene Gaudet-Lachapelle’s joint submission with defence attorney Roberto De Minico, and sentenced Lahache to 60 days in prison, to be served on weekends, minus the 15 days he had already served in 2015.

In addition, Lahache received 22 months of house arrest, and will have to reimburse Quebec $35,000 and perform 240 hours community service in Kahnawake.

Lahache had told The Eastern Door at the last two court hearings that he was tapped out and simply could not continue to a full trial potentially lasting weeks.

He added disappointment with the local body who granted him an Alcohol Beverages Control (ABC) Board permit.

“I’m relieved it’s over, but I’m disappointed in the outcome,” said Lahache. “I thought I would have had more input from the council, as did everybody that I talked to about my case around the community, who were disappointed that the council wasn’t involved in my case because they were the ones who gave me the permit.”

Mohawk Council of Kahnawake grand chief Joe Norton testified in an earlier court date in October 2015 on behalf of Lahache, and said in an October 23, 2015 news release that he would fight Quebec over Kahnawake’s right to manufacture and sell alcohol based on the 10 Agreements of 1999.

“We are willing to fight this all the way to the Supreme Court if necessary. It’s our jurisdiction – plain and simple,” said Norton in the release.

“The MCK maintains that we have jurisdiction over the manufacturing and sale of alcoholic beverages within the territory of Kahnawake,” Norton said in a statement to The Eastern Door.

“Not only do we have an Alcoholic Beverages Control Law regulating the alcohol industry but we have an agreement with Quebec in this regard. The MCK will continue to defend our law when our jurisdiction is threatened. In the present case, the decision did not come down to a jurisdictional issue but was a criminal file where the individual needed to decide their best course of action in the circumstances.”

No council members appeared in court with Lahache since 2015, and Lahache is concerned that other establishments with permits may have issues with Revenue Quebec in the future.

“Now, for them giving permits out, it leaves everybody vulnerable,” said Lahache. “What’s the forecast to come after this verdict? It doesn’t look good for the town.”

Lahache remains insistent that he did no wrong. He sold wine on the territory, and feels he should not be held accountable for what others did with his product when they left Kahnawake. He pled guilty, he said, because his finances could not hold any longer.

“I had no more money,” said Lahache. “I was exhausted. I had no help from nobody. I had to do it all myself, and I used up all my money.

“What I think I’m going to do now is go collect welfare. They can check all my records. I’ve got no money.”

Lahache and Gaspari’s lawyer was not happy his clients were forced to plead out in the case, but understood their situations.

“Finally, this is over,” said De Minico. “I believe Mr. Lahache and Mr. Gaspari were very tired and no longer had the energy or the means to be able to continue this judicial saga, and, as a result, they decided, once they were given their options, to enter a plea of guilty, and to put this thing to an end.”

Gaspari received a suspended sentence of 24 months imprisonment, and must reimburse $30,000 and perform 180 hours community service.

Two of the original 12 arrested, Diamond Estates Winery owner Murray Marshall and Paolo Simone, died since being arrested, and Alberto Milan, the owner of a winery in Ontario, and Kahnawa’kehró:non Robert Whitebean, have yet to plead or go to trial.

Five others pled guilty, while charges against Liette Labbe were stayed.

Whitebean was in court Friday, and is intent on going to trial.

De Minico said the experience with Lahache taught him volumes about Onkwehón:we business and culture in Kahnawake.

“It was very interesting and a pleasure to have known Mr. Lahache, who is a fine gentleman notwithstanding the result today. I’m definitely less ignorant because of it, and I’ve learned a lot,” said De Minico.

For the crown, Gaudet-Lachapelle said his side was satisfied with how the case concluded.

“There were a lot of elements in this case, and this was dealt with competence by both parties I feel,” he said. “We were ready to proceed in this case. There was evidence that was relevant that led to this settlement.”

For Lahache, he fears the case against him will set a precedent for other businesspeople in the community.

“Now what’s to stop them from going after everybody else?” he said. “They used me as a precedent. They got their verdict, and now they can go after everyone just like they did to me.”