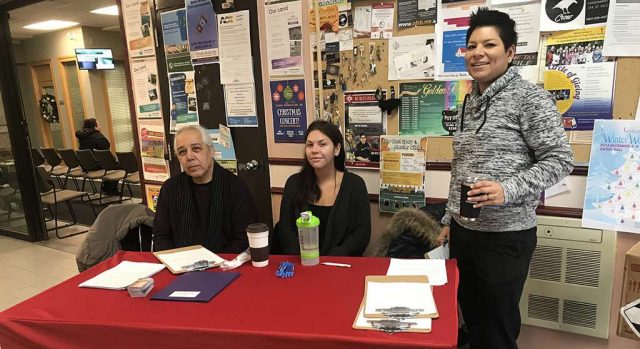 Mohawk Council chiefs and staff are in the midst of an information blitz sharing their thoughts on Canada’s Bill S-3. There’s a meeting tonight for those interested in finding out more. (Daniel J. Rowe, The Eastern Door)

The Mohawk Council of Kahnawake is in the midst of an information blitz regarding the Canadian government’s Bill S-3, which was one of the topics on the agenda at the Iroquois Caucus meeting Sunday in Ottawa.

Council grand chief Joe Norton attended the caucus along with council chief Kahsennenhawe Sky-Deer, who was at the Services Complex this week with other council chiefs and staff handing out information, and asking community members their thoughts on potential impacts the amendment to the Indian Act (Bill S-3) may have in Kahnawake.

“Our goal right now is for the community to be aware of what’s coming,” said Sky-Deer.

Community members stopped by the booth this week to fill out surveys about how they would like to be informed about S-3, and were welcome to take information packages that included prior MCK news releases, a letter from the MCK to the minister of Crown-Indigenous Relations and Northern Affairs Canada, background on the Indian Act, a PowerPoint presentation on S-3 and other documents deriding the bill.

Bill S-3 (An Act to amend the Indian Act, in response to the Superior Court of Quebec decision in Descheneaux c. Canada) gives any descendant of a woman who lost her status because she married a non-Indigenous man at any time between 1876 (when the Indian Act came into force) and 1985 the right to apply for federal status as long as that descendant was born before April 17, 1985, according to section 2 of the law. The complete bill can be found online.

The federal government announced it would engage in a collaborative process with communities in relation to S-3 in September.

The MCK rejected this process November 13.

“We’ve always taken the position that membership and citizenship has always been the right of the First Nation to determine, and that Canada needs to get out of these affairs,” said Sky-Deer.

“With Canada doing the collaborative process, and consulting with the communities, we said ‘no, we’ll do it ourselves.’”

A council news release in November said the law would add between 35,000 and 65,000 to the federal list for Kahnawake.

The Eastern Door contacted the ministry of Crown-Indigenous Relations to explain the numbers, but they did not respond by press time.

The MCK engagement on S-3 will continue until around January, including the special community meeting scheduled for tonight.

“We want to incorporate that within Canada’s report of what they’re going to develop when they come back from all the First Nations,” she said.

“We just didn’t think it was appropriate to have INAC officials coming to the community and consulting with the people from their perspective.”

Sky-Deer said council is open to engaging community members on their questions and concerns in any way they desire, be it community meetings, private conversations, online forms or at the kiosks.

As the Iroquois Caucus looks for a new coordinator to tighten up terms of reference and how to use the body caucus more effectively, Sky-Deer said the meeting Sunday was one of the most productive she’s attended.

“There were a lot of topics covered about us needing to really use this forum to push more national issues; we’ll call it Haudenosaunee issues,” said Sky-Deer.

Canada’s proposed implementation of the rights and recognition framework, for example, has been a topic on the Assembly of First Nations’ (AFN) radar this week, and the caucus wants to be ready to make statements moving forward at gatherings like the AFN AGA this week.

In addition to Norton, council grand chiefs from Akwesasne, Tyendinaga, Kanesatake, Six Nations, and Oneida of the Thames were all in attendance for Sunday’s caucus.

“It was one of the best caucuses I’ve seen in terms of participation,” said Sky-Deer. “There must have been about 25 chiefs there, and an array of topics.”

At a prior meeting, the caucus members decided they would meet six times per year with four being in Ottawa to position the caucus closer to the political arenas such as the AFN and Capital Hill. The other two meetings would be at individual communities.

As far as topics go, Sky-Deer said most communities are on a similar track when it comes to languages, cannabis and S-3.

“We’re pretty much on the same page,” she said. “I’m actually really excited about the direction the caucus is going to be going in the next little while and tightening up those mechanisms of how we operate, and seeing that reinvigorated commitment of how many people were there and the topics that were discussed.”

Reaching out to traditional bodies in communities remains a huge task all communities know needs to happen, with many topics moving forward.

“I’m all about coming up with some type of a model to return to traditional government or a traditional form of government, but can we at least have a conversation about how we get there? Or come up with a plan?”