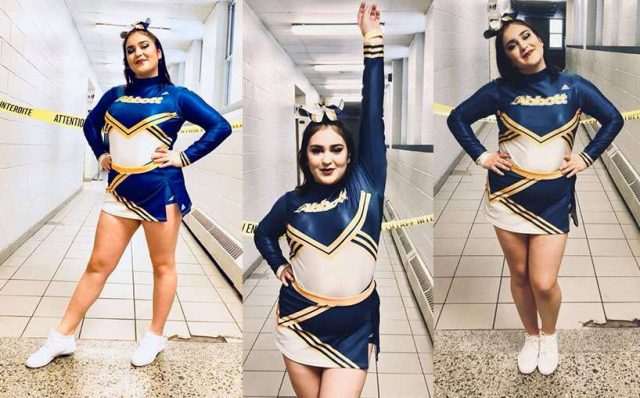 Continuing from minor or high school sports to the college or university level is no small feat. It takes commitment, dedication and a huge stride out of your comfort zone.

Kawennihtha Coral Kirby took a brave step into the unknown in her first year at John Abbott College after she saw a posting for Islander cheerleader tryouts. The Kahnawake Survival School wrestler had always wanted to be a cheerleader, but Survival does not have a team. When she saw the posting, she thought, why not?

“After my first tryout, I realized that this was the sport where I belonged,” said Kirby.

Cheerleading, however, is no joke and requires serious athletic ability, not to mention flexibility.

“I was nervous to make the team because I couldn’t do a back flip or even a front flip,” said Kirby. “As well, my splits were still a foot from the ground, so I took the challenge.”

Kirby taught herself to do the splits in three days, impressed coach Bianca Szczepko-Lavoie, and made the team.

“Honestly, I have no words to describe her,” said Szczepko-Lavoie. “Coral is such an exceptional athlete. No matter how hard it gets, no matter if she’s having a bad day, she always gives her all.”

The rookie base (Kirby’s position in the squad) picked up the demanding sport quickly, according to the coach.

“I was shocked at how fast she learned,” said Szczepko-Lavoie. “For someone who has never done cheerleading before, she’s doing amazing. She never ceases to amaze me.”

“It was truly amazing to experience what it was to be a competitive cheerleader,” said Kirby. “Competition day for a cheerleader is extremely different than any other sport I’ve competed in.”

Szczepko-Lavoie said the goal of the tournament was to get the cheerleaders used to high-stress competition in preparation for future competitions. Future practices, she said, will include focus on technique and execution.

Kirby spoke about entering her first competition, and how, in cheerleading, everyone on the team must look as similar as possible. Sunday morning, Kirby said, was all about making sure your makeup, hair, bow, and uniform look absolutely perfect. Looking fabulous, however, will never win the day in the end.

“Competitive cheerleading is not just about smiling and looking pretty. You also have to be strong physically and mentally,” said Kirby. “Imagine lifting a person over your head and making sure you smile to the judges without letting them see you struggle. It’s important that no matter how bad you mess up, you continue with that smile on your face.”

Points are awarded for facial expressions, the routine, rhythm, and being organized as a team.

“Cheerleading is about perfection and having fun,” she said.

Szczepko-Lavoie feels Kirby has the potential to get very close to that goal of perfection.

“Coral has so many positive qualities. It will get her far in life,” the coach said. “I’m exceptionally proud of her and to be her coach means a lot. She is an unbelievable athlete.”

Kirby said wrestling at KSS helped her build athleticism and strength, but also sportsmanship and how to function as a team. The skills on the mat have already helped in the first months of her cheerleading life.

“It’s a very tough sport,” said Kirby. “It tests a lot of your limits, but, in the end, it’s all worth it. Cheerleading is about exploring all the wonderful things you don’t know your body can do.”