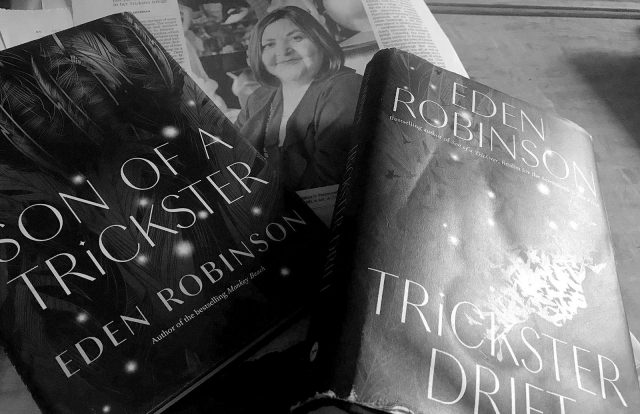 Some sequels you just can’t wait to come out, and the build up to their release can either let you down, fulfil the craving or be more fun than you expected.

I ended my March, 2017 review of Eden Robinson’s Son of a Trickster (vol. 26 no. 11) impatient that I would have to wait for the next instalment.

The exact quote was: “The only downside to the book is knowing that there are two more coming, and that we’re all just going to have to hurry up and WAIT for them to come out. Stupid patience.”

The second instalment of the trilogy transports Jared, the son of Wee’git, from Kitimat to Vancouver’s Commercial Drive, as he struggles with sobriety, university and a stalker named David while serving up meals, and navigating the west coast landscape both in the real and magical realm.

“I feel it building up like a TV series, working out the kinks that made season one awkward and hitting its stride in season two,” said fellow Robinson fan Gage K. Diabo.

“It helps that the series is less about plot than about seeing the characters deal with little bits of the supernatural in their everyday lives. More than anything else, I just love being with these characters as they butt heads and occasionally stumble into weird magical things, seemingly out of nowhere.”

Though the book stands up well enough on its own, reading the first part is kind of essential. It’s helpful to know the characters and background information to understand several plot points in addition to being introduced to the folklore, magic, and mystery of the area.

Robinson is strong as a writer in several regards. Her characters are well developed, complicated and engaging, as Diabo said. The blend of melancholy and magic is brilliant and tinged with solid humour, and the setting is so vibrant you can feel the environment with every page.

As someone who lived in the Commercial Drive area at one time, the Trickster Drift is able to take me back to my former home in vivid detail, while also guide me through a fascinating spirit world unique to the characters in the novel.

Diabo went the other way and now lives in Vancouver, and began PhD studies at the University of British Columbia in September. He picked up on another aspect of her work that’s a joy.

“I notice more and more how her west coast (Haisla/Heiltsuk) potlatch culture shines in how she uses food to make the reader feel at home with the characters,” said Diabo.

“In Monkey Beach (Robinson’s second book), she gets your mouth watering by talking about fired fish and Spam. In the Trickster books, the protagonist (Jared) loves to cook as a way of clearing his mind, and the meals he cooks sound so tasty.

“I take it as Eden Robinson’s way of welcoming you into her world given how dark and violent her books can be otherwise.”

The novelist has spoken about her recent health struggles and dark times following her father’s death, and, while reading her work, the emotion and humanity is hard to miss.

Her work is a joy to read, as, though dark and moody at times, there is a sense of humour threaded through the pages at all times.

No matter how intense things get plot wise, the sound of Robinson’s infectious laugh is always somewhere in the background, like the ghosts and trickster children climbing the walls, and inhabiting the floorboards of the rooms in her worlds.