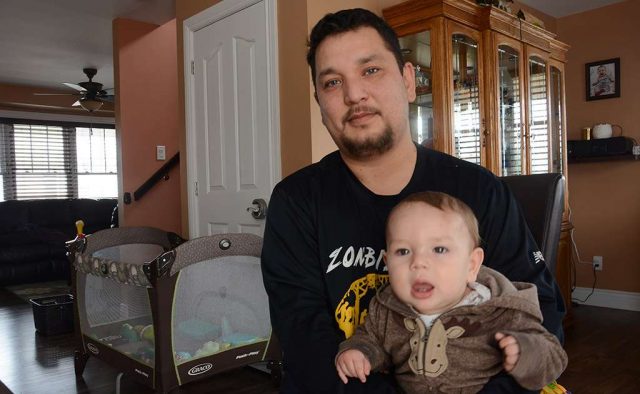 Landon Montour (with younger son Iehahonwé:iohs) accepts the charges and sentences handed down last week as the former PK works to rebuild his life and reputation. (Daniel J. Rowe, The Eastern Door)

Former Peacekeeper Landon Montour, 35, said he takes responsibility of the two charges against him that cost him his job as a police officer and a six-month house arrest sentence.

Montour was sentenced to six months house arrest, 100 hours community service to be served within the year, and one-year probation after he pled guilty to falsifying a police report in early 2017 and obstruction of justice charges.

Montour was suspended from the force February 15, 2017, and terminated two weeks later along with fellow officer Cody Diabo.

The Surete du Quebec conducted the criminal investigation, and charged Montour, who pled guilty to both charges. The charges against Diabo were dropped.

“As we were police officers on duty at the time, we were charged at the highest level – indictable charges,” said Montour. “You’re in a position of trust and, at that time, that’s the way the court saw fit to charge. I have no issues there. Totally expected.”

The father of two boys with partner Falen Jacobs has conditions on his house arrest, allowing him to take his three-year-old to school, travel to work and buy groceries and other errands.

PK chief Dwayne Zacharie said the unfortunate incident is an example to other officers, who for the most part do an excellent job following the rules.

“We have a code of ethics and you hope your employees follow them, and for the most part they do,” said Zacharie. “The employees we have here are excellent. People have to know that if you do it, you’re going to be found out.”

Neither Zacharie nor Montour could speak about the details of the incident that led to Montour’s termination and the criminal charges, as the two parties entered mediation in a civil case and came to an out-of-court settlement with non-disclosure conditions.

Zacharie said an officer being dismissed or charged with a crime can create complications, including potential compromised cases the officer was involved with.

“Absolutely, it can be,” said Zacharie. “It depends on what kind of file it is… If it’s their file and they’re the officer in charge of the file and they’re the only ones giving testimony, there is an impact, but the crown will look at it and see what happens… If it’s a big file, and it has something to do with the officer’s credibility, there could be a huge impact on something like this.”

In addition, the understaffed department lost seven senior officers to retirement in the past four years, and losing two in connection with the case puts more strain on the force.

“It’s absolutely frustrating,” said Zacharie. “It’s really disappointing. We invest so much time and effort and resources in developing an officer, and something like this really does impact us.”

Zacharie said the six newly hired officers are working out well, but that numbers remain low, and new recruits take time to develop.

“It takes a long time to develop an officer, especially a standalone officer,” said Zacharie.

The community can expect nine new officers in the coming year.

The PK chief is hoping the charges against Montour will serve as an example to those on the force.

“It’s an example of what can happen to you,” he said. “Do your job diligently and you won’t run into this problem. It’s a big deal because it’s a police officer, and they’re held to a higher standard and they have so much authority and the courts frown on this.”

Montour said the past 21 months have been tough, particularly living in Kahnawake.

“For me, it’s a little bit more focus. That fishbowl’s a little bit smaller because I was a police officer, any other person that gets charged with impaired or whatever and gets community sentencing, doesn’t get to the papers, generally.”

He remains remorseful, particularly because he considered himself a good cop that had the right reasons for entering the force.

“I do feel remorse for it, a sense of embarrassment, because it goes against what I stand for,” he said. “The reason I became a police officer is because I wanted to ensure the community I had growing up was available to my children and future generations, somewhere safe.

“My son can go play on the other side of the community and I know he’s in good hands because somebody’s watching him. That’s the reason I became a police officer. That’s part of my core values, and for this to tarnish it and give it a black eye, and for me not to be able to defend it, it really does hurt.”