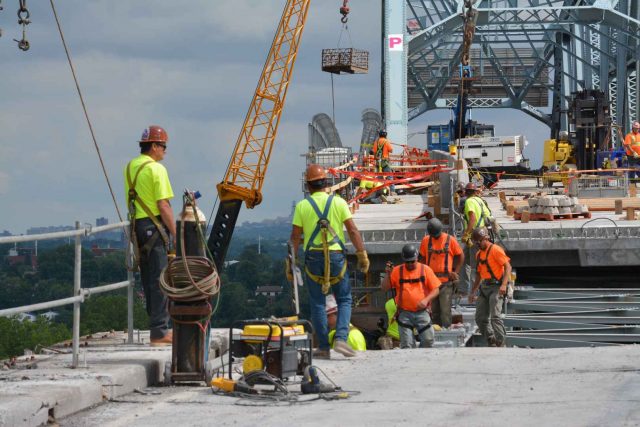 Ironworker Chris Brown believes that the I-9 (Employment Eligibility Verification) form he was told he must fill out to work in the United States is inconsistent with the 1795 Jay Treaty. (Daniel J. Rowe, The Eastern Door)

Chris Brown has been slinging steel as an ironworker in New York for almost three decades out of Local 580 in Manhattan.

Brown was recently sent to a one-day, eight-hour job at Champion Metal and Glass, which he completed, then took two weeks off.

When he returned to New Jersey, he called the union hall asking where his pay for the work was.

“Then I reached out to the foreman I was working for and he told me that I had filled out the immigration paper wrong,” said Brown.

The issue for Brown was the Employment Eligibility Verification form I-9 issued by the Department of Homeland Security and US Citizenship and Immigration Services.

The form requires workers to check whether they are 1) a citizen of the U.S.; 2) a noncitizen national; 3) a lawful permanent resident or 4) an alien authorized to work until a certain day.

“He’s got to fall under one of those categories. I thought it was category number four,” said Willdelaforcade. “If you read the definition, it basically says that he’s not a US citizen, but he’s legal to work in the US, which would fall under the treaty… Check it, sign it, I will pay you.”

Brown wrote “Mohawk Indian” on the form and did not sign the form at the bottom.

“I told her about the Jay Treaty and the Paul K. Diabo case, and she really didn’t care because she pulled up documentation that was on her computer that the US Customs puts out there and deems that what they have is the proper documentation to go and work in the United States,” said Brown.

The bottom of the I-9 form lists, among others, “Native American tribal document” as a valid document to establish identity, which, along with a social security number, authorizes work.

Willdelaforcade said the forms are never word-for-word perfect for each situation, but insists the fourth option does not conflict with treaty rights.

“It’s not exact, but nothing ever is,” said Willdelaforcade. “If you’ve ever read any of these forms, or gotten into the legality of all these forms, it never is exact wording or they twist the words or they make it kind of okay.”

Brown contacted members of the Mohawk Council of Kahnawake and Mohawk Nation at Kahnawake in addition to his union’s business agent with his concerns.

Council chief Tonya Perron said the form in question does not seem consistent with the 1795 Jay Treaty that allows Onkwehón:we people to freely cross the border in either direction to work.

“It’s problematic because there’s nothing there for, ‘North American Indian,’ let’s say,” said Perron. “Based on the Jay Treaty, he’s totally right. You can cross the border, you have a right to work there. The problem is, is that having Jay Treaty status, if we can call it that, doesn’t automatically meet the requirements of the form, so there’s some inconsistency here. The form and the Jay Treaty rights are not consistent with one another.”

“Of course he’s not the only one. There are others,” said Deer. “Because of the Paul K. Diabo case, that’s not supposed to happen. Our people, men or women, don’t need a green card to work in the States, and they’ve been doing that for decades.”

Deer said there has been pressure recently put on Onkwehón:we people working in the States to get a green card, which would go against the precedent set by ironworker Paul K. Diabo in 1927 when he fought the US government in court for the right to work in the States without a green card.

“That would be a violation of what has been happening for the last couple of years,” said Deer.

Perron hopes a letter from Kahnawake’s membership department attesting to Brown’s status and blood quantum will at least get the employer to release Brown’s pay.

She added a concern that companies in the States may also use the E-Verify system, which would, like the I-9 form, be inconsistent with treaty rights.

“The minute that you put this information into it, if it doesn’t have one of those boxes checked off, it flags you as an illegal person working illegally in the US,” said Perron.

“We’re trying to find a solution not only for Chris, but for any of these future employees or other ironworkers from here that may encounter this problem in the future.”

Brown came across the I-9 form once before, and he filled out his social security number and wrote “Mohawk Indian.”

“This is the second time I’ve come across an incident that’s challenging our ability to work in the United States without filling out any immigration papers or green cards,” said Brown, who is concerned more workers will come across the same problem when trying to get pay.

“They’re asking me, ‘who am I?’” said Brown. “The assimilation that they’re trying to do to people because of whatever reason they’re having doesn’t even apply to us, no matter what. Whatever their reason is, it doesn’t apply to us.”

Willdelaforcade is not asking for a green card, and restated that the term “authorized alien” simply meant that those checking the box are not US citizens, but are legally allowed to work in the USA under an agreement (such as the Jay Treaty).

“It’s just telling me and, if I ever get audited, the agents that come in to audit me, that he is working (legally),” she said. “Is there a clear cut treaty definition on the I-9? No, but ‘4’ I believe covers his situation.”

Without a properly filled out form, Willdelaforcade said she could be fined up to $1,000 per person at the company.

“I have to protect my company, and I have done everything that I can possibly do to get this guy paid,” she said.

Brown is looking for an attorney and will put a lien on the company’s assets if necessary to get his pay, but that the issue is about more than just a paycheque.

“He (Paul K. Diabo) fought his case due to the fact that we have treaty rights,” said Brown. “For me to take that $255 and sign that paper would be a slap in the face to that gentleman for what he put in place for other Mohawks. Especially for the next generation that’s going to come up behind me.”

Willdelaforcade is ready to pay Brown for his work, but needs the paperwork completed.

“I’ve got his cheque cut. I’ve got the envelope ready to send to the union,” said Willdelaforcade. “We do need the proper paperwork, filled out the way it is supposed to be filled out in order to pay him.”

“I’ve got his cheque cut. I’ve got the envelope ready to send to the union,” said Willdelaforcade. “We do need the proper paperwork, filled out the way it is supposed to be filled out in order to pay him.”