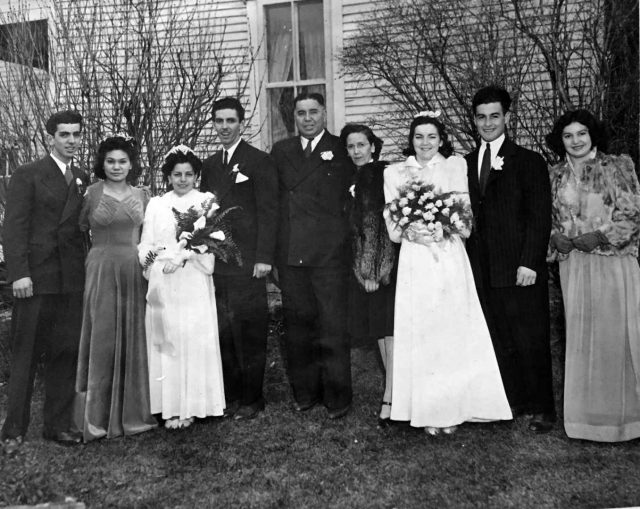 “You know, if we don’t get these names written down, they are going to get lost,” said Christine Stacey.

Sitting by her white kitchen island, she looked fondly down at the black-and-white photos of her family –  reciting the names of the people she knew and the stories she remembers from her youth.

The majority of her photographs were destroyed in a flood in her basement, with the exception of a couple of photo albums she now holds onto dearly.

This Blast from the Past photo features a very special day for the Jocks family.

Taken November 22, 1940, the family was not only celebrating the double wedding of Stacey’s parents, Pauline Jocks and Pat Stacey and Pauline’s brother, Johnny Jocks and his wife Duckie, but the 25th wedding anniversary of the heads of the family, John “Big Six” Jocks and Jeanne Nadeau.

Nicknamed “Big Six” because of his over six-foot tall towering stature, he was well-known around Kahnawake as a master lacrosse player, but also worked as the town’s RCMP officer.

“He didn’t have a car back then and he used to ride a bicycle,” said Stacey.

She remembered a story from the time when her uncle Johnny and Donald pranked their father by tying up a wire around the wheels of his bicycle just before he went to a police call.

“My uncle Johnny was a character,” chuckled Stacey.

The Jocks siblings were very close and the brothers practically looked like twins. During the war, they enlisted in the navy and were stationed in a house in Halifax.

“I don’t think they were ever at battle or at sea,” said Stacey. “It was just a job – it wasn’t like guns and having to fight.”

The duo eventually returned home and settled down with two local girls.

Johnny and his wife Duckie used to live right next door to Stacey. Growing up she was grateful for that because her godparents were always there to help her.

“When I had to learn how to cook and I’d start to make something, I was a nervous wreck,” said Stacey.

Her father Pat was a “perfectionist” and wanted his suppers to be just the way he liked them.

“I would call my aunt Duckie and tell her ‘I’ve done this, this and this, now what do I do?’ I would give her the steps I did and she would always give me the rest and that’s how I learned how to cook,” said Stacey.

At her wedding, Duckie’s best friend Olive Day was photographed along with the family. Day was originally from Akwesasne but then moved across from Jersey’s Chipstand on River Road with her husband and four children.

“She had a gorgeous son. He had a motorcycle and he would let people take turns riding it,” remembered Stacey.

Stacey’s mother Pauline got married at 24 years old, had four children and lived in Kahnawake her whole life, while Pat ended up moving to Buffalo.

“My mother had a phobia about travelling, so she always stayed home,” explained Stacey. Despite her phobia, she was still able to work at the old Kateri Memorial Hospital doing secretary work for Dr. Hamel, she said.

At her wedding, her best friend Evelyn Montour Cook attended as well.

About Cook, Stacey said she got severely sick while still in her early 20s.

“She went all the way to California to get open heart surgery,” said Stacey. Cook tragically died during the operation and had left behind four children, who were then taken care of by Cook’s mother-in-law.

Like the rest of the family in the photograph, Big Six and Jeanne look happy, but that wasn’t the full story in reality.

According to Stacey, Big Six had cheated on his wife and spawned five children with the other woman.

“They stayed in the same house but the marriage was over,” she said. “Big Six had one side of the house and my grandmother had another section of the house. She had her bedroom, a kitchen and a store.”