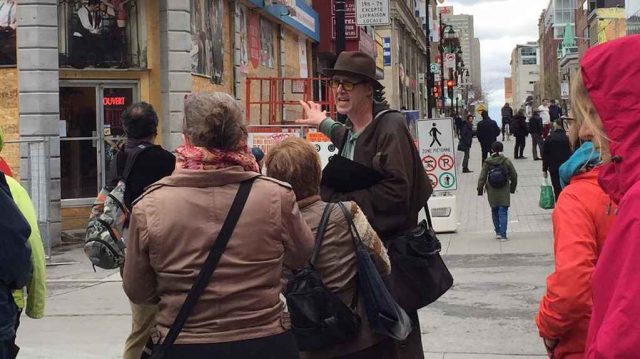 Tour guide and history teacher Donovan King explaining the history of Montreal and Mohawk Territory, as he attempts to breath the modern air of reconciliation into an industry often trapped in the colonial past. (Courtesy Donovan King)

The city of Montreal sits on the banks of the St. Lawrence River, on traditional Kanien’kéhá:ka land, and it celebrated its 375th anniversary last year. It’s a popular destination for tourists around the world who go to visit the city to learn about its culture and history.

The city is known as Tiohtía:ke and Mont Royal, in the centre of the island, is known as Otsirà:ke in Kanien’kéha.

Because of an effort to have the city acknowledge the people whose territory the city was built on, the city’s flag was re-designed last year to include the Kanien’kéhá:ka and other Onkwehón:we nations in the area along with the French, English, Irish and Scottish.

Montreal recently hired a commissioner of Indigenous affairs as a part of the city’s reconciliation process with Indigenous peoples.

Amherst Street, which was named after a notorious and racist British general in the 18th century, is being changed to an Indigenous name to reflect the city’s commitment to reconciliation.

But there’s something that irks a non-Native Montrealer, and he wants to change it.

Donovan King is a history teacher and also works as a tour guide with his own tour guide company, Irish Montreal Excursions.

King has noticed that many other guides often don’t acknowledge the city’s Indigenous roots in their tours and that it’s something that’s either ignored or downplayed. He thinks the tourist industry in Montreal is behind when it comes to addressing reconciliation.

“I was wondering what the name of Mount Royal is in the original Native language (Kanien’kehá:ka) and why this information is not available on the website,” he emailed her.

To which she responded:

“There is no known name used by natives for Mount Royal prior to the contact period.

“In addition, the stories of the discoverers do not mention the name given to the mountain by the natives. The word mountain would be  Onon :ta’  in Iroquoyen,” she wrote.

It’s illegal to run tours in the city without a permit, according to the city’s bylaw G-2, which states that “that any person who hosts or leads a guided tour within the territory of the City must have in their possession their tourist guide’s permit for the current year.”

To become a tour guide, though, people need to become accredited through a course run by Institut de tourisme et d’hôtellerie du Québec (ITHQ). Once the eight-month course is finished the person becomes an accredited tour guide in Montreal. Most tour guides are usually independent operators in the city who are contracted to tour guide companies.

Sebastian Mercier with ITHQ said that the focus of the course is the history of Montreal, “they will surely talk about the First Nations at the beginning of the history but I will tell you that they won’t focus on that. It will be the whole history until now.”

King has taken the course and he said because of his background in history, he is already familiar with the territory and its Indigenous roots. He also said that the history taught in the course through the ITHQ is very basic when it comes to Indigenous content.

“It’s a problem because a lot of the tour guides aren’t even taught this sort of thing in the school and they don’t even know whose territory we’re operating on. ” he said .

“A history teacher with four years of training is not allowed to give a tour but a tour guide training another tour guide with no teaching license is allowed,” said King, speaking about the city’s by-law which forbids people giving tours without having a permit through the ITHQ.

“I’m seeing this invisible history, language that really needs to get out there more, and tourists want to hear about it too. I have tourists asking me about it all the time,” said King.

When King begins his tours he said he always begins with an acknowledgement of Mohawk territory saying, “I would like to acknowledge that we are on the un-ceded Indigenous territory of Tio’tia:ke and that the Kanien’kehá:ka Nation is the custodian of these lands and waters.”

It’s a script that is often used at ceremonies and events throughout the city. That includes ones mayor Valerie Plante attends, who also acknowledges the territory herself.

On tours for other companies where King sometimes works, he is often given a script, which doesn’t include that acknowledgment.

“I am given a script and that insists I use a different introduction. I slip the information in near the beginning or the tour when mentioning the history of the island,” said King.

King is a member of the Montreal Professional Tourist Guide Association (APGT). The association doesn’t have a policy either to acknowledge the territory or Indigenous people for its members.

“There is no directive whatsoever so most guides don’t say anything,” said King. He said he has brought up the board members of the APGT but has been ignored and said that he has also been blocked from the APTG Facebook group for being to much of an “activist.” The Eastern Door reached out to the APGT for comment via e-mail and has not received a reply.

King said he will continue to push for proper recognition.

“I do personally acknowledge it on my tours because I think it’s important, not only for respect and tradition but because it gives people an idea that this island has been inhabited for thousands of years.”