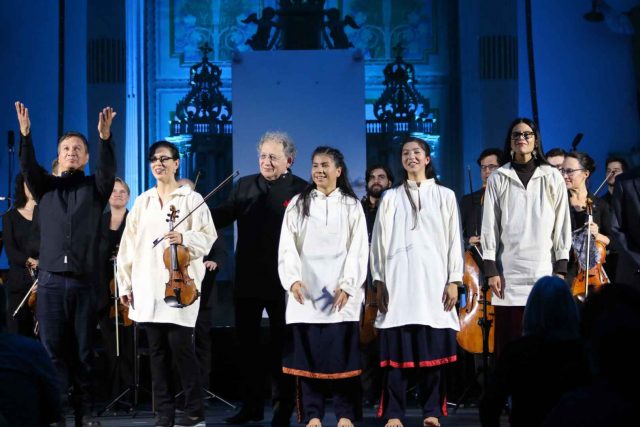 Together they came to a proposal for the memory of Saint Kateri, “a venerated and beloved figure particularly in Montreal, as well as across Canada and the world, and a guiding example of humility, kindness and strength,” MCO’s release said.

“It was our idea to bring into the music elements of First Nation culture, singing, language, and the story helped build this multimedia story on Saint Kateri,” he said.

Brott thinks through this character, both listeners and participants would better understand what was done in history.

“On purpose, I’m not trying to paint with a light brush, I just don’t want to be so emphatic as to insult anyone, but I recognize that some things are pretty horrible,” he said.

Brott talked about some challenges during the work, for instance, new compositional musical language.

“What Barbara has written needed for me to develop a new language to be able to communicate with my orchestra, and on very short notice,” he said.

Brott explained this music is a little bit between discipline and creativity in a sense of classical music and total freedom.

“When the musicians have to play together they need my help. Another time it is better for them to not have my help, when they can take their own creative role,” he said.

An 18-month length of multimedia work, one of the 200 exceptional projects funded through the Canada Council has many levels of this production.

The symphony orchestra, the music composition by Croall, a libretto by Akwesasne writer Darren Bonaparte, a strong performance by Mohawk violinist Tara-Louise Montour, the acting in Kanien’kéha, and visual projectors on the walls and ceilings gave a certain impression of Indigenous life and spirituality.

The title role of Kateri was portrayed by actress Kennedy Bomberry. Julianne Blackbird was the featured dancer in this creation.

Brott said he’d wish the viewers to be amazed.

Croall connected Brott with Bonaparte, a Mohawk historian, who wrote a libretto for this project.

His first book, A Lily Among Thorns: The Mohawk Repatriation of Káteri Tekakwí:tha, was a real history about Saint Kateri, but the libretto became a story as she was telling it.

“The libretto was based on her life as I understood it, how I figured she would tell her story. It is like she is reacting to an inquiry by the priests about the villages that she lived in,” said Bonaparte.

The first village was where smallpox broke out and killed her family.

The second village was later attacked by the French in 1666 and burned to the ground.

The third village was where the French commissioners came in and set up a mission. She was baptized and became a Catholic, against her father’s wishes. Refusing to marry, she left her village and moved with the Jesuit mission.

The final village was on the St. Lawrence River, present day Ste. Catherine, where she was free to practice her new faith.

Bonaparte believes bringing in the cultural foundation into the story is important.

“I noticed most authors ignore her culture she came from and they cut the context of the times. To a lot of those authors she is just a person who meets the Jesuits and suddenly the story begins. Her back-story of her being raised in a traditional Mohawk manner was always left out. It was not given the credit that it deserved,” he said.

For Bonaparte, the new work will help preserve what can be forgotten.

“Saint Kateri is a bright light in the dark colonial past; the new work helps to humanize her, restoring her own voice and context, rather than as an ideal of Christianity,” Bonaparte said for MCO’s release.

The writer hopes that beyond the entertainment value the viewers will get the depth of the story.

“As far as history goes you must face Saint Káteri Tekakwí:tha,” he said, because Saint Kateri, in his opinion, is “like a modern model for people, even if she lived 300 years ago.”

“She still has that strength of character that we need more than ever today, especially young women. They have so many challenges today that Saint Káteri Tekakwí:tha would easily fit right in a modern Mohawk context. She knows us already, so we need to know her,” he said.