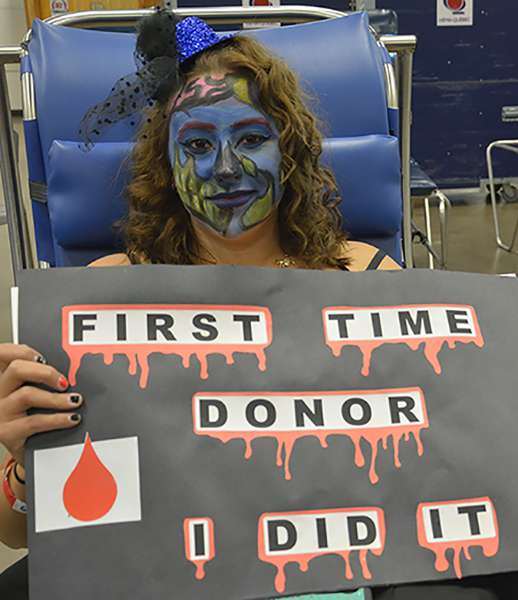 Donating blood and volunteering helps the community and makes a difference in peoples lives. (File Photo)

Why should you give blood?

What’s the point, when so many are donating already? What difference does your arm make?

Well, it’s a lot more complicated than that.

First off, blood has a shelf life, so even those people donating now will have to donate again within a couple of months, to make sure those shelves stay stocked.

Second, there is never enough blood to go around because it is so fragile and there are so many different types needed.

If you’re a universal donor, with Type 0 negative, then you are especially needed to donate.

Why, you still ask? Think of all the restrictions and the ones who can’t donate: cancer patients, people with diseases like HIV/AIDS; those who had tattoos in the last three months or travelled to certain exotic locales; people who are deathly afraid of needles and would never step foot onto a gurney to give; children and the elderly.

Add in the ones who can’t get time off work, are sick that day, are out of town, or just don’t realize the importance, and you’re left with a small amount of potential donors for The Eastern Door’s 18th annual Blood Donor Clinic.

Which means the bulk of the donating, the life-saving, the awareness and the caring, comes from about 100 people, local and non-local alike.

Imagine if just 10 percent of the ones living in the community donated – 650 people, roughly? Wow, we hope that becomes a reality one day.

But for now, we’re left with constantly finding people, veterans and newbies, to fill the blood banks for Hema Quebec.

If you can’t donate blood, volunteering is also a great way to give back.

Carol Boyer Jacobs has battled cancer twice so she can’t donate her own blood, however that’s not stopping her from playing a key role next Tuesday, October 30.

“Volunteering at the blood donor clinic connects me with donors, helps raise awareness to community members and joins me with other’s lifelines,” she said. “I am very honoured to volunteer in my community and help those in need.”

Boyer Jacobs knows firsthand what it’s like to deal with a scary and life-threatening disease, but luckily she didn’t need to access the blood bank.

But there are so many other sick Kahnawa’kehró:non who do.

“Having the desire to give the “gift of life” and being told I couldn’t was very disappointing and hurtful,” she said.

“On my last attempt, I was told I was unable to do so because of a recent treatment. Last year was no different. After completing seven months of treatment for a second cancer I knew I would not be able to donate again so I offered the gift of volunteerism,” she said.

This year, THE EASTERN DOOR is also helping to raise money for Karihwanoron Mohawk Immersion School, as it struggles to fund programs each year.

“I don’t know a whole lot about blood drives but I do know that blood donations have saved my own baby’s life when she was born,” said Karihwanoron coordinator Joely Van Dommelen.

“We need to keep giving, whether it’s blood or other ways. Let’s save lives!”

For Van Dommelen, the correlation between saving lives and saving the language go hand-in-hand.

The school’s parent volunteers will be collecting financial donations and selling raffle tickets and squares for a chance to see the Habs vs. Canucks in January.

All proceeds from the blood donor clinic will go towards helping Karihwanoron.

“It’s not only a way for our program to fundraise, it’s also a way to give back to our community and to those who will need it now and in the future,” she said.