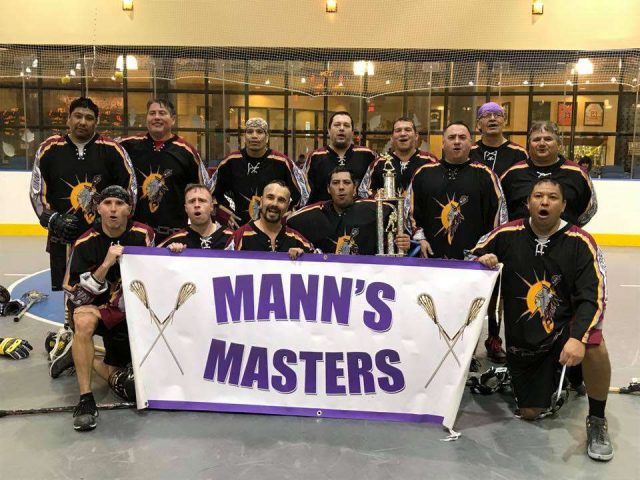 The mixed Mann’s Travel team came in third at the Ohi’yo tournament this weekend, thanks to strong defence and smooth offensive plays. (Courtesy Teiawenniserate Tomlinson)

The passion for the Creator’s game did not evaporate like the sweat off the backs of a core number of Kanehsata’kehró:non.

Today, as men with jobs and families of their own, they had the chance to return to the beloved sport in a newly-formed masters lacrosse team in Kanesatake.

“We never had a masters team before and I wanted to start one,” said Kevin Nelson, the team’s coach.

Early in the summer, Nelson created a Facebook post asking if any men over 35 wanted to start up a team.

“We had like 20 people interested but at our practices, we would end up with only five guys and a goalie,” said Nelson.

Despite the low turnout, the small group of men continued to practice together, even playing weekly exhibitions games with the Akwesasne Masters Lacrosse team.

“We said if we keep practicing and stop worrying about who doesn’t come then we can build a team off of our core group,” said Nelson.

Pumped for more opportunities to play, they booked three tournaments.

Yet still, things were not lining up for the teammates when their first tournament in Onondaga was cancelled two days before they left.

“We were disappointed but we didn’t let that stop us,” said Teiawenniserate Tomlinson, who’s been away from the game for over a decade.

Last month, about 12 men from Kanesatake and two from Akwesasne went down to The Wooden Sticks Festival under the name the Kanesatake Masters, for the very first time.

“We played on the Shore of Onondaga Lake in Syracuse. They say that the Peacemaker crossed that lake and that our game was played there over 1,000 years ago,” said Tomlinson.

At such a meaningful place to them, the Kanesatake Masters fought their way into the finals. Before the tournament started, one team pulled out while another forfeited later on.

They played against the home-based Onondaga team in the final, but ended up losing a close battle.

“For me, it was the first time since I was seven or eight years old that I played for Kanesatake in an organized tournament. It was a great experience,” said Tomlinson.

“It awoke something in me that had always been there but had been tucked away under all the obligations of everyday life.”

This weekend, three Kanesatake men reached out to the Akwesasne Mann’s Master team to play with them at the Ohi’yo tournament in Allegany, Salamanca, New York.

“We joined guys from Akwesasne, Onondaga, Kahnawake and some locals from Seneca territory to form the Mann’s Travel team. Awesome bunch of guys,” said Tomlinson.

“At this age level a lot of guys have responsibilities and can’t commit to playing in tournaments so each team faces the same problems. Oftentimes we will help the other teams and they help us the same way by lending us players,” said Nelson.

At the games it was apparent that the travel teams were at a disadvantage against teammates who play regularly together.

“But what kept us in the games was our will and determination. We worked and battled hard,” said Tomlinson.

The group made it to the semi-finals. After three periods, they were tied seven a piece against the Newtown Golden Eagles. In overtime, with 17 seconds left on the clock, the Golden Eagles scored.

“You know, none of us were too disappointed. In the spirit of our game, we played and left it all on the floor,” said Tomlinson.

At the end, the laxers came in third place overall – not bad for a team with some players still getting reacquainted with the Creator’s game.

Playing a rematch against the hometown boys, the Ohi’yo Masters, the Mann’s Travel team played a tight defence and eventually opened up their offence.

“We took back the lead and never gave it up. At one point, Ohi’yo scored a couple unanswered goals. It was clear we couldn’t count them out and they were battling hard,” said Tomlinson.

Feeling sore and beat up – it is masters level after all – the players are proud to have won the match 8-4.

The season iss over now, but Nelson is confident that they will start back up again next year.

“For me, the game plays an important role, it is helping me connect mind, body and spirit, in a period in my life where I really needed it. This game really is medicine,” said Tomlinson.