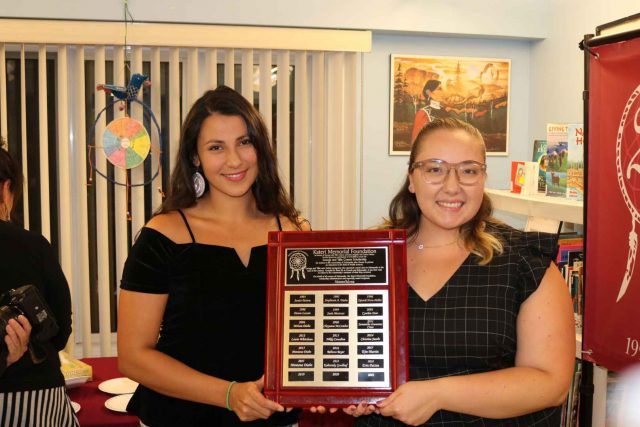 The award goes to a woman from Kahnawake pursuing higher education in the field of health sciences. The winners received a $1,000 bursary and a presentation of the award and its history.

“I’m honored that my family has a connection with the Mohawk community in Kahnawake because when our family was in need, my ancestor was given a chance to have a store in Kahnawake and we are very thankful,” said Allister.

The family’s history started when young George and Tillie Cramer were forced to leave their country of Poland and moved to Canada. They came to Canada as teenagers, where they found work and were able to marry.

Time went by, and soon after, the couple opened up a store in Kahnawake where they served children, women, and elders. The men were off building bridges and high rises.

Business was good until the tragic Quebec Bridge collapse in 1907, killing 33 men from Kahnawake and 75 overall. After the accident, the family had to move out of Kahnawake and settled in Lachine.

Although they were no longer in Kahnawake, they were grateful for how they were treated and never forgot their friends. They told stories to their daughter Ida, and in that spirit, Ida Cramer left money in her will to be used as a bursary to a Mohawk woman pursuing a career in the health sciences.

“I feel happy, it’s nice to be recognized for our achievements, it’s rewarding after all the hard work we’ve done, and it’s nice to be a role model for the community,” said co-winner Erin Patton.

Patton is pursuing a career at McGill in Bachelor of Science in nursing.

“Women are dependent on men all their life,” said Dr. Wiseberg. “Ida Cramer started this scholarship, in the idea of woman independence. She was a caregiver, and she felt the idea of health in Indigenous communities would be a perfect fit for this scholarship.”

“I’m super grateful because living away is difficult and the extra thousand helps a lot. We were so shocked about the surprise, we didn’t expect to get double of what we expected,” said co-winner Kahteraks Goodleaf, who attends Laurentian University and studies in Indigenous social work.

“It’s something we’ve been doing since the early 90s, and now the potential of more money coming in for future scholarships is amazing,” said Lois Montour, KMF executive director.

“For the past two years there have been two recipients, while in previous years it was only one,” said Montour.

The family was as delighted as they were surprised with the talent these two women have and how they will hopefully bring their skills back to the community in the future.

“We’re in a time where women are being recognized in their fields of work, and I believe that should be recognized in Indigenous communities,” said Wiseberg.