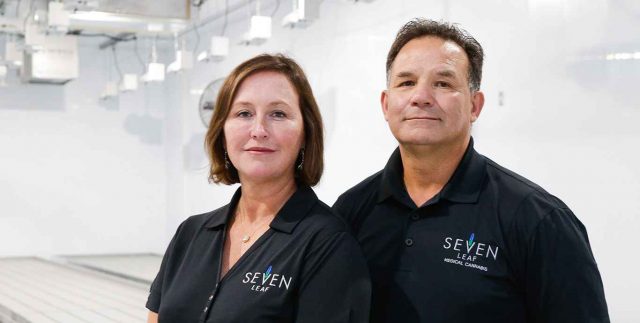 Loraine White (business development and legal council) and Lewis Mitchell (president) let out a huge sigh of relief when the federal approval of their cannabis production facility finally came through, making the Seven Leaf proprietors the first Onkwehón:we entrepreneurs to do so in the country. (Courtesy Seven Leaf)

Those who attended last week’s Community Decision-Making Process (CDMP) meeting know that when it comes to cannabis, strong opinions are held.

Kahnawake is not the only Kanien’kehá:ka community grappling with the upcoming federal legalization October 17, with some leaders looking at their communities with a serious concern.

Kanesatake and Akwesasne’s Mohawk Councils are both trying to ensure the communities have regulation in place, with each at opposing stages of the process.

While Kanesatake searches for funds to create and enact legislation and enforcement, the Mohawk Council of Akwesasne announced this week that an interim cannabis law will go into effect October 17, while a permanent law is developed.

The Akwesasne Interim Cannabis Regulations follow a cannabis survey gauging support for possession, sale, and regulation of the industry.

“We know that on the 17th, the federal law changes and we want to at least institute a mechanism whereby community businesses that want to get into the dispensary business have to apply to the Mohawk Council authorities,” said MCA grand chief Abram Benedict.

Cannabis purchases will only be permitted at MCA licensed dispensaries, and transported by approved routes.

Once the legislation drafting committee completes the permanent law, the community votes yes or no whether to accept the law.

Former Akwesasne chief of police Lewis Mitchell and former St. Regis Tribal Council chief and lawyer Lorraine White started working on the application in fall 2013, and the operation will employ around 70 community members.

“It was quite the celebration,” said Mitchell after finally getting approval. “It was quite a relief because it was a long, arduous process.”

Following the regulations and good production practices, Mitchell said, will ensure the product is safe, and is of good quality.

Benedict said the Seven Leaf management has remained very open with council about its operation throughout the permit approval process.

“They have been keeping us up-to-date essentially since day one, since they applied for a medical growers’ license,” he said. “We let them know that they were going to have to educate the community on what sort of line of industry they’re going into, and what the pros and cons are. They have been completely transparent with our council and done a really good job at keeping the council and community informed.”

“I can’t say enough about the support that council has given us,” said Mitchell, who has had to deal with three separate councils. “Doing that whole education process on the front end did a lot to help build some comfort level for the community as well as the council, and just being transparent with our council.”

Council members have toured the facility regularly since 2013, and Mitchell said the process required patience and humility to bring those opposed to the product to a comfort level with the operation.

The facility will start growing plants in about six weeks, Mitchell said.

Benedict said there were no dispensaries, save one on the island, selling approved CPD products.

A way, Benedict said, Akwesasne has avoided a situation like Tyendinaga or Kanesatake is through legislation.

“There is already a regulatory regime in place for tobacco,” said Benedict. “We have licensed retailers by the Mohawk Council to sell tobacco products, so I think through that regime we haven’t had any wildcats popping up.

“We’ve always been quite clear that we’re moving towards enacting legislation or community law that will govern the sale and distribution. People have understood that. At some point, you’ll need the support of your local government, be it for taxation issues or economic development, and not having authorization from the Mohawk Council is not the position you want to be in.”

Akwesasne’s unique position straddling the border with Cornwall Island surrounded by Canada and US customs can help deter unauthorized producers or distributors.

Benedict said his and other communities will need to remain vigilant in regards to organized crime elements looking to corner markets outside of the legal ones post-October 17.

“We don’t want an establishment supporting any way, shape or form organized crime or feeding into that system so we’re extremely conscious of this,” said Benedict.

“That’s why we’re working very quickly to put in regulations. That’s why we have our police force working very closely with agencies across Canada and the United States for organized crime and border enforcement and things like that.”

Mohawk Council of Kanesatake grand chief Serge Otsi Simon knows full well that the product is in the community already.

“Some have started doing this pretty openly, others are doing it kind of secretly, they’ve already started stocking their cigarette stores with edibles and some marijuana products,” said Simon.

Kanesatake Herbal Solutions, Sweet Green and Smoke Signals Kanehsatake are all operating openly in the community, and selling marijuana products.

Simon said some are telling clientele and others that they have federal permits to sell cannabis.

This would be next to impossible, as Canada’s Bill C-45 “The Cannabis Law” requires “notice be provided to local government, fire and policing authorities for all license classes except industrial hemp, analytical testing, or for sale licences where cannabis is not stored on-site.”

Thus, the Mohawk Council would need to approve any permit, as would the SQ in the region.

The Kanesatake council has approved a grow-op run by Kanesatake member Blake Freeman out of the old Bingo building (currently not in operation) for “medical purposes only,” said Simon.

Council has not approved the other dispensaries operating in the open.

Council’s decision to approve the grow-op was based on the company’s promise to share money with council, so it could develop a law similar to the one proposed in Kahnawake and Akwesasne.

“It was an existing structure, it was far enough away from residential areas, it’s a quiet spot and still easily accessible for inspections and so on, and the company had promised to give council $50,000, so we could start hiring people, to start taking apart the law and looking at how we’re going to implement this as a benefit of the community, and then go for consultation,” said Simon.

Funding, an issue for Kanesatake’s council on many occasions, remains an problem.

“We’re hoping to get some rules and regulations in place, but it was a lack of resources that stalled us here for the last year,” said Simon.

Simon supports marijuana for medical use, but not recreational, and responded to claims that growing and selling the product is an inherent right or traditional practice.

“The grand council at Ohsweken for the Haudenosaunee came out against this practice,” said Simon. “They said it’s not our way, it doesn’t belong to us, so we’re not endorsing this type of thing. Those claiming to be a traditional business are mistaken and really misleading their position.”

Simon is worried Kanesatake will edge towards a situation like that in Tyendinaga, where dozens of dispensaries operate in the open along main roads. His hope is to work with Kahnawake and Akwesasne, so all three communities in Quebec can address the issue.

“I’m hoping council can get the resources to get its own police force,” said Simon. “Make a tri-partite agreement between Kanesatake, Kahnawake and Akwesasne with maybe two inspectors that can service the three territories.”