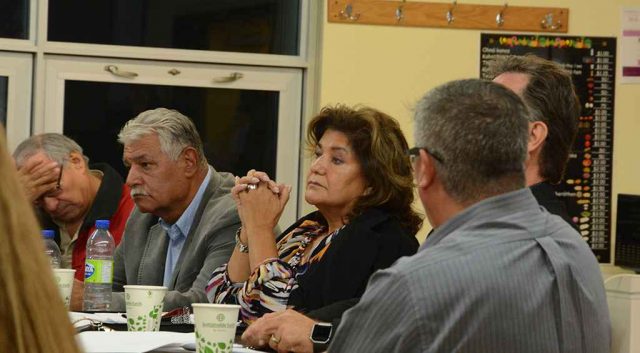 The head table at the recent CDMP meeting on cannabis legislation took heated questions all night last Tuesday regarding the legislation’s classification and council’s role in the industry. (Daniel J. Rowe, The Eastern Door)

From 6:30 p.m. on, the majority of Tuesday’s Community Decision-Making Process (CDMP) meeting at Karonhianónhnha School involved heavy criticism directed at council and the cannabis working group.

Council chief Rhonda Kirby, along with Marshall, Ron Skye, Dennis Diabo and Joe Delaronde, sat at the front of the room along with Leslie Skye, and took a volley of questions, mostly revolving around lack of consultation in drafting the law.

“Certainly the most popular idea is to have a referendum, and that’s what we’re going to be looking at,” said Kirby after the meeting. “We’ll go back to council tomorrow (Wednesday) and look at what the options are.”

By Thursday, it was unclear whether it was going ahead or not.

Derek Montour from KSCS and Dwayne Zacharie are also part of the working group, but were not at Tuesday’s meeting.

Though Kahnawake Legislative Coordinating Commission (KLCC) administrator Leslie Skye asked participants to fill out forms regarding categorization of the law (Type II) or the process, that topic dominated the entire meeting.

“That’s the biggest topic here, and it needs to be discussed, big time,” said one participant, shortly after Skye made the announcement.

“The concern with a lot of us here is that the community did not have a chance to have input into this law,” said Jeremiah Johnson.

“Cannabis legalization is going to effect the entire community, whether you smoke it or not. It’s going to change the very fabric of Kahnawake, and it’s something the whole community should have a say.”

Type II laws, “affect a segment or specific interest within the community,” according to the KLCC website. Johnson suggested in the meeting that the law be resubmitted as a Type I legislation that effects “the community as a whole and/or deal with collective or individual rights.”

Kwe’tí:io Goodleaf, who owns Greenleaf, which has been shut down three times by the Peacekeepers, repeatedly criticized the CDMP process.

“That’s not my law,” she said after the meeting. “I don’t identify with that. I’m my own person, this is my land, and I will do what my grandmother said I can do here, and I’ll do it with respect.”

Ron Skye gave a history lesson at the meeting about why council uses the CDMP process, and why it’s important to be involved in the process when legislation is first proposed.

“We went through this whole process with the community – extensive consultation – and we designed it this way, we modified it, there were changes to it to try and shorten it,” he said.

Council chief Gina Deer, along with Ron Skye, spoke several times in the meeting about the need for regulations for health and safety reasons.

The tobacco industry’s lack of regulation was cited several times Tuesday as a situation council is keen on avoiding.

“Why we’re doing it now is because Canada is legalizing the product and people in Kahnawake want a free for all, like tobacco. They want to be able to do whatever they want without regulation,” said Deer.

Without regulatory control, Skye argued, people will take advantage of the industry for personal game.

“We have to be vigilant from a public safety perspective not to let this happen,” he said.

In addition, proponents of the law said they do not want a “Tyendinaga situation,” where the community hosts around 50 unregulated dispensaries.

The vast majority of the roughly 75 attendees Tuesday were not regulars at past CDMP meetings, including those related to the cannabis law.

Some criticized the Mohawk Council for creating a law for its own financial gain.

“The MCK wants the regulations in place only because they’re going to make a bunch of money off it,” a community member said. “If there wasn’t money in it, would the MCK be as involved in it as they were?”

Council grand chief Joe Norton spoke a handful of times about the future reality when cannabis will be legal (October 17), and the fact that certain outside regulations apply in Kahnawake, such as driver’s permits.

“The simple fact in life is that there are things that are beyond our control to a certain degree,” said Norton. “We have to follow certain regulations with health standards for the safety of the community. That’s the reason why there’s an attachment to Health Canada.”

Johnson suggested, as he did in a letter to the editor in last week’s Eastern Door, a referendum of whether the community would approve of council drafting the law.

Norton did not object to the idea of a referendum, but added a caution.

“The only thing is, if it’s no, and we’re all bound by it, then we have to abide by it,” he said. “Not far from here there’s a Super Bingo that’s operating. Remember that? There was a referendum, a community-wide referendum and a lot of people showed up and the answer was ‘no…’ It still went ahead.”

Goodleaf and others left the meeting satisfied that their position was heard.

“Tonight, the council had a big surprise that everyone in the room didn’t want this law at all. They wanted big changes to it,” said Goodleaf.

“The numbers showed positivity on the side of trying to remain Onkwehón:we people with our own power, peace and righteousness. It’s important for us to show what we don’t want and work on what we do want, and sometimes it takes something like this to bring us forward.”

She admitted she does not vote and hadn’t attended previous CDMP meetings, but went to find out what was going on, and was happy to see so many people attend.

The Eastern Door asked Goodleaf if there is a way to move forward.

“Time has taught us that the control is almost getting away from us, and I think people are smarter and making smarter decisions because they’re more informed,” she said.

“I think social media and these phones have kind of dulled our minds, and yet we’re able to have access to more information.”

The Eastern Door asked a community member, who did not speak at the meeting, why they attended, and they responded that they wanted to be informed about the law and cannabis industry.

Did they get more information, they were asked.“No. I saw a fight,” the community member said.