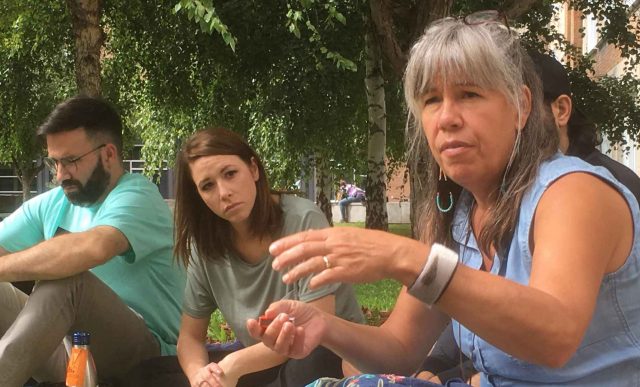 Elder-in-residence Vicky Boldo speaks to students at Concordia University, as part of the school’s continued work to indigenize the campus and broaden understanding of Indigenous issues. (Lindsay Richardson, The Eastern Door)

It’s the second week of class, and there are some new faces in the group. Right away, it’s obvious that no one quite understands what’s about to happen.

They sit in a large circle – some with pin-straight posture, others slightly hunched – forming a perimeter around an expanse of blankets laid on the floor. At its centre is a collection of mementos and items representative of Indigenous identity.

As Vicky Boldo, Concordia University’s Elder-in-Residence, makes her way around the circle carrying an abalone shell, lightly smudging the students with sage, she issues a warning.

“We’re going to shake you up a bit today,” said Boldo. “Because there are some really ugly, harsh stories in there.”

Wednesday, the class acted out “The Blanket Exercise,” first developed in 1997 by KAIROS Canada, an ecumenical human rights organization, with input from elders, knowledge keepers, and educators.

To those who have never experienced it, the exercise can be difficult to explain.

Its Creators tout it as a “participatory history lesson,” to “foster truth, understanding, respect, and reconciliation among Indigenous and non-Indigenous peoples.”

For participants, it consists of roaming around Native “territory,” the blankets, while events that unfold through a retelling of 500 years of colonial history effectively eliminates participants – many of them ‘killed’ by disease, poverty, false imprisonment, or internment.

The exercise is used in schools, as well as a sensitivity training tool for people working with public bodies – Montreal Police, for example.

“Sometimes the response is ‘oh I know all that,’ or ‘I’ve had enough,’ or ‘oh, it’s too hard,” Boldo explained. “It should be us who gets to determine when it’s exhausted, and when it’s enough, as opposed to ‘well we’ve done the reconciliation thing, let’s put it in the past and move on.”

The spirit of reconciliation is what drives in-class activities like this one – as well as other Indigenous mobilization activities at the university level.

Elisabeth Fast, an assistant professor in the Applied Human Sciences faculty, introduced the special topics course – “Indigenous perspectives and disciplines” – to fill holes within the university curriculum. It’s the second time the class is being offered as a special topics course.

“As a Metis professor, and one of the few Indigenous professors at the university, I noticed a huge gap in responding to the Truth and Reconciliation Commission’s calls to action,” she said. “But there is still a lot more we can, and should, be doing.”

However, visibility alone is one mark of progress when it comes to “Indigenizing” Montreal’s – or Canada’s – university campuses.

When Nakuset, executive director of the Native Women’s Shelter, was studying Applied Human Sciences at Concordia over a decade ago, there were hardly any on-campus murmurings about reconciliation or cultural parity.

In fact, she says, she purposely selected that degree, so she could go on to apply her education to the urban Aboriginal population.

The First People’s studies program was in its infancy – the development stage, and the only support provided to students came from the Center for Native Education – now Aboriginal Resources Canada.

“There has been a push for change for over a decade, but as always, it takes time,” Nakuset said. “But the ARC student services is much better than it was when I was a student. These students thrive because of these services.

There’s been a gradual push for visibility on campus in recent years. Fast and Boldo are both part of Concordia’s Indigenous Directions Leadership group, comprised of Indigenous-identifying staff members who work in tandem to apply the recommendations from the TRC to the curriculum.

McGill also appointed someone to a similar role. Kakwiranó:ron Cook, Mohawk from Akwesasne, is now the university’s Special Advisor for Indigenous Initiatives.
For its part, McGill regularly holds panel discussions on issues of Indigenous interest, holds a powwow on its grounds to ring in the back-to-school season (Friday), and works to incorporate Indigenous voices in the classroom.

However, any efforts made to introduce and maintain a healthy discourse on the issues, academic or otherwise, require reciprocity.

This is why the university – or Goodleaf specifically – kicked off a series of monthly seminars called “Decolonizing and Indigenizing the Academy,” where non-Native faculty members spend time in the community, learning history at the 207 Longhouse to open their minds and better incorporate traditional teachings.

“I was really excited when I heard about it because I know that it’s quite a privilege to be invited into a community as a large group without the group having a prior relationship with the community,” explained Sara Kennedy, an associate professor in the Education department, one of about 35 professors who ventured to Kahnawake last week.

“Compared to other universities in other parts of Canada, Concordia’s responses to the Calls to Action have not been quick to begin,” Kennedy added. “I hope that the university continues to make this a priority.”