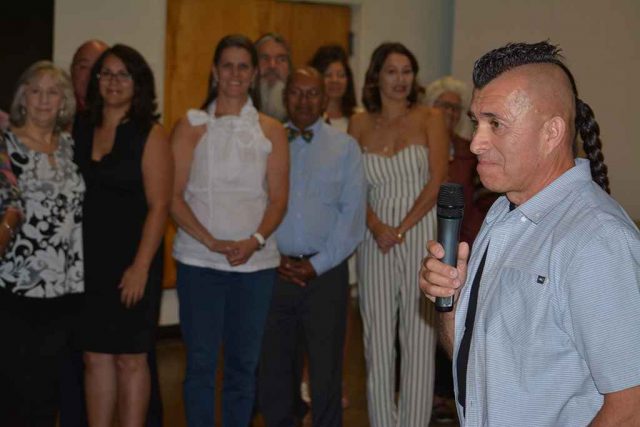 Gym teacher extraordinaire Danny Stacey made the crowd laugh and showed how much of an impact Survival School has had, as a majority of the crowd with some sort of hand in it were called to the front. (Steve Bonspiel, The Eastern Door)

They came for the meat pie and they stayed for the drinks, dancing and reminiscing.

To a packed house of over 300 people, Kahnawake Survival School’s 40th anniversary bash last Saturday was a celebration of not just a Kahnawake-run high school, but of a powerful fight that changed the educational landscape here, making history at the same time.

Parents and students faced down Bill 101, the Quebec Charter of the French language, which was adopted August 26, 1977, that would have restricted their access to English schools thanks to Rene Levesque, leader of the separatist Parti Quebecois; and something had to be done.

So on September 6, 1978, a huge walkout of Howard S. Billings, was organized and KSS was the next step, bringing home so many local students to the community.

With the backdrop of signs adorning the walls from that era calling Levesque and the bill out, Saturday night was less about fighting Bill 101 and more about celebrating the fact that Survival School is still going strong.

Elder Geraldine Standup, who was one of the 13 founding members of the Kahnawake Combined Schools Committee, and gave a special shout out to Frances Rice, everyone’s beloved administrative assistant who was always there when you needed her.

“She was the glue, the real glue, that kept us all together,” she said, to applause, with Rice in the audience.

To the delight of the audience she recalled memories of Rice chasing her little boy, yelling “Jonathan!”

Earlier, she also referred to Connie Jacobs, Leatrice Beauvais and Beverly Beauvais as the Three Sisters – “the three Mohawk-language teachers who were like our mothers at Survival School.

“They were very very special and I think it was on their backs that Survival School thrived. So I wanted to bring them in tonight, into our memories and our minds,” she said.

“I grew up at Survival School – I was so young at the time – but somehow we managed. We didn’t have university degrees but what we had was dedication to our children, confidence in each other and trust in each other to do right by our kids, and we did,” said Standup.

Lynn Beauvais read an excerpt from her late mother Jeanine Beauvais’ speech at KSS back in 1983:

Jeanine was one of the founders of KSS.

“We became convinced that the people of this town should become more aware of the value of being Mohawk, otherwise we would not survive as a people,” she quoted her mother as saying.

“Our people were intelligent, with great skill in government and oratory. They were people to be proud of.”

The mood at the Knights of Columbus was light and the pictures in the photo booth setup were zany and fun, but for organizer Morgan Phillips, it was the protest signs on the wall that meant something personal to her.

“My mother (Rita Phillips) drew the Rene Levesque one…they were kept in a plastic bin all this while, we made them out of sheets. They were like brand new when we took them out,” she said.

“When we opened the box, the sign she made was the first one we pulled out. I felt proud to be her daughter, and proud that she was so active at the time. I felt she was with us this whole time and she’s probably proud of me right now for being involved in education,” said Phillips.

Rita Phillips was “a long time educator, activist, artist and she taught at Indian Way School when it started,” said her proud daughter. She passed away in August 1994 at 65 due to cancer. “It’s really impressive to see so many generations now, that have passed through the doors of Kahnawake Survival School,” said Joe Deom, another original KCSC member.

The establishment of KSS was in part a response, Deom said, to Bill 101, but the parents also “wanted and needed a high school right here in Kahnawake.”

“It really was a community effort.”

He recounted a story when he jokingly told the KSS students the day before: “Rosie’s 92 and I’m 91, and we’re going to be here for the 50th anniversary.”

“Most non-Indians are not aware of the state of our culture, how could they give our Mohawk children the pride they needed to exist in this complex world? We have to give it to our children,” read Jeanine Beauvais’ words from 25 years ago. “The Kahnawake Survival School seemed like the only answer.

“I would like to see more understanding between traditionalists and the conservative factions of our community. We need to remember to love one another and try to be more understanding. Learn as much as possible about your people, your heritage, your history.

“You can learn from the past how to deal with the future. Pass it on to your children. Learn the language and you will feel Mohawk. Many young people never find out who they are and lead a hopeless life searching for themselves.”