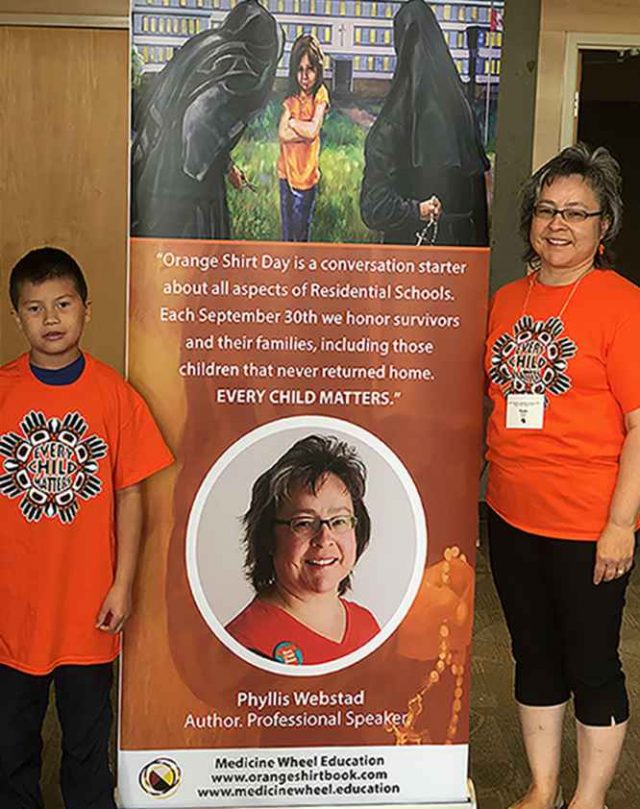 What’s tougher than writing a residential school story for children?

What do you write about? How do you frame it? What topics do you bring up?

That was the issue Phyllis Jack-Webstad had with her first endeavour into the world of children’s books, as she published The Orange Shirt Day recently, a story about her one-year experience in residential school as a six year old.

The first publisher Webstad met said it was too heavy for children.

“I went through a publisher who said the residential school issue was an adult issue and I need not be traumatizing children, and I should write it from a perspective of a kid scared to go to camp,” said Webstad. “So that set me back a couple of years.”

What came out of that experience and eventually writing it, however, was a form of catharsis.

Nuns took her orange shirt away from her on the first day and she never got it back.

“Orange Shirt Day started in 2013 and right away I thought about writing the story because not a lot of people were understanding where the story came from,” she said. “I always wanted it to be a children’s book.”

Early publishers wanted a manuscript, but all she had was a general outline. Then she found a publisher, Teddy Anderson from Medicine Wheel Education, who specialized in bringing oral stories to paper. He worked with other Onkwehón:we writers previously in the same fashion.

A ghostwriter was hired and they talked by phone and email two to three nights a week, January until June.

“It’s my story and that does not include sexual abuse at residential school, but I wouldn’t include it anyway if it was for a children’s story,” said Webstad. “Orange shirt day and this book are a conversation starter.”

One of those conversations is the painful reality of how residential school survivors put their compassion and outright emotions aside, sometimes for survival, other times as a teaching tool for children who would be dealing with the same things they did in residential school.

“Granny attended residential school for 10 years and sent all of her 10 children there, as well as my cousin and I,” said Webstad.

Her grandmother, Lena Jack, who turns 100 years old in late September, and is in failing mental health, had a phrase she would say to protect herself and the children she nurtured.

“She would cut off affection probably around the age of five,” said Webstad. “You were no longer hugged, that sort of stuff. Granny could never say I love you. That was a way of preparing herself and for me. Even today I never heard her say I love you – it was a hard thing to say.

“So she would always pat us on the head and say “what loves it.” That was as close as it came.”

Amazingly, what came out of Orange Shirt Day and the children’s book and the pain and suffering her family went through, was an educational piece of curriculum meant to change those very behaviours towards her Secwepemc (Shuswap) people – and all Indigenous people in Canada.

It is set up to break down stereotypes and start a dialogue among children at an early age – the same age she was when she went to residential school.

“It creates empathy and gives an understanding of the history in the schools and of why,” she said, of the book that is available in English, Secwepemc and French.

There have been roughly 500 books sold so far and the official release date is September 1, to coincide with back to school.

“It’s been crazy without the book,” said Webstad, so she is “actually kind of scared” now that another layer has been added.

Her book tour schedule is full until November, as she promotes the book across BC and Alberta.

The Orange Shirt Day commemoration of residential school victims and survivors is on the 26th of September in her current home community of Williams Lake, BC, although she won’t be able to participate this year due to the demands as a new author.

Officially, Orange Shirt Day is September 30, and a few years ago Kahnawake joined in the festivities.

Recently, there has been a push for Orange Shirt Day to become an official holiday, furthering Webstad’s reach and education for everyone in Canada.

It’s part of the 94 recommendations of the Truth and Reconciliation Commission, and is being worked on by the Assembly of First Nations and politicians in Ottawa.

For more information on the book, and how to get The Orange Shirt Story or related curriculum in your area, visit www.rangeshirtbook.com or www.medicinewheel.education.