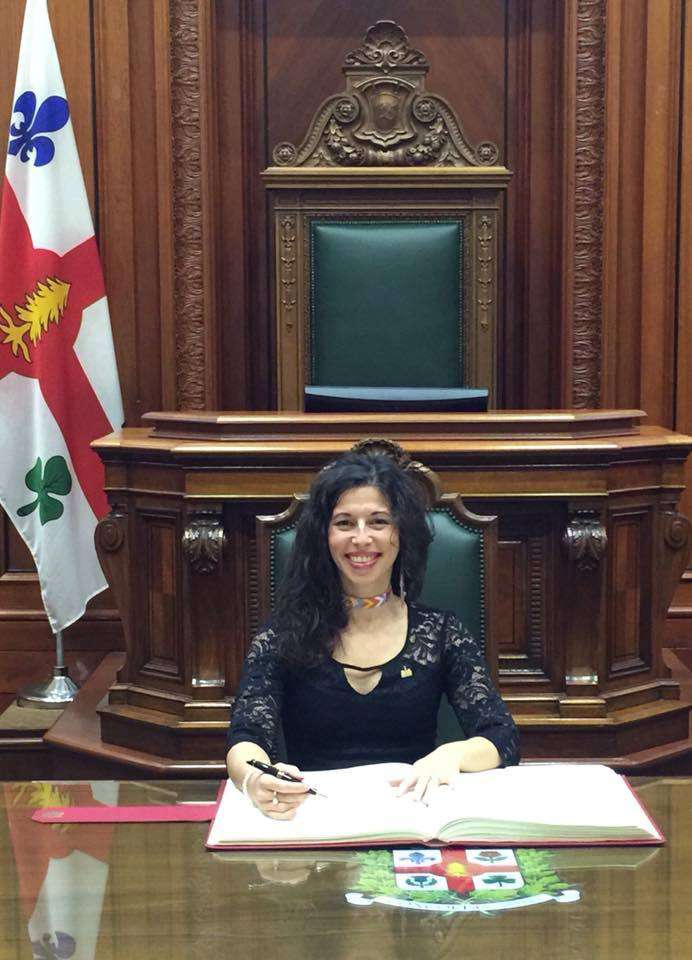 Montreal is making strides towards reconciliation with the appointment of Marie-Josée Parent to a key position.

Marie-Josée Parent apologizes for getting to her messages so late – but with baby in bed, and her husband in a meeting, she finally has some time to catch up with correspondence.

“It worries me a bit,” she writes. “I am not quite sure how I will manage to balance my family life and my work life.”

Not only is Parent in the throes of a new role – mother to an infant daughter – she has another “baby” in her charge.

As a newly-appointed member of Montreal’s Executive Committee, moving forward, Parent will oversee the city’s dossiers on Culture and Reconciliation.

“I miss my daughter when I am at work, but I already love my new role,” she said. “I don’t think this is going to be an easy one!”

Parent will sit as an independent councillor and an associate member of the executive committee, and has had an integral role in the drafting of a reconciliation strategy for the city – the “most important” project to tackle head on, she said.

Creating a modern, reconciled metropolitan city was always a priority for Parent, who previously said she was inspired by the work undergone in Vancouver to also create a reconciliation strategy.

“I believe that we need to be more honest when it comes to our history as a country, and work on celebrating people’s self-determination instead of being afraid of it,” she said.

Also within the mandate is the need to address the calls to action of the Truth and Reconciliation Commission and implement the UN’s Declaration on the Rights of Indigenous Peoples.

While both “thrilled” and “humbled,” Parent does concede that it’s a big responsibility.

Those who can’t affectionately call Parent “mom” can call her, in all seriousness, a “history-maker.”

Last year, under former mayor Denis Coderre’s administration, she became the first Indigenous person to be appointed to Montreal’s Municipal Council since its formation in 1833.

It was an historic election, and Parent – her Mi’kmaq and Acadian roots – took on a role as city councillor for Champlain-L’Ile-des-Soeurs in Verdun.

Mayor Valerie Plante released a statement ahead of the official appointment a week-and-a-half ago:

“Ms. Parent was elected by proudly displaying values and aspirations that are in direct line with ours. Her arrival on the Executive Committee is great news for our administration, for Montrealers, for the cultural community, and for the cause of reconciliation with Aboriginal peoples,” Plante said.

Parent’s personal causes – things like “reducing inequalities” and “bringing dignity to all people” – are longstanding.

Even before becoming embroiled in local politics, she studied in philosophy and the arts before going on to serve as director-general of DestiNATIONS, and as co-president of the Urban Aboriginal Strategy Network.

The whole intent of veering into politics, she said, came from “wanting to have different tools to work on issues that I believe are essential to our well-being as a society.”

She also believes that “culture, when shared and practiced together, is the best way to open up ourselves to the other, and recognize that in the end we are all human beings,” Parent said.

There have been murmurings Parent’s appointment is a critical public-relations move for the City of Montreal.

Recently, a city clerk verified a petition that amassed over 20,000 signatures, forcing the city to eventually hold public consultations on systemic racism, prompted by – among other things – a lack of diversity among Executive Committee members.

The Indigenous community in Montreal is comprised of approximately 25,000 to 40,000 people – less than one per cent of the overall population.

With that in mind, every Indigenous figure appointed to a political or public service role is making strides for their people.

Marie-Eve Bordeleau, a Cree lawyer and mediator, was appointed the city’s commissioner of Indigenous Affairs in February – the first job of its kind in Canada.

Like Parent, Bordeleau is also charged with leading reconciliation strategy and implementing the UN’s declaration. But her position is less politics and more public service. Among her activities, Bordeleau ran a mobile mediation clinic for Indigenous people with Kahnawake lawyer Martha Montour.

Parent, on the other hand, takes on a more active political role – she may eventually have to convince elected officials to adopt the strategy as an official project of the city.

Nakuset, executive director of the Native Women’s Shelter, bolstered Parent early in her career because of her “brilliance, drive, and professionalism.”

Though Parent’s supporters believe her to be well-equipped to thrive in her new role, Nakuset said the burden should not rest only on hers and Bordeleau’s backs.

“All city council has to take steps towards reconciliation and make change,” she said. “I love both ladies and regard them highly. I just think the city has to do more than hire two Indigenous people and load the work on them.”

Looking ahead at life, Parent sees a learning curve – learning how to say no, and how to prioritize.

“I am lucky because two of my colleagues are also new moms, so we can share our challenges and the solutions we find,” said Parent.

Survival School students get to adopt a river