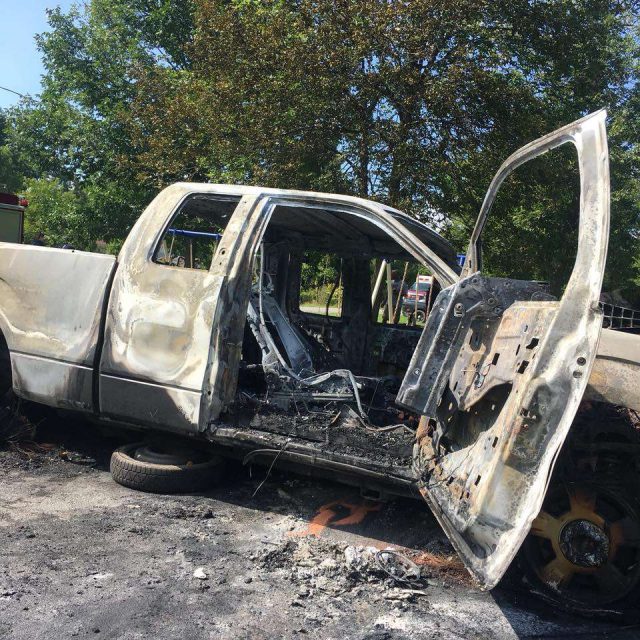 It was a scary moment when a family on OCR heard there was a fire at their home while they were away, and their teenaged son was in the house sleeping. (Courtesy Kyle Diabo)

It was a scary and anxiety-filled day for the Diabo family two Sundays ago, as their truck burst into flames while nobody was home.

The Incident occurred at 1:38 p.m. when multiple calls were reported of a truck on fire on Old Chateauguay Road.

“It was completely shocking to get a call from our neighbour asking us if we are home, because she can see large flames coming from our house,” said Gloria Keane-Diabo.

“We didn’t know what was burning until someone said it was my husband’s truck,” said Keane-Diabo.

The family was not home to witness this event as they were near North Montreal, while their other son Kye Diabo was on the other side heading to Lennoxville.

Everyone in the family was notified of the situation as flames were seen as far as Rabaska’s.

“We got numerous calls at 1:37 p.m. that there was an F-150 on fire, but by the time the officers got there, it was fully engulfed,” said assistant Peacekeeper chief Jody Diabo.

The incident was severe for the fire brigade as well, as the fire wouldn’t go out with mere water.

“We had a hard time getting it out because of the metals, we had to use special extinguishers, and nowadays water doesn’t help. We have class D extinguishers, and it’s used for magnesium and batteries, and water is useless with these type of situations,” said KFB fire chief David Scott.

The incident was so severe that not only was the truck in flames, but everything around it was damaged, including a bike, a playground set, part of the house and a majority of their driveway. “We are grateful although in shock, but things are replaceable, we’re just glad no one was hurt,” said Keane-Diabo.

The fire wasn’t the only thing the family was worried about. Their 14-year-old boy Tyler was inside the house sleeping as the truck was on fire.

“First thing that came to my mind was my son. I told the neighbour to please enter our home and get my son. I then called the Peacekeepers and was thankful they were already on route and informed them also my son was in the house asleep. The scariest part was his room was closest to the fire,” said Keane-Diabo.

Officers responded to the call and were on the scene in minutes, controlling the situation.

It is still unknown what caused the fire but arson is not suspected.

“It looks like it was accidental, the truck wasn’t used in a few days, and it could just be a malfunction,” said Scott.