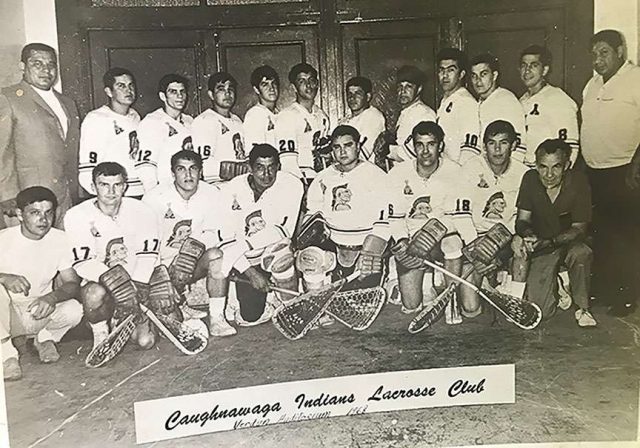 Game one at the President’s Cup today will feature a rematch of the 1969 finals that Nanaimo is preparing for when they faceoff against the Caughnawaga Indians. (Courtesy Shawn Swanson)

The reason is rooted in history.

Game one between the Timbermen and Indians kicks off the tournament, and will recall the 1969 President’s Cup finals in which the Nanaimo Luckies beat the Caughnawaga Indians on their home turf.

“We have a ton of articles from when our Luckies went out there, and we have the ’69 Luckies as part of the opening ceremonies when we play Caughnawaga,” said Timbermen team governor Shawn Swanson. “It’s something pretty neat for us as well.”

The game will be a rematch for families of the two historic lacrosse programs.

The Timbermen organization is excited to promote the familial history and connection between the two teams.

“We wanted to do the faceoff for the Nanaimo game just after the opening ceremonies, with Jerry Shires doing the ceremonial faceoff with his grandson and someone from Caughnawaga,” said Swanson.

Corey’s son Kevin was also a lacrosse player, much like Jimmy’s son Eric (Dirt), the coach of the Indians.

“It’s a family and a history thing,” said Swanson.

Swanson is working to scan articles from the time to draw young players’ attention to the history of the sport in the region.

The tournament will also give those Nanaimo Timbermen who played in Kahnawake in 2013 in the President’s Cup a chance to repay the hospitality they received in the community.

Swanson played on the Timbermen with Nanaimo in 2013.

“Highlight of my career,” he said.

Swanson hopes that Nanaimo will be able to compete with the big dogs from the east, as the team has failed to push into the medal rounds in recent years.

“There’s a ton of pressure,” said Swanson. “We’ve been to a few in the last few years and haven’t done that well, but I think we’ve got a stronger team this year.”

Though fires are burning in the interior of BC, there is no danger of fire on Vancouver Island. Smoke has wafted throughout the province over the past weeks, but it should not dissuade a trip to the west.

There’s a ton of sightseeing and tourist attractions to check out for those from Kahnawake making the trip.

“We always hike the Sooke Potholes, amazing waterfalls,” said Squire. “Tofino is the surf capital of the island and the culture there is pretty unique.”

Swanson added some suggestions of places to see for those making the trip.

“The city is amazing,” said Swanson. “There’s Newcastle Island and a floating pub out in the harbour, and, if people want to get up to Tofino or Ucluelet, that’s definitely worth the drive to get up to the far west coast.”

As for preparing the weeklong tournament, Swanson summed it up in simple terms.

“It’s chaotic, but we’re getting it done,” said Swanson.

A special welcoming ceremony will take place this morning with the Snuneymuxw nation canoeing from Newcastle Island to the harbour with the team captains of each team to welcome and grant permission to the visiting teams.

The opening ceremonies will take place at the Frank Crane arena before the Indians-Timbermen game.