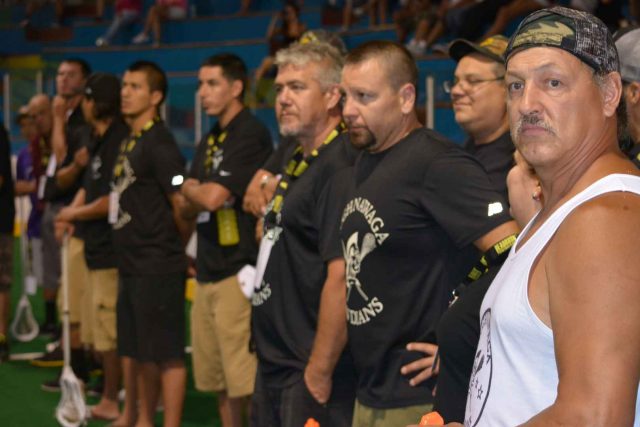 In 2013, the Caughnawaga Indians settled for a bronze medal at the President’s Cup in Kahnawake. After a spectacular finish to the playoffs this year, Dirt McComber’s Indians head to Nanaimo looking for a different colour of medal. (Daniel J. Rowe The Eastern Door)

The wait is over, and the big dance begins.

“We’re going with guys that can make it, and we have to fill in the gaps for guys that can’t due to work commitments and all that,” said McComber.

McComber, who is also the TNSLL commissioner, was forced to make a tough decision to forfeit the final series against the St. Regis Braves after Brave John Jacobs attacked ref Clint Jacobs ending the game and series.

The Eastern Door covered the event and decision in last week’s edition.

“I did what I had to do. Not everyone’s going to like it, but we’ve got to move on,” said McComber. “We’re trying to ice down this black eye we got for the league.”

The Indians play the Nanaimo Timbermen in the historic opening game.

The Mohawks’ rivals, the Capital Region Axemen (Ottawa), will make the trek to Nanaimo for the first time since 2015 when the Axemen came runners up to the OLA’s Six Nations Rivermen.

The Axemen looked good in an admittedly weak league this season and eliminated the Mohawks in two games to win the QSLL.

The other Haudenosaunee team at this year’s tournament is the Onondaga Redhawks who eliminated the Tuscarora Tomahawks in six games.

The Redhawks won the cup last time it was on the west coast in 2014 in Coquitlam, and also won the tournament in 2010.

Ontario’s Senior B League ended with the Oakville Titans outlasting the Six Nations Rivermen to book their tickets to the big dance for the first time in the team’s history. Ontario’s representatives are always teams to watch, making the finals in five of the past six cups.

From the Prairie Gold Lacrosse League it’ll be the Saskatoon Brewers, who are heading to Nanaimo for the franchise’s third straight President’s Cup trip.

Rocky Mountain Lacrosse League’s St. Albert Miners have won back-to-back cups and will be another team to watch after developing a solid program that has surprised many big teams.

BC’s Ladner Pioneers round out the competition.

Tournament organizer and Timbermen team governor Shawn Swanson said the competition will be pretty even, but, as with all President’s Cups, the quality of the teams typically doesn’t reveal itself until the first faceoff.

“It’s a tough tournament in the sense that you don’t really know what you get until you start seeing them play, and you don’t know what kind of competition they’ve been playing against,” said Swanson. “Looking at these rosters, it’s pretty even from top to bottom. Anyone can win this.”

For the Indians, McComber started to see his team gel late in the season and felt that Caughnawaga would have been a good bet to win the league.

McComber is intent on bettering his team’s 2013 cup run that saw the Indians take the third-place prize in Kahnawake.

“I think the guys that we pick up are going to make the team stronger and represent to the TNSLL that we are a contender. We want to go there showing that we are a league that can handle ourselves with respect on the floor, and in the end come back with the hardware,” he said.