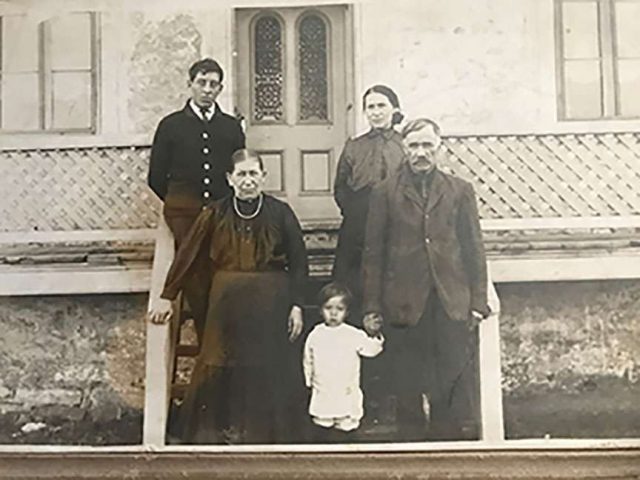 The First World War had yet to be waged, farmland was the primary type of property in the community, and a small but soon to be large family posed for a picture.

The photo dates from around 1910 and features Konwakeri Margaret Paul (Phillips) and her husband Paul, along with Konwakeri’s father Jacques Phillips and the couple’s first son Peter.

It’s taken in front of the family’s stone house across from where the Moose Club is today.

Konwakeri is pregnant in the picture with the couple’s second child Thomas. Girls Annie, Monica and Mary (born in 1920) followed Thomas, and then twin boys Harry and Kenneth.

“They were all born in that stone house,” said Mary.

As was often the case for families of the time, not all of the children grew to adolescence. Kenneth died at three months old, and Peter did not live past five.

Mary remembers her early years when she was the youngest child.

“I was the baby for the longest time,” said the 98-year-old. “My mother didn’t let me go to school till I was seven years old. She said, ‘oh you’re so poor.’ She said, ‘you got to go out there in the rain and snow. You better stay home.’ She loved me so much, but I got behind. I started late. Everybody was younger than me, but I caught up.”

The photo is likely 10 years before Mary was born around 1910.

The family also lived through a tragedy somewhat common to those in the mid-1900s when Thomas died ironworking in the early 1950s.

“They had a beam and the wrecking ball was swinging early in the morning, it was very bright, he was walking up a beam and the operator of the ball didn’t see him, and my brother didn’t see the ball swinging,” said Mary. “It hit him and knocked him right off into the river.”

The house in the photo included an “ice house” on the property the family used to store meat. The building was a stand-alone structure with no windows and one solid door filled with ice.

“We always had animals,” said Mary. “He used to butcher the animals, cut them up, and put them in that ice house, and store the meat in there because he had all the ice from floor to ceiling. The ice kept all year round. We used to go to the river to get the ice.”

The family always had cows, two pigs and other animals, and Mary remembers her father’s utilitarian character bred from growing up on a farm.

“He did everything,” she said. “He used to know how to do things.”

Mary also remembers with fondness her sister Monica’s habit of being distracted when doing chores such as milking the family’s cow, which all kids were taught to do.

“She was always in a hurry,” said Mary. “So she said, ‘I’m finished,’ and took her pail in the house. My grandfather said, ‘there’s not much milk in here.’”

Jacques emptied the pail, returned to the cow and came back with an equal amount that Monica had milked from the same animal.

“She left half of the milk in the cow,” laughed Mary. “Everything she did in a hurry.”

Mary’s mother passed away in 1959, and her father died a few months later, two years after Mary gave birth to her daughter Roberta.