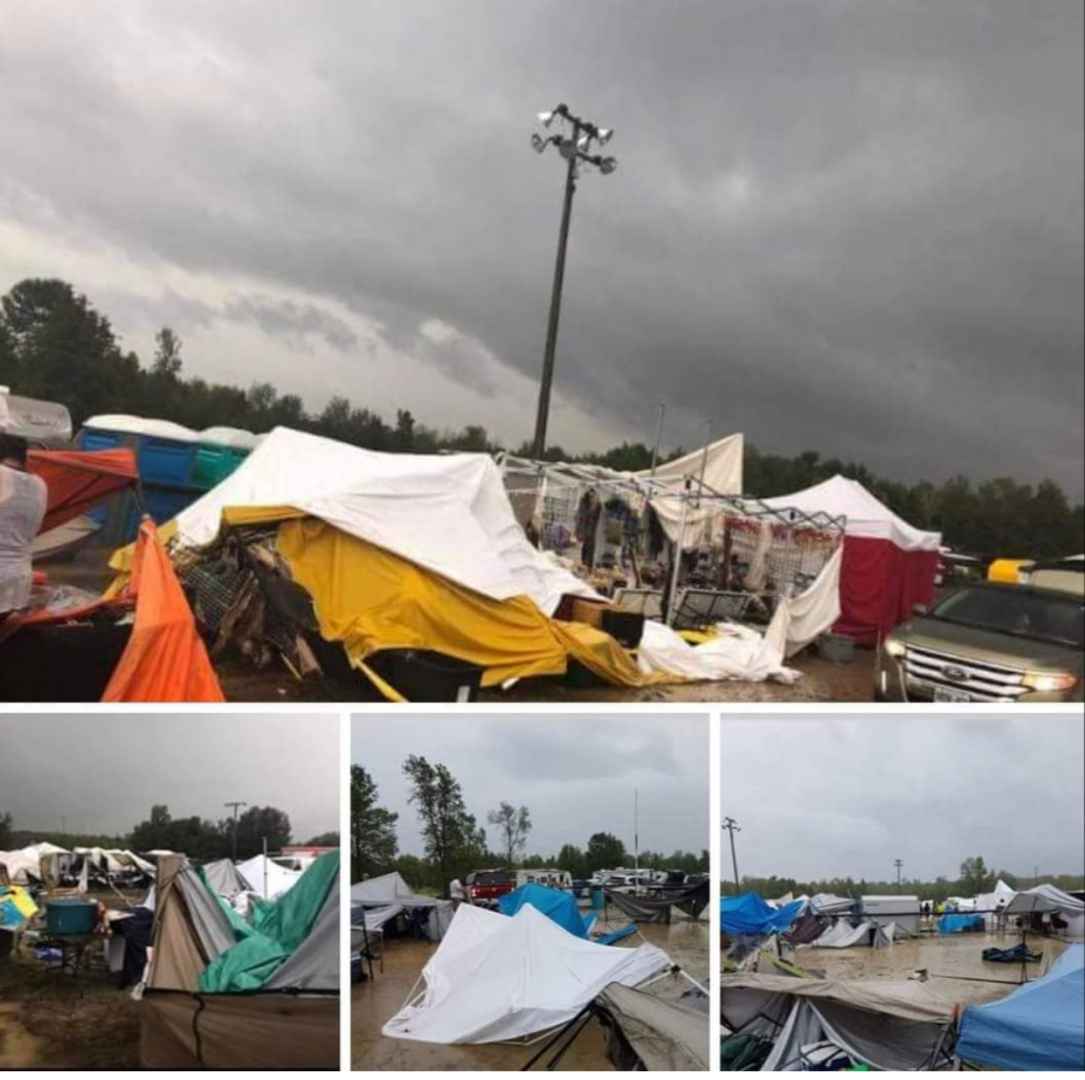 Tammy Beauvais got more than she bargained for after a freak storm hit the powwow she was attending. Her powwow days are winding down, she said. (Courtesy Tammy Beauvais)

If you’ve been to a powwow, chances are you’ve seen clothing designer Tammy Beauvais’s display tent. For the past 20 years from May to September, the Kahnawa’kehro:non and her husband Michael Yellowhair have been hitting the road almost every weekend.

The duo set up shop at powwows across Canada and the US, from P.E.I to Alberta and as far south as New Mexico. “It’s a lot of work, you drive for hours to get to a powwow. Set up takes maybe five-six hours,” said Beauvais. Generally she gets to about 20 powwows a year.

Beauvais describes life on the powwow trail as being part of something bigger than just setting up shop. “Everybody knows everybody, it’s like a travelling community.”

This year Beauvais has only been to around 12 powwows. She said it’s time to start slowing down after two decades of being on the constant move.

“We’re not just working weekends, we’re working all the time, we have to come back and do production, design, marketing, sales, the website… all that good stuff.”

The furthest Beauvais travelled so far this year was to the Manito Ahbee Festival in Winnipeg back in May. But it was the Wikwemikong Powwow on Manitoulin Island in Ontario two weeks ago, that she’ll remember the most from this year.

A microburst hit the powwow, which leveled almost all of the arts and craft vendor tents. Beauvais said there were only about five tents left standing out of around 40.

“I thought we were going to die, we were in our tent holding things down. My husband managed to make a little space for me to get out. It was bad. People were emotional, it was a hard thing to go through.”

Beauvais’ two tents were destroyed in the storm, which she had to replace. She estimated that five percent of her stock was lost and another 20 percent damaged. The damaged product was salvageable, but had to be put on sale to recoup some of her losses. She said that she felt lucky because she will recover, but that some businesses were probably wiped out as a result of the storm. It was the first time she had weathered a storm that severe in 20 years.

Over the years the biggest change she has seen is the amount of imported products sold at powwows. “That’s really disappointing,” she said, adding, “a high percentage of the product sold now is from China.”

Big companies are making it hard for small entrepreneurs who do authentic hand made merchandise to compete. That worries her, and she hopes that will change before it gets too big.

But Beauvais said it’s mostly a very positive experience being on the powwow trail. Seeing the beauty and variety of the land in all the different territories, enjoying the people she meets, the food and, of course, the powwow dancing are all benefits of being a travelling vendor.

Watching powwows grow where they weren’t before is especially gratifying, she said.

“Especially in the east coast, New Brunswick, Nova Scotia, and P.E.I, from having really nothing. Maybe one in the east coast to having one in almost every community in only a few years, like five years!”

While Beauvais said she doesn’t have a favourite powwow because they change from year-to-year, the food at the east coast powwows is her favorite. “Panmure Island in P.E.I., they have a beautiful feast. They have a traditional powwow too and they have free lobster. It’s on the ocean and it’s just amazing,” she said.

By the end of the powwow season Beauvais will be taking next summer off, which will be a much-deserved break. In the meantime, if you want to see Tammy Beauvais’s merchandise you can find her at the upcoming Rama powwow in Ontario and at the Akwesasne powwow Labour Day weekend. You can also find her online at tammybeauvais.com.

If you’re looking for powwows elsewhere, the Kanehsatake Traditional Powwow runs next weekend, while McGill University’s powwow is September 21.