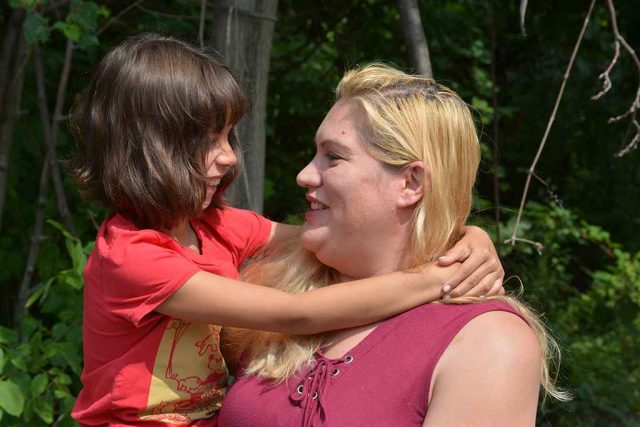 Paula Paul is worried about her credibility and her daughter, as the housing investigation continues to long course. (Steve Bonspiel, The Eastern Door)

In the original housing letter Paula Paul received on May 29, signed by then housing general manager Iris Jacobs, it said she owed $26,510 and required her to go to a meeting to clarify the amount, or, worst-case scenario, face eviction.

She met with Jacobs, but could only find nine receipts.

In a follow up letter, dated July 17, the information is further expanded on, including calling off the threat of eviction, and asks Paul to discuss the issue with executive financial officer Paul Rice directly to rectify the potential arrears owed.

When she first received the letter, she “looked at it and said what the fuck? I was so very surprised and confused,” she said.

Also, “the receipts I supplied were not deducted from the amount owed,” said Paul, after she spoke to Rice this week.

Paul figures she owes roughly two month’s rent, or $866; not the huge amount she’s been accused of. However, she has never been given a statement of exactly how much she owes until now.

“I moved into the apartments in 2009, so basically they are saying I never paid rent,” said Paul, who now pays $433 a month.

At a certain point, for about three years, she paid $15 extra per month – $400 instead of $385 – but that money has not been traced, even though she asked housing about it.

Paul has been seeking advice on what to do, but is holding off on looking into potential legal recourse until the investigation is over.

“The responsibility for a manager is to verify the amounts going in and out of the department (housing) records supplied by accounting on a monthly basis,” she said.

“It is sad to say that if there was any wrongdoing a responsible manager would have caught the discrepancies within a year, not eight years later.

“Letters should have been sent out to tenant in arrears for maximum six months. No other company or institution would have let this go on for so long,” she said.

Her credibility is on the line, she said, making the situation all the more stressful because she has an eight-year-old daughter at home.

Tonia Williams was also caught by surprise after she has been paying her mortgage since 2004.

She was told her monthly payment would mostly be interest for the first decade, and as a single mom, she believed it.

“It wasn’t until 2013/14 I started questioning why it wasn’t going down. I left messages and no one returned my calls and I let it go. Each year, the same thing.”

“It seems and feels like I was and am being taken advantage of,” she said.

Executive financial officer Paul Rice sat down with The Eastern Door this week to try to allay fears.

“We will be delivering the preliminary report to chief and council after they reconvene after Labour Day,” said Rice, who added the investigator – who doesn’t want his name out publicly just yet – has 15 years’ experience in fraud examination and misappropriation of funds.

“He’s worked with government agencies and law enforcement entities. The individual is not employed by our current audit firm and is not from the community.

Marcy Delisle was also hired as a consultant this past week to help in the large file.

A total of 480 clients received letters from housing, including all mortgage, rental, home loan clients and social clients (rent to equity, Hope, etc).

“My intent is to obtain the clearest picture of what occurred within the housing department and with respect to client experiences, and the only way to do that is to sit down with us and tell us what your experience was,” said Rice.

“Come in and meet with us, tell us your story so we have an understanding what your experience was dealing with the housing department,” he said.

A call centre has been set up to contact housing clients, and Rice said they might be starting today (Friday), to answer questions and set up meetings with concerned community members.

“I just want to stress that it is the responsibility of the elected body who receives these monies on our behalf to have our best interest at hand, to be transparent and honest,” said Williams.