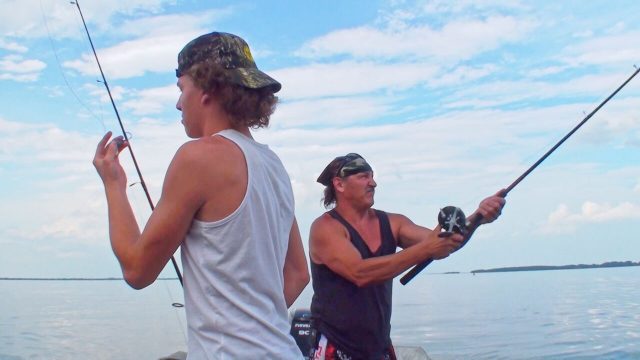 Nothing is going to put butts in seats in a cinema like a lot of Dirt (here with his son Rahniitsatorats), who will be on the big screen this weekend at screenings of Dirt McComber: Last of the Mohicans in Montreal and Kahnawake.

There is a place that is not blazing hot and unbearably muggy anyone can go for a break from the summer heat.

Lucky for everyone, Presence Autochtone/ Montreal First Peoples Festival has a full slate of films to check out if you’re in the city, and Kahnawake will screen two nights of incredible work featuring or created by local talent.

Jacobs’ star continues to rise. She was selected as one of the “rising stars” at the upcoming Toronto International Film Festival (TIFF).

Navaho filmmaker Shaandiin Tome’s Mud was one of the short films shown alongside Jacobs’ piece.

“It’s really awesome to see so many people here and get a sense of the community that’s a lot different,” said Tome, who lives in Albuquerque, New Mexico and toured Kahnawake Monday.

“Indigenous people suffer in many different ways, but we’re also tied together in terms of our spirituality and our beliefs. It’s interesting to be up here and feel that Indigenous community,” said Tome.

Those who missed Tuesday’s showing have a chance to check it out Monday at the Eastern Connection Film Festival, which is in its seventh year of showcasing local filmmakers’ work.

Festival staples Raohserahawi Hemlock, Goodbye to Me and Stolen Stories, Roxann Whitebean, Paradigm, and Tharonhianente Barnes, 4AM, will also show their latest creations, which are always an Eastern Connection highlight.

“Barnes and Hemlock are showing up with new productions that show off their tenacity in the film realm,” said festival organizer Marion Delaronde. “Devery Jacobs has submitted a film, which makes me very confident in the future of Indigenous filmmaking.”

Teiawennitathe Delaronde and Kayla Salas will join the veterans and make their festival debuts Monday at the Host Hotel.

Tomorrow night at Concordia University, viewers will get a chance to see a documentary that many have been anticipating for over a year since teaser trailers started coming out (this writer included).

At long last, Dirt McComber: Last of the Mohicans will play at Concordia’s Alumni Auditorium at 1455 Boulevard de Maisonneuve West at 6:30 p.m.

The documentary will follow in Kahnawake at the Host on Sunday at 7 p.m.

When asked how he felt about the film finally opening, the hunter, sturgeon fisher, lacrosse coach, and all-around colourful Kahnawake personality responded as only Dirt would.

“I’m not losing sleep about it,” said McComber, who was “cleaning fish” during the phone interview. “I got a game tonight. I’m trying to finish my series tonight.”