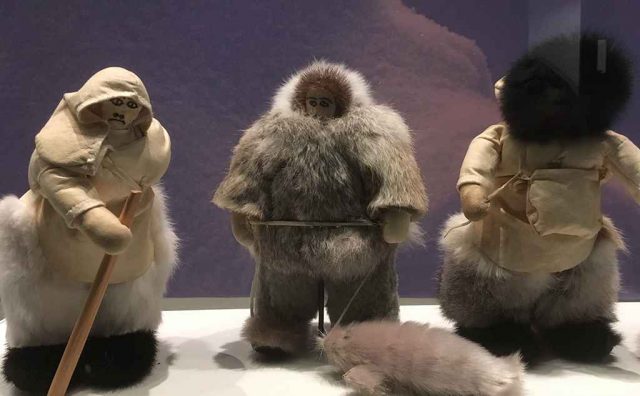 “It is said to happen from time to time,” is a traditional Inuk way to begin a story – the Northern equivalent of “once upon a time.”

But “once upon a time,” however, sets a story in the past.

This year “it is said to happen from time to time” was selected as the guiding title for Tillitarniit – the annual Inuit Arts Festival – to emphasize that everything in life is cyclical, and that storytelling knows no constraints.

The Inuit Arts Festival was marked by three days of festivities in the courtyard of Concordia’s FOFA gallery, where crowds gathered for storytelling and a rich cultural exchange to bridge these two solitudes.

The three-day spate of cultural activity and exploration is bookended by a continuing exhibition of Elisapee Inukpuk’s  intricately-made dolls – each representative of a different moment in Innu lore, or day-to-day life.

The dolls on display at the university’s downtown campus bring to life Unikkaangualaurtaa (Let’s Tell a Story) – a series of 26 time-worn stories and songs from Nunavik.

Born in Sarollie’s Camp, near Inukjuak, Inukpuk inherited a love of doll making from her mother, using her adopted skill to bring these traditional stories to life.

“I made one small doll, using a white stone from the seashore to make the head. It brought four dollars – four big dollars. I was surprised. At that time, the items at the store cost very little. I was so happy that I kept on making dolls,” reads an introductory quote from Inukpuk printed on the corridor wall.

Although she passed away earlier this year, aged 80, Inukpuk’s memory and artistic contribution was brought to this urban setting by the Avataq Cultural Institute, and her great-niece, multidisciplinary artist and Tillitarniit curator Asinnajaq.

Prior to the exhibit’s opening, Asinnajaq described her great-aunt’s work in Inuit Art Quarterly as an “incredible contribution.”

“Her work reminds me that my hands are precious tools, that I should keep them busy and that our stories are worth telling,” she writes.

During the festival’s three-day run, Asinnajaq – and other contributors – underlined some of the key Inuit cultural practices.

Families feasted on a spread of country food – fresh Arctic char and caribou, bannock, and tea – as well as “country games.”

There were performances by Inuit artists Beatrice Deer (who is also Mohawk) and the Sila Singers, as well as spoken word poetry by Taqralik Partridge, a writer hailing from Nunavik.

At nightfall, northern films were screened in the outdoor space while adults and children huddled together on pink carpeting.

In the spirit of “It is said to happen from time to time,” the performances – despite their roots in traditional northern values – drew comparisons to today’s urban culture.

Throat singing, for example, was posited as a Northern equivalent to today’s rap battles – a display of machismo between male warriors wanting to settle a score.  This was emphasized by pulling a beatboxer out of the audience to back up throat singer Evie Mark.

Although the cultural crossover resonated with curious audience members, there are some experiences singular to Inuit communities that aren’t so easily communicated.