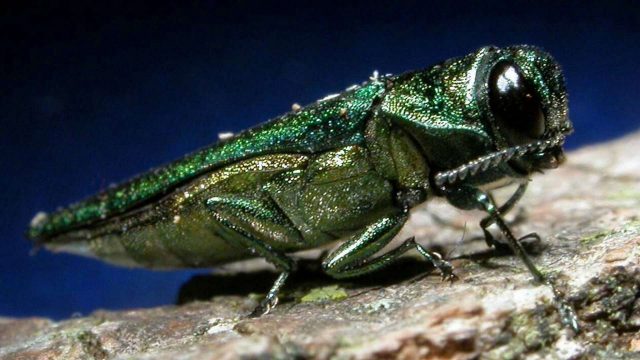 The little green bug may have met its match as Kahnawake’s Environment Protection Agency is now beginning a battle against the pest that is destroying the region’s ash trees. (file photo)

Emerald Ash Borers crawling through the bark of Kahnawake’s trees get ready, your free days of destruction are ending.

Christian Beliveau and a team from Services d’Arbres Primeau was in Kahnawake treating ash trees in conjunction with staff from the Kahnawake Environment Protection Office (KEPO) yesterday, using the biopesticide TreeAzin.

“Normally, it’s every two years that we do the treatment to guarantee the effectiveness,” said Beliveau.

KEPO discovered the borer’s presence throughout the community, and has been working for the past couple of years to come up with a plan to fight the invasive insect.

“Now we’re getting into the phase where we’re actually treating some of the trees,” said environmental inspector Lance McComber. “Over the last year or so, we got all the information where the black ash is, verified different ash trees, and in the last two weeks me and Cole (Delisle) have been out at the different sites looking for different ash trees and which ones could be saved.”

The Eastern Door has extensively covered the environmental impact of the invasive green beetle transported from Asia and first detected on Turtle Island in 2002.

Without action to fight back against the borer, Kahnawake’s plentiful ash trees used for traditional basket making would be no more within a decade.

Around 40 treated trees near the Sports Complex, Big Fence area, Alwyn’s Park, the Protestant cemetery, and Mohawk Trail Park have been marked with ribbons, and after treatment have syringes sticking out of the base of the tree.

KEPO is asking community members not to touch the trees being treated.

The trees will be used for seed stock, and were chosen based on their health, relative value within the park, and the plants’ current health.

TreeAzin is made primarily from seed extracts of the semi-tropical Neem tree, and has been used for centuries as a natural insect control. The pesticide does not affect birds or other creatures that eat the Emerald Ash Borer.

“The only thing that it does to the bugs is sterilize them, so they can’t reproduce during breeding season,” explained Beliveau. “That’s how it protects the trees. The insect itself won’t leave the tree if it’s already there, but at least it can’t reproduce because the larva of the insect is what creates the galleries that damage the bark and eventually kill the tree.”

Beliveau said the product has been used in Canada for the past half-decade with promising results.

“The trees that have been treated six years ago, that our company treated, are still 100 per cent healthy,” he said. “It’s a biopesticide, so it’s a very small percentage of active pesticide that can be dangerous, but it’s a small, small percentage of the product.”

Treated trees will require follow up treatment every year during the EAB infestation.

KEPO summer student Cole Delisle was in the field with the team, and worked on the borer project last year with Kenneth Canadian. For someone tasked with monitoring environmental degradation and destruction of habitats, he was happy to be part of something that will have a positive effect on Kahnawake’s environment.

“It feels good,” Delisle said, with a laugh.