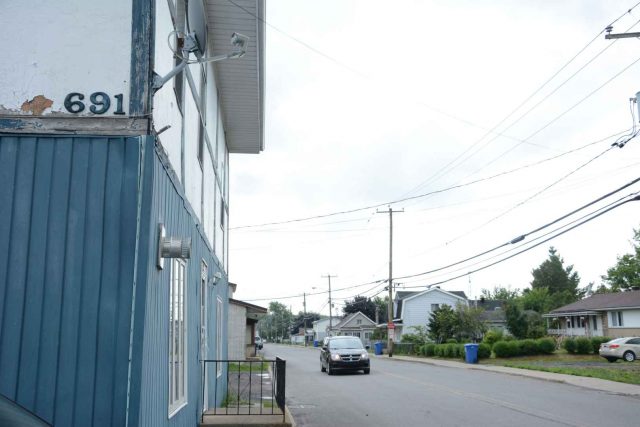 If your house is burning, someone is drowning or an important package is being delivered, knowing where you live is vital, according to emergency services personnel. The blue house on Old Malone Highway is one of the few with a number indicating its lot. (Daniel J. Rowe, The Eastern Door)

“We know that minutes can make a big difference in an assault, in a fire and in a medical emergency,” said Mohawk Council of Kahnawake Public Safety Unit director Arnold Lazare.

After identifying a number of gaps in emergency service responses, the PSU, along with other emergency services stakeholders, announced a working group to create a Kahnawake Housing Identification System for emergency responders this week.

The street naming and housing identification project is something desperately needed, according to Lazare and others in emergency services.

“I stay up some nights wondering how to resolve the situation and the street-naming and house identification project for emergency services will allow me and other people to sleep better,” said Lazare. “It means that people will have a rapid, efficient system of identifying where they are.”

There are no plans to install street signs, and Kahnawake residents will be informed of their residence’s identification. Public building identification numbers will be posted as reference points as well.

“If we don’t know where you live, how does that help us because we know you’re not in the Post Office in that little box, so where is that?” said PK chief Dwayne Zacharie.

Kahnawake Peacekeeper chief Dwayne Zacharie said the project is about safety and that suggesting Kahnawake is moving towards a municipality as a result of having building identifiers are unfounded.

“We don’t want to be a municipality, we don’t want to look like that, but for the sake of safety and security of our community members, we need to develop something that’s going to work for all of us,” said Zacharie. “Let’s put it this way, would you rather your police, ambulance and fire service know exactly where you live, or do you want to leave it up to Tony’s Pizza?”

Zacharie and Lazare added that the community has already been mapped by outside organizations.

“If you go on Google Maps, you can go and look at our community, and they’ve already put names to most of the streets in our territory,” said Zacharie. “Do we want to leave it to them or do we want to have a say in what our community looks like?”

Once unnamed streets, multiple names for locations, and other issues are resolved, Lazare said, community consultation will happen when naming roads.

“There’s going to be systematic vetting of the names,” he said.

Zacharie added that many in the community have house alarms, medical alert systems and other emergency protocols, and the companies responding to alarms call the PKs. The companies, however, often only have a mailing address with a P.O. Box associated with the name.

“If we don’t know where you live, how does that help us because we know you’re not in the Post Office in that little box, so where is that?” said Zacharie.

“We’re always going to be the first responder no matter what because we always have boots on the ground, people in the cars; so one of those alarms goes off and they call us, if it’s a box number, how quick can we actually get there if we don’t know where you are?”

In addition, community members’ names are not always unique.

“How many John McCombers are there in this community?” asked Zacharie. “If they say it’s John McComber and we don’t know who it is, which one is it? That’s why we have to develop a system with street names, numbers and that sort of thing.”

“There are many, many people in the community, who have the means to build dwellings without getting a loan,” said Zacharie. “And they don’t have to tell us that they’re even building a house.”

As part of the house identification project, residents will not be required to post their residence number, as the system will be internal.

“As long as the resident knows that’s their location, they’re going to be found immediately,” said Lazare, who said he was asking for a map since he was fire chief in 2008.

Currently, the PKs rely on their collective knowledge between officers of where everyone in the community lives. For example, if there is a gap between what Zacharie and another PK knows.

“We’re relying on the fact that between us we’re going to be able to cover it off, and that has to stop,” said Zacharie. “Once we start thinking that there is that gap, then there’s a problem.”

Lazare said the program has nothing to do with taxation, bill collectors or anything of that nature.

“It is consensus among emergency responders services that this is an item that will benefit the community,” said Lazare.

“This is important to this community and we need it out there how important it really is,” said Zacharie. “Damn the conspiracy theorists. It’s not about that.”