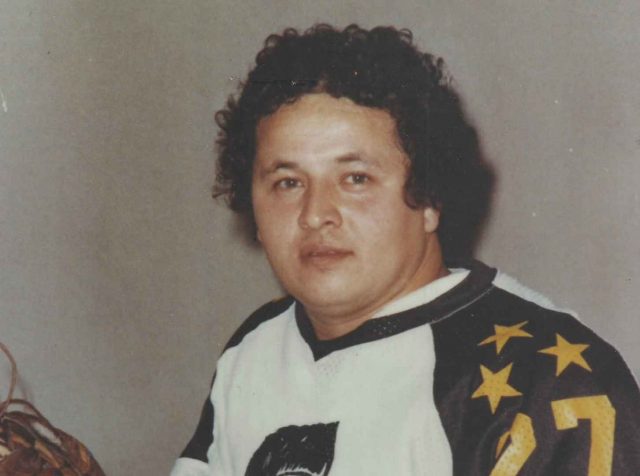 Tiorahkwáthe Gilbert was as passionate about Kanien’kéha as he was about sports like lacrosse. He worked tirelessly to promote the language wherever he went. (courtesy Dodie Gilbert)

His family sat down with The Eastern Door this week to speak about his life that was cut short dramatically at the family’s swimming pool.

Tiorahkwáthe was the eldest of Tahaiahse Jack Gilbert and Konwenni Norton’s nine children, and was raised with Kanien’kéha as his first language.

When asked what his legacy would be, his wife Dodie and two sons Kaniatarí:io and Kaniehtaké:ron did not hesitate before answering.

“More so than anything,” said Dodie.

Tiorahkwáthe left high school before graduating to work in construction with an uncle.

“His father put him on the bus and sent him to Buffalo to go find a job,” said his eldest son, Kaniatarí:io, 40, a judge in Arizona.

He worked construction then ironwork, and completed his secondary and post-secondary schooling in the evenings and weekends, attaining a teaching certificate from McGill University.

Tiorahkwáthe married Dodie Hamelin in 1972, and the couple’s two sons followed: Kaniatarí:io in 1978 and Kaniehtaké:ron in 1982.

After gaining his teaching certificate, he taught at Kateri and Karonhianónhnha Schools. His family regularly hears from former students who remember their teacher fondly.

“He gets a lot of respect from people,” said Kaniehtaké:ron. “I get that all the time: ‘your father was my favourite teacher.’ He was more of a hands-on teacher. He brought you outside and taught you directly through nature walks and song; he loved to sing.”

In 1996, Tiorahkwáthe switched careers and ran for and won a seat at the Mohawk Council of Kahnawake table.

“I think it was to promote language from a different perspective,” said Kaniatarí:io.

“He saw that language wasn’t in a good spot,” said Kaniehtaké:ron. “It was a dying language and he probably wanted to go and promote it more and get more awareness out there.”

His passion for the language extended beyond Kahnawake’s borders.

“He worked on language in other Kanien’kéha communities, but also other nations in Canada and the US,” said Kaniatarí:io.

Their father believed he could teach basic pronunciation and reading skills to anyone willing to learn.

“He had this thing where he said through language he could teach anybody to read and write in six to eight days,” said Kaniehtaké:ron. “Tiora-phonics he called it instead of hooked on phonics.”

Tiorahkwáthe once spoke exclusively Kanien’kéha from his mother’s birthday in July to the anniversary of her death in November.

“It was three or four months,” said Kaniehtaké:ron.

Along with language, Tiorahkwáthe was passionate about lacrosse, hockey and golf. He played on Akwesasne’s old sticks team, and was inducted into Akwesasne’s sports hall of fame.

He was always proud of a  Masters Championship win in Vernon, BC in 1992, and was part of the inaugural North American Indigenous Games (NAIG) Team Kahnawake squad that went to Edmonton in 1990. He actually wound up playing with the Squamish nation’s lacrosse team.

In 2006, Tiorahkwáthe fell ill with Guillain-Barre syndrome, a rare disorder where the body’s immune system attacks the nerves. The malady forced him to retire from the Mohawk Council after five terms in office, and started a long and trying road to recovery.

The birth of Thahnhahténhtha the same year, Kaniehtaké:ron and Jessica Hernandez’s son, motivated Tiorahkwáthe to recover.

“He was his medicine to recover from his health issues,” said Kaniehtaké:ron. “He said I have a grandson now. I’m going to have to.”

The couple had a daughter, Iehwatsirahní:rats, six years later.

About a year later, Tiorahkwáthe returned to teaching in Akwesasne for a year. coaching the Salmon River Shamrocks hockey team as well.

As Kaniatarí:io said in his eulogy, “he dedicated his life to revitalizing and advocating for the Kanien’kéha language. He always tried to share his knowledge with his community and people, and would talk to anyone who would listen.”